Stocks slid on Friday as the headlines continued to accentuate a bunch of negatives… The virus (front and center), broken trendlines in the indexes, cancellation of advertising dollars to FB by a long list of companies that are expressing their disgust with how FB and potentially other social media sites deal with hate speech, fake news, political garbage, a Biden/Democratic SWEEP of the whole executive branch, and then the comments by FED Vice Chair Randy Quarles about the health of the banking system post the latest stress tests continued to take a toll on the banking sector… Recall that he made it clear that banks were to hold dividends at current rates and that they had to continue the suspension of stock buyback programs into the third quarter in order to  ‘conserve cash’ in what is becoming an increasing unstable environment.

The headlines continue to reveal that the feared resurgence in corona-virus cases is alive and well and hitting some of the southern and western states hard… TX, FL, AL, AZ, CA all reporting ‘substantial increases’ in cases and this is raising the fear that we may have lost control of this latest outbreak. As the day came to a close and the weekend was upon us the markets were left in shambles as many wondered what the news would be over the weekend… were the numbers going to get worse? Were more states going to join the crowd? Would we see a spike in hospitalizations and deaths?

Talk of closing down some businesses again in TX and CA turned into a reality on Saturday and has investors, politicians, and the FED worried as well. Over the weekend, FL announced that they are closing the beaches and bars for July 4th from Fort Lauderdale to Miami in a bid to slow the spread. I’m sure that by Wednesday they may announce complete closures of the beaches and bars along the southern east coast of the state – say from Port St Lucie south.

And then the Biden/Democratic sweep talk – (no, not sweet talk – SWEEP talk). What would that mean for the markets? Immediate rollback of the Trump Tax Cuts, Corporate Tax Rates to move up to 28% (which btw – is now supported by Ex Goldman partner and former WH economic council head – Gary Cohn – he must be looking for another cabinet position). Individual tax rates to surge, spending on social programs to surge, restoration of the SALT deductions for high-tax ‘blue states’ (which will be offset by higher individual tax rates), talk of cabinet appointments for Lizzy Warren and Bernie Sanders (both far left) will drag the whole Biden administration off center to far left as well if he wants to grab the far left millennials that supported Warren and Sanders. The markets then need to re-price what that means for stocks and for the country. The tech, banking and energy sectors will end up right in the bullseye as they try to dismantle or re- regulate those industries. So, as I pointed out last week, it is now July – we have 4 full months of campaigning left, Biden has yet to announce his running mate –although we know for sure that it will be a woman of color. That conversation is well documented – and I say that because when Amy Klobuchar took her name out of the race, she made it very clear that the Democratic ticket needed to include a woman of color as VP, but until that announcement is made – it remains speculation.

We can only speculate on who it might be – Susan Rice, Stacy Abrams, Val Denning, Kamala Harris, Keisha Lance Bottoms, Tammy Duckworth?

It should be noted that on Friday that number was 45,255 and the CDC reports that 80% of all cases are mild or asymptomatic, 15% are severe infection and 5% are critical infection…

“More than 500,000 People Have Died from Coronavirus Worldwide as Infections Continue to Surge”

They also confirm that more than 10 million people around the world had or have it and that the US does account for more than 20% of all reported deaths followed by Brazil, the UK, Italy and France.  Additionally – the WHO (World Health Org) is re-iterating that the pandemic is accelerating and has entered a “new and dangerous phase.”

And not be left outdone – Bloomberg hits us with –

These headlines suggesting that this 21st century pandemic is stronger than ever… and every one of these headlines suggesting that there is no end in sight for now. And notice the words – they cause the ‘smart logic algos’ to panic as well… as they can only read the words without really understanding the intonation of how the word is used in the sentence… and while the results are ugly – let’s be clear on this too… by comparison – the 1918 flu pandemic infected more than 500 million people globally and killed at least 50 million – of which 675,000 were Americans. And the 2009 H1N1 flu pandemic infected 60 million people globally and the CDC estimates that it killed nearly 570,000 of which only 12,500 were Americans.

I am not downplaying this at all, I am just offering some perspective on prior pandemics so that we understand this current pandemic. Remember, watch the current hospitalization and death rates vs. the number of ‘new infections’ – those stats are more indicative of the damage being done by covid19.

Chesapeake Energy filed for bankruptcy protection – Now while it is a headline today – it has been speculated that they were going to file anyway… so this is not an earth-shattering announcement. The stock – CHK – is down 89% since January as the oil and gas price beating – amplified by the corona virus ‘proved to be the final blow’ for this shale drilling energy company.

And the FB news? Seems like Zucky finally started to listen to what everyone has been screaming about and so in a move to pull advertising dollars away from FB at least 20 companies that include: Ben & Jerry’s, Unilever, Verizon, North Face, Eddie Bauer, Arc’teryx, Patagonia, Lululemon, Coca-Cola, Levi Strauss have clearly made an impact. It seems that Marky and Sheryl have decided that they “would start labeling political speech that violates it rules and take other measures to prevent voter suppression and protect minorities from abuse”. OK – that’s a start, but what about hate speech? What about violence? So much more to do… and my guess is that if you don’t hurry up – there will be a bigger price to pay.

In Europe – stocks got off to a weaker start but have since tried to balance out the covid19 news. There is also no eco data across the continent that will drive the markets so investors remain braced for more ‘risk off’ as virus cases rise with no end in sight.

US futures have been all over the place – lower most of the night but have turned just a bit higher at 5 am. Investors trying to put this all in perspective as the media drives home the idea that we have lost control. Health and Human Services Secretary Alex Azar sending out a warning yesterday that the ‘window is closing’ for us the US to curb the outbreak. In his statement he said –

“as a doctor, a scientist and an epidemiologist, I can tell you with 100% certainty, it is a real increase…”

And so it is… you have to decide – what you think… either you’re in the camp or you’re not… but either way – the number of cases is rising while the number of deaths are declining….recall the CDC stats – 80% of the cases are mild or asymptomatic, 15% are severe and 5% are critical…

Look – we know that the markets price risk – they price it into the future… and when the market feels uncertain the path of least resistance is always swift and lower… because when the market senses that it knows what lies ahead – good or bad – it can function more smoothly – it can take the data, the guidance and the sentiment and re-assess what that means… the issue now is that while there is data – it is not good, there is NO profit guidance from public companies, and there is hysterical guidance from scientists and that continues to cause angst and anxiety for the markets.

Eco data today includes Pending home sales m/m is expected to be up 18%.

Oil – as you expect is under pressure as the story continues to paint a dire picture. Increasing cases must mean that demand will dry up… (laughable in the longer term). Today yes, that is the story, but if suddenly we see US cases begin to retreat, then the story will be all about how demand will surge as the US begins to re-open again… blah, blah, blah… Stick tight, stay with the plan… Oil isn’t going anywhere… It is currently off 21 cts at $38.18 with trendline support at $35.78…

S&P closed at 3009 – as it tested trendline support at 3020 a couple of times before failing and then plunging down and through… The next trendline support is at 2980… and this is a holiday shortened week… markets are closed on Friday. It could go either way… again depending on the conversation. 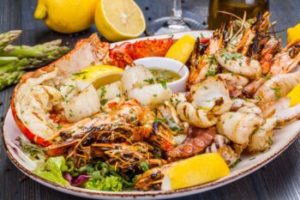 Summer is here! What a spectacular weekend here in NY… and as such – it is time to really spark up the grill and start the summer right. Today’s dish is both lobster and shrimp – done on the grill… wrapped in foil, seasoned with garlic, lemon, parsley and a splash of olive oil (just like a scampi)… so simple to prepare and even easier to make.

For the marinade you will need: 6 garlic cloves, some Italian parsley, freshly squeezed lemon juice and lemon zest, and the olive oil. For the seafood – 1 doz lg cleaned and deveined shrimp, and 2 lobster tails.

In the food processor – add the garlic and some of the parsley…pulse to mince and mix well. Next – add in the juice and the zest of one large lemon and a splash of olive oil. Pulse to mix and then remove. Set aside.

Next bring a pot of water to a rolling boil and blanche the lobster tails for 3 or 4 mins… remove – rinse under cool water and set aside. Once cool – cut open the tail lengthwise and spread… (do not completely pull it apart – leave the meat in the shell). Now – massage the marinade all over the shrimp and the lobster – allow it to marinate for 30 mins or so….

Spark up the grill. Make an aluminum pan out of ‘heavy duty’ aluminum foil – folding up the sides and creating a place for the shrimp and lobster to cook.  Add the fish – toss in some lemon wedges, a couple ‘chunks’ of butter, a splash of white wine and place on the grill.   Cook on high heat until the fish is cooked – no longer than 5 mins… Do not puncture the foil – keep all the juices in the ‘pan’. Serve with your favorite chilled white wine… in fact try a popular summer Rose. Delish…