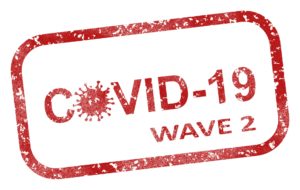 Global Markets tore it up on Monday… and then they gave some back on Tuesday! – European markets ended their day – Tuesday – down about ¾ to 1% across the board and US stocks followed… Financials, Industrials, Consumer Discretionary and Real Estate all leading the way lower… and while Tech came under some pressure – it was less so than some of the other sectors – as the market was only consolidating and not panicking… this again making sense as it is Tech that is changing and has changed the world.

So they took the positive story from Monday and flipped it on its head for Tuesday… suddenly the virus cases that no one seemed to care about on Monday got mixed up with some gloomy economic forecasts on Tuesday as a range of Dr.’s, scientists, and analysts made it clear that while we are making progress – we have a ways to go before we are out of the woods…

Airlines came under pressure as it becomes clear that they are getting ready to CUT thousands of workers and then knock on the gov’t’s door for MORE money as the surge in the virus runs rampant over the country. The WSJ runs with this headline –

The story goes onto say that the recent quarantine restrictions initiated by the tri-states (NY, NJ & CT) for anyone coming to that part of the country has once again slammed travel. United Airlines announces that net bookings are now 16% of what they were last year… not fallen by 16% – they are 16% – which really means they are down 84%! The ETF – JETS – $16.30 – fell by 3.9% yesterday – leaving it just sitting on its trendline. A look at the chart reveals that you have the shorter term trendline moving up while you have the intermediate trendline moving down and they are about intersect… catching the most recent stock moves caught between the two trendlines –  forming a triangle between the two – so keep your eyes on this because it’s about to break down or break out! A break down thru $15.76 could see it test the lows of March and May ($11.80) while a surge up and thru $17.25 might see it go to the June highs of ($22)… so are you a bull or a bear on this one?

Someone call the AMZN police!!!

AMZN did come under some pressure – falling $57 – partly because of the new high it achieved on Monday (think consolidation), but also because WMT announces a new online shopping portal – WMT+  that is set to go head to head with AMZN’s Prime Membership program… after the announcement at 11:30 am  – WMT surged by 6% or $8 to end the day at $127 – surging through trendline resistance at $122.35 – setting this one up to challenge the highs of April at $133… The new service will look like AMZN – it will be a membership program, they will have same day delivery, you will be able to buy gas at a discount at any WMT gas station and their annual membership program is priced $20 below AMZN prime… Just an fyi – in the 15 yrs that AMZN prime has been around – they have more than 150 million worldwide subscribers… generating revenues of more than $19 billion in 2019…

Next up is some banking news… JPM and BAC are both due to divvy up some $2.6 billion in fees generated by the gov’t aid programs – while more than 4000 national banks/lenders will split up to $24 billion in processing fees generated by the Paycheck Protection Program that was launched during the crisis… and what is interesting here… did you see the some of the recipients yesterday of the program… just more BS on who got to benefit vs who should have benefitted (think ties to Trump were big beneficiaries) – to soften that blow though, JPM, BAC and WFC did say that they would donate any of the profits they do make… to assist the communities and small businesses that they serve. (Bravo).

And expect to hear more about FB today… after yesterday’s vitriolic meetings between the advertisers, the ADL (Anti-Defamation League) and the NAACP (National Assoc for the Advancement of Colored People) – each one of these groups essentially had the same reaction… Disappointment! Comments like – “FB is not ready to address the hate on their platform”, and “We saw little and heard just about nothing about how the social network is planning on removing toxic content” and “FB approached our meeting today like it was nothing more than a PR exercise”. Essentially – both Marky and Sheryl failed to agree to a single demand… and apparently failed to see what everyone else is seeing. It will be interesting to see what happens next as more and more advertisers pull out of both FB and Instagram and the tone of this argument heats up.

US futures are essentially flat this morning… Dow futures are down by 62 pts, the S&P is off by 5 pts, the Nasdaq is flat and the Russell is looking 6 pts lower… the only economic data point today is Mortgage Apps and that will not be enough to sway anyone in either direction… the focus will once again be on those individual stories above along with more bio-tech news of possible therapies and vaccines… and how new closures across the nation are affecting the planned re-opening of the US economy… Summer is now in the mid-point – decisions have to be made about school re-openings or not and then what parents are going to do depending what decisions are made… Remember – the country can’t get back to work if schools don’t or can’t reopen… parents can’t leave kids home alone unattended to go to the office and businesses can’t expect that workers will be comfortable with going to an office if they remain fearful of their health.

It’s all a tangled web we weave – which speaks to where stocks are right now… have the markets gotten just a bit ahead of themselves? I think we know that answer – so don’t be surprised if we see continued consolidation until we begin the formal beauty pageant – 2nd quarter earnings – which start next week… Have investors already discounted what is expected to be another miserable quarter? Have investors already discounted the 3rd and 4th quarters as well? Will companies offer any guidance at all? Can they offer any guidance at all? (just fyi as of this morning there are at least 40% of the S&P 500 companies that have already said “We can’t give you guidance!) Are these companies re-investing in their businesses? What will sales growth numbers look like?  What are margins going to look like? Can some of these companies go back to the public markets to raise cash or not?  So many questions… and not so many answers…

Next – Can investors really believe what they hear as so much will be dependent upon how the virus story unfolds… Is there a therapy or vaccine coming? When will it be available? News headlines this morning tell us that there were 60k more US cases were diagnosed just yesterday while Novamax tells us that they are prepared to deliver 100 million doses of a ‘their vaccine’ by January IF it passes the clinical trials… which we still don’t know yet – so can we really say that they HAVE a vaccine? Other bio-techs that are in the race say the same thing – yet none of them has a vaccine that has passed all trials… so this is still very much a question.

Cities around the country are re-thinking the re-openings of bars and restaurants and other small businesses… These and other questions will be the directional drivers for the next month… and if the disappointments are worse than expected – then expect the ‘fluff’ to really come out of the markets and if the reports are as expected then expect some of the fluff to come out of the markets… as investors re-price stocks… again – that doesn’t mean the game is over at all… it just means get ready for more volatility and good names that get beaten up will be the silver lining in the black cloud.

European markets area all lower… and today it is the surging global virus cases that is driving the sentiment as it raises the prospects of a more long and drawn out global economic recovery… Chief Economist for the IMF (Int’l Monetary Fund) Gita Gopinath once again warning the world that ‘many countries may need to restructure their debt in the aftermath of the pandemic as borrowing surges’. And coming earnings are having the same ‘cautious approach’ as here in the US.  Investors there are also asking the same questions and waiting for the same answers. As of 7 am – the FTSE is -0.08%, CAC 40 – 0.8%, DAX – 0.52%, EUROSTOXX -0.69%, SPAIN -1.2% and ITALY – 0.44%.

Oil – is down 7 cts at $40.54/barrel… and this is because they are ramping up the virus ‘lockdown’ story again… suggesting that it will dampen any recovery in demand… but in reality – oil is holding its own… it’s been in the $36/$42 range for nearly two months now as the story goes from demand surge to demand collapse… which tells me that oil is comfortable right here… Production cuts by OPEC and OPEC+  are beginning to take root – supporting prices and investors really do believe that once the world wakes up – demand will surge.

The S&P closed at 3145 – after trading as high as 3184 – further weakness today could see us test the 3130-ish zone where it should find some near term support – but depending on the headline, we will see if that holds… Remember – it’s all in the perception and tone of the headlines… which only means that you should stay the course, talk to your advisor and if you don’t have one – talk to me. 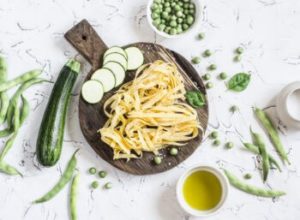 This is a simple dish to make – had it on Saturday night when we hosted some friends for dinner – takes all of about 20 mins.  For this you need:

Heat up a large sauté pan – add some oil and 3 cloves of chopped garlic. Allow to cook for a couple of mins.

While this is happening – peel and dice the onion.  Add to the pan…stir to coat – turn heat to medium.  Next trim the zucchini on both ends.  Cut in half and then dice.  Use equal amounts of green and yellow zucchini.  Season with s&p, add a dollop of butter, stir to coat – reduce heat to med. Sauté for about 15 mins…

Bring a pot of salted water to a rolling boil and add the linguine.  Cook for 8 mins or so…taste – you want it to be aldente.  When ready – strain – reserving a mugful of the water – and add directly to the sauté pan with the zucchini.  Mix well – add in two handfuls of the shredded parmegiana and mix so that the cheese melts. If it appears to dry – add back ½ the mug of pasta water – stir to coat.

Serve immediately with your favorite white wine. Always have extra cheese on the table for your guests.