Twitter Gets Hacked and Celebrities Get Whacked…/Try the Pulled Pork

And they just keep going… First it was the Moderna news about the very positive results they got from their clinical trials concerning the virus vaccine that sent futures soaring, Moderna soaring (MRNA +7%) and the Biotech sector (XBI) soaring… up 2.1%… and then it was Goldman Sachs – as they reported not just good numbers but numbers that are still leaving many analysts scratching their heads that sent that stock (and the financial sector) surging… GS + 1.4% and the XLF +1.98% – in fact this morning WSJ piece says it perfectly –

“Nobody is better at capitalizing on market chaos then Goldman Sachs Group Inc.”

Operative word – CHAOS (much of it created by none other than GS et al.)

In another confirmation of what the volatility has done for the big Wall St banks – GS reported its second highest quarterly revenue EVER! $13.3 billion resulting in earnings of $6.26/share vs. the expected $3.90/sh… Now, like its cohorts – JPM, C, WFC, etc. – they also set aside a higher than normal amount for loan losses/defaults in what they also expect to be a longer and deeper recession.  On the conference call – CEO Davey Solomon had this to say –

“We became super busy because our clients were super busy”… (Profound…)

What you need to understand about the trading side of their business is that like the other big banks – GS has encouraged ‘the street’ to send their order flow to them via the Icon on all of the trading desks at big institutions around the country… Essentially – what they and the other big banks have done is ‘bastardize the system’… order flow no longer goes to the open public markets the way it always did – it first flows to the big banks ‘algorithmic trading desk’ manned by nothing more than hi-speed computers – via the app – allowing the big banks to do a couple of things – 1. See what the flow is, see what the big institutions are doing etc. and then 2. The computers react to that flow – they trade against it or they attempt to pair it off against conta-side flow keeping it all ‘in house’ NOT exposing it to the public markets – thereby doing two more things… 1. Weaken the public markets by taking flow out of the system and 2. Capturing both sides of the trade thus charging and collecting commissions from both the buyer and seller (I mean you can’t blame them for that – the system/regulation has allowed for that… it’s just business – not personal…)

Now mind you – this is NOT new… it has only gotten more sophisticated and with the advances made by technology – it has become even more ‘efficient’, so when we get the volatility that we got over the last quarter and institutions increase their level of trading (call it risk management)  – this is what you get… an explosion in trading revenues that pales in comparison to quarters when volatility is low and the news is benign. Essentially what ALL of the big banks have done – is hold the system hostage – forcing clients to play the game in a way that guarantees that the majority of the flow gets directed to ‘the family’ (think GS, JPM, MS, C, BAC, WFC, UBS & DBK) via the icons on trading desks across the country and not to the open markets. And then if those banks don’t want to trade against it, or match it with contra side interest – they then ‘sell’ the flow to the wholesalers (think Citadel) and the same thing happens again – until such time that the scraps (or leftovers) then get sent to the open markets. (and what you need to understand is that this all happens in microseconds) and let’s not even talk about what the retail brokerages do with all of that retail flow that comes to them via apps that have democratized investing for anyone that wants to open an account… Welcome to the 21st century… It is a far cry from how the capital markets operated – but then again – the world has changed…

In addition, we got good results from the likes of BK, USB, UNH, PGR, and AA… all beating the estimates…

On the economic data front – we learned that the news is good! Mortgage apps surged, Empire Manufacturing surged, Import Prices surged, Industrial and Capacity Utilization surged and that the FED’s Beige Book revealed that economic activity around the country – in every one of the 12 regions – also surged… but emphasized that it remains well below where it was prior to the pandemic… so that is both good and bad… but for yesterday at least – when all of the earnings and macro data news was good and we got very good news on the vaccine front – investors and algos went all-in… by the end of the day – the Dow added 227 pts or 0.85%, the S&P added 29 pts or 0.9%, the Nasdaq rose 62 pts or 0.58% and the Russell rose 50 pts or 3.5%!

Now this morning – pay attention… because guess what markets and futures are doing after 4 up days? (Two words – first one begins with an S and the second one begins with an O…) and much of that action being driven by more talk of lockdowns and closures across the country and a very visible hack on Twitter  Blue Checkmark Accounts – which brings up the whole ‘coordinated social engineering technology attack’ conversation… which highlights the whole issue about the social media site and tech in general… and in an attempt to shut it down – TWTR was NOT successful initially… but finally was able to stop it… this is where the news on one company is going to be blamed for the overall weakness in the markets… some of the infected accounts include but are not limited to Joey Biden, Barack Obama, Billy Gates, Jeff Bezos, Elon Musk, Apple, Uber and even Kimmy and Kanye Khardashian got drawn into the fray… (Kanye Khardashian – a.k.a Kanye West).

US futures are down… Dow futures are off 165 pts or 0.6%, S&P’s -22 or 0.7%, Nasdaq -142 pts or 1.34% and the Russell off 3 pts or 0.2%. Now notice Nasdaq is getting hit the hardest in the pre-mkt… makes sense, right? TWTR is a tech name and the hack just reignites the whole privacy/security issue… so if TWTR can be hacked, it suggests a massive breach of security… and that then means – who’s next? I would expect cyber/security names to get hit today on the back of this hack… but let’s see…..

More talk of new lockdowns across the country – even as we celebrate the good news on the vaccine… is also driving sentiment… because in the end – any vaccine is not really expected to be available until at least late 2020/early 2021… so while we celebrated the news yesterday, we are more concerned about it today…

JNJ just reported and guess what? They BEAT on the estimate and they are upping their full year guidance! Now that’s a big deal… JNJ is not only offering guidance, but they are upping their prior guidance… strong performance of their pharma division and medical device division… the stock is quoted up $1 in what feels like will be a down day.

BAC also just reports and they too beat on the bottom line, as well – but the news is still hitting the tape – so expect more analysis as the morning begins… Provisions for bad loans of $5 billion… Trading Revenues are strong… +50% y/y, in fixed income and up 7% in equites… expect more on this as well.

In Asia… China reports that 2nd qtr GDP grew by 3.2% y/y – (that’s good) and it beat expectations of +2.5% – but in the meantime – Retail Sales in June fell by 1.8% vs. the expected 0.3% growth. And in a bid to become the pre-eminent player in the chip market – SMIC – China’s largest chipmaker – had its ‘opening debut’ on the Shanghai stock exchange – and that stock surged by 245% on its first trade and ended the day up 202%. This is important for China – this semiconductor manufacturer is seen an important player in Beijing’s ambitions to become the global leader in semiconductors. Now put this in perspective – this was a small deal by US standards – while it sounds big at 46.2 billion Yuan – it converts into a $6.6 billion deal – but what it did do – was put them on the map and allow them to compete with the likes of TSMC and Samsung Electronics… both with ‘far more advanced capabilities’. But – none of that helped the tone… By the end of the day – Japan -0.8%, Hong Kong -2%, China – 4.8% and ASX -0.7%.

In Europe – stocks began the day lower as they react to weaker Asian trading and as they await the latest news from the ECB (European Central Bank) over what’s next for the bond buying program… the expectation is that they are not announcing any change to current policy… and so this is giving the algos a reason to ‘take some money off the table’ in names that have outsized advances… (think tech… for the most part). Add in the surging virus cases in other parts of the world and you get the picture, right?  As of 6:15 am – the FTSE -0.54%, CAC 40 – 0.8%, DAX – 0.6%, EUROSTOXX – 0 .7%, SPAIN -0.25% and ITAY – 0.14%.

OPEC agrees to ease up on production cuts… thus will add more supply into the system… this was not such a surprise at all… and so oil is slipping just a bit… but don’t worry – this is after a big UP day yesterday that saw oil rise by 1.75% to $41/barrel.  This morning oil is trading down 47 cts at $40.72… leaving us smack in the middle of the $35/$45 range that we have been discussing…

The SPX closed at 3226 after having traded as high as 3238… A new intraday and closing post-pandemic high, but still below the year high achieved on February 18th of 3375… we are getting closer to filling the gap created on February 24th… a gap that saw the S&P decline by 100 pts on the opening on February 24th… and it is that gap that needs to be filled… Now that won’t happen today – but it will happen… I suspect it will be because of more positive vaccine news… at some point this summer… whether that is from JNJ, REGN, NOVX, MRNA, PFE, AZN or someone else… 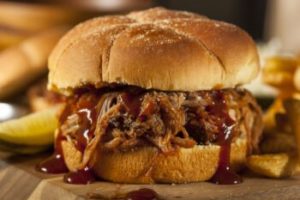 Cook for 8 hours – remove and shred with a fork reserving the sauce for the sandwich!