Maybe it was a Kamala Rally? Try the Ratatouille 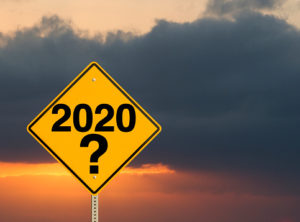 The S&P once again flirted with the all-time highs yesterday after it came under late day pressure on Tuesday… Questions about what caused that late day selloff on Tuesday ranged from continued concern over failed negotiations between the WH and congress, a rise in covid infections, weakening eco data across the Eurozone to the expected announcement of Kamala Harris as the VP candidate joining Joey Biden – recall – the official announcement came out after the bell rang on Tuesday, but the leak came out at about 1:30 pm – and that is curiously the same time that the market began to fail…

Futures had been up in the early morning hours and continued to go higher as the day wore on and the ‘Kamala’ stories started to flood the newswires… The noon time ‘official’ announcement featuring both Biden and Harris together caused excitement as the run for the WH is now set… talk of Harris being a more center moderate candidate (vs. the far left Bernie type) helped to fuel the move – but let’s be clear – she is left of Joey but not as far left as Bernie/Lizzy.

In the end there wasn’t much else that changed that we can point to… I mean – virus cases continue to mount, there is still a stimulus stalemate in DC,  the Russian vaccine story died a natural death, millions remain unemployed, mortgage rates beginning to tick ‘up’ (I mean we can talk about what up really means), rising corporate bankruptcies and eco data suggesting that inflation may be ready to rear its ugly head – can’t be good, but yet – investors were taking the markets to new highs…even the Nasdaq which had been under pressure for a couple of days did an about face and rocketed up 2.1% or 230 pts… and so now – the fight begins and while there are only 83 days left until the election – it feels like it’s gonna be a volatile, tense, anxiety driven fall… so get ready…

Excitement about the S&P finally piercing its all-time highs remained front and center… In fact – many of the business channels were on ‘S&P Record Watch’… as we waited… it teased all day… pushing and backing off and then it happened – at 3:20-ish… The S&P pierced 3386 – traded as high as 3387.89 before falling back to end the day at 3380. Treasury yields pushed higher – a sign that investors are feeling a bit better and gold continued to thrash around – moving lower and then ending the day up $20 to $1949/oz while oil surged on an API (American Petroleum Institute) report of larger drawdowns in inventories… Continued frustration in DC acted as the sideshow – as it appears clear now that both sides are further apart today than they were on Friday…

All this says is that there remains optimism that so many of the issues plaguing the markets can and will be solved – Hard hit US states are showing signs of improvement and investors remain hopeful that US eco data remains resilient even as the virus rages on. Dallas Fed President Bobby Kaplan urging elected officials to make a deal… saying that:

“Adherence to protective behaviors and the extension of unemployment benefits is critical to growth.”

And Boston Fed President Eric Rosengren pushing for more stimulus saying that the recent jump in the CPI is not a concern… In fact – he said that:

“It is very premature to be concerned about a significant increase in inflation with 10% unemployment.”

So expect the FED to continue to provide plenty of stimulus. Sectors in the lead – Tech, healthcare, basic materials, energy, consumer discretionary and consumer staples I mean even Utilities rallied nicely which is a unusual… Utilities tend to be more of a defensive play – but hey – playing defense is good when you are unsure of what’s next. In the end, the markets appear to be pricing in a stimulus package even though the news out of DC suggests differently.

So now that the ticket is set… Expect the focus moving forward is going to be all about the election and what sectors will benefit and which ones will come under pressure…..Tech, healthcare, and energy will be front and center… and then talk of a democratic sweep will only fuel the angst… I suppose the best outcome would be a split congress – GOP Senate and a DEM House… but those odds are changing every day… and will continue to drive sentiment in the months ahead… the macro data will be important and talk of a vaccine will play a role for sure… but it will be the platforms put forth by both sides that will drive the action as portfolio managers adjust their holdings to reflect the risk… So get ready.

Overnight – the rally seems to be fading (again)… Asian and European markets are all under a bit of pressure – nothing dramatic – as the commentary remains the same. Virus, oil demand, geo-political issues, weakening macro data – but the markets also feel a bit tired and we have been saying that all along… so there is nothing new here at all.

Eco data this morning included Initial Jobless Claims – exp of 1.1 mil -trending down and that’s good and Cont Claims of 15.8 mil… also trending down… Tomorrow brings us Advanced Retail Sales – exp of +2.1% m/m, ex autos and gas of +1% m/m. Industrial Production of +3% and Capacity utilization of 70.3% – leaving plenty of room to increase capacity without increasing costs…..Typically  – we would be more concerned about Capacity Util when it approaches 85% or so as it suggests not only an expansion – which is good – but it also suggests underlying inflationary pressures building… but at 70.3% – we still have plenty of room – so maybe Eric is right.

US futures are basically flat. Dow down 25 pts, the S&P is off 6 pts, the Nasdaq is giving back 30 pts and the Russell is unchanged. Was yesterday’s surge nothing more than a ‘dead cat bounce’? We’ll see.

Oil is unchanged… at $42.29… Opposing reports causing confusion – the EIA (Energy Information Agency) reporting that inventories are falling – suggesting new demand (bullish) while OPEC comes out and says that they see demand to fall ‘more than expected.’  OPEC expects a fall of more than 9 mil barrels/day this year – up from a decline of 8.9 mil barrels/day… (that seems a bit ridiculous… no? 8.9 vs. 9?) They also said that they doubt next year’s recovery as well due to the virus.’ No worries… demand isn’t going anywhere – That being said we remain in the $35/$45 range.

This morning the S&P is at 3380… again just 6 pts away from the 2020 highs but the tone feels a bit tired… right now futures suggest a lower open… So – do I think it will happen today? I do not… I suspect it will fail again and then as we move into the end of August and volumes slow, we can expect more volatility… And remember – late summer/early fall is always an interesting time… and the election this year makes it more so… so don’t get complacent… My sense is the current range appears to be 3,280/3380… 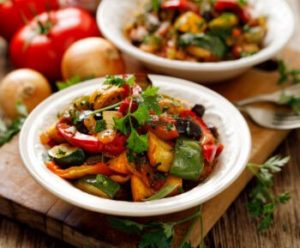 Ratatouille – (Rat – ta – too – ey)… comes from the French word – Touiller – meaning to “toss food”… because when you make this you – literally “toss” it all together… now this can be a side dish, or a main dish… you can serve it over Pasta or Rice – you can even use it as a stuffing in a pastry type filo dough. It is a great fall kind of “stewy” meal… thick and delicious yet not overpowering at all.

You can also slice the onions, peppers, chop the carrots and celery and cube the zucchini – set aside.

Begin by heating up the olive oil – about 1/2 c or so… now add the crushed garlic and sauté for a bit.

Next add the onions and sauté until translucent, now the peppers, carrots and celery – continue to cook on med heat… until they feel soft – about 15 mins or so… finally add the cubed zucchini and eggplant – mix well and season with s&p.  Cook for another 10 mins or so… now add a can of crushed “kitchen ready” tomatoes – NOT PUREE. (Depending on how much you are making you may need two cans of tomatoes). Now add fresh basil, a bit of oregano and cover – allow to simmer for about an hour – while stirring occasionally.

Feel free to taste in case you need to adjust the seasoning. At this point the Ratatouille is complete. You decide how to serve it – over pasta? – Make sure to have fresh grated Parmegiana cheese! Over white rice? As a main dish? As a side dish? You cannot go wrong!