So now the question is was it:

H.  All of the above

Stocks teased the S&P 2020 highs all day… starting the day by just barely kissing the all-time closing high of 3,386 as it struggled to get through 3,381… and while we did not ‘officially’ clear that February hurdle – for all intents and purposes – the market has demonstrated it can come back… and it did come back… I mean even the Dow Industrials is withing 0.5% away from its February high of 29,500. And we have been talking about this for a while now – amazed at how the markets and investors can’t get enough (and we can thank the FED and other central banks around the world for most of it) … even as the country and the world continues to deal with the aftershock of a virus that brought the world to a standstill.

Now as indicated yesterday morning… futures were pointing up, Russia had announced ‘a cure’ or ‘a vaccine’ that has been approved (by the Russian FDA) to fight the virus – I mean even Vlad said that he had given it to one of his daughters to prove to the country and the world that he believed in it… (funny how that works – if he really believed in it – he would have taken it himself…) and then there was the ongoing drama in DC – with Trump talking about more tax cuts while the Dems continued to fight with Stevey (Mnuchin) and Chief of Staff Marky (Meadows)… now suggesting that the deadlock between the DNC and the GOP could go on for weeks – and that is not going to be fun. Markets around the world were on fire… European markets up more than 2% as the bell rang on Wall St… and it was off to the races…

All eyes on the S&P – as 3,386 was in investors sights... and we teased it all day… at 1:30 pm – it appeared as if we were there… but then it started to unravel… gold and silver (which were under pressure to begin with) came under more pressure… Eco data revealing that just maybe INFLATION is starting to wake up… PPI (Producer Price Index) came in at +0.6% when the expectation was for +0.3% and Ex food and energy of +0.5% vs. the expected +0.1%. which should have been more positive news for the precious metals proved to be just another data point that caused an unusual reaction… Gold crashed – falling $110 or 5%  ending the day at $1921/oz after it recent parabolic move higher… Silver also lost  5% falling $5 to end the day at $24.84.

Then Evercore’s Tech analyst Amit Daryanani told us that gov’t data for July shipments of iPhones showed a 35% DECLINE overall… noting that this “marks the third straight month of decline and is a significant deterioration vs. the mid-teens declines in May and June.” Now is this the reason for the 3% decline or was the decline a direct result of how overbought this stock was.  Look – Apple was up 25% in the last month, it is up 116% since the March selloff and is up 58% since January… so let’s just put it in perspective – a 3% decline is hardly anything to get worked up about… Apple is a core holding… period.

Talk of some of the highflyers having come under pressure fueling some of this angst as it appears that the switch from growth to value is underway… ZM now down 16% in 4 days… (never mind that it is up 317% since January), AMD down 11% but up 93% since January… WFH stocks also under pressure. TWLO down 2%, PLT down 1.3%, FB -2.6%, MSFT -2.3%, AMZN -2%, and all this makes sense if investors are preparing for a more defensive portfolio… So, like Gold or Silver – investors are taking the opportunity to raise cash in the outperformers which have proven to be very crowded trades with stretched valuations. Now understand if you were someone that just recently bought these stocks at the highs – then yes… you are a bit uncomfortable, but if you own these stocks for a while – there is nothing to get worked up about at all.

Look – the fiscal and monetary stimulus packages are critical to keeping momentum alive and the sense is that both sides will come to the table and come to a deal and if so – yesterday’s angst should be replaced with calm and suddenly this morning – the tone has changed from what it was yesterday afternoon. Futures are suggesting a rebound… Trump announcing that the US will purchase 100 million doses of Moderna’s ‘experimental’ vaccine ($1.35 bil) – which is in late stage human trials…(Moderna shares surging on the back of the news)… this in contrast to Russia’s ‘vaccine’ that is essentially still in a phase 1 trial with 100 participants. Joe Biden brings Kamala Harris to the ticket so expect lots of ‘rah rah’. The nation will see them together in Delaware around noon. Socially distanced of course, but together as they greet the nation in hopes of being able to win the election in November and move into the WH in January.

Eco data today includes – CPI (Consumer Price Index) and estimates call for +0.3%, ex food and energy of +0.2% … and now this will be widely watched… especially after yesterday’s stronger than expected PPI report. CPI speaks directly to the consumer… it speaks to prices paid at the register… It is a more direct reflection of inflationary expectations… and any sense that this report is stronger than the expectation – then it will naturally flow to talk of ‘adjustments to FED policy’… but let’s not go there just yet.

US futures are UP… in what feels a little bit like a ‘dead cat bounce’ after yesterday’s late day reversal. What has changed? Ok – Trump announces that vaccine purchase order, he continues to talk about tax cuts, Biden to meet Kamala out in public at noon, CPI data due out at 8:30, Shake Shack opened its first store in Beijing and Chinese nationals have announced that they would choose WeChat over Apple… apparently you can’t live in China without WeChat… it does everything and then some… and it reports every move back to the communist party – in what has become the biggest surveillance state in the world. At 7 am – we see Dow futures up 266 pts, the S&P up 26 pts, the Nasdaq up 103 pts and the Russell up 24 pts making up what we lost yesterday and then some.

The media had and will continue to have a field day with Kamala – already telling US voters that she is NOT a Bernie/Lizzy Socialist, that she is not a fanatical left wing party member – but is very willing to discuss breaking up some of the big tech names… so let’s see how this plays out. Today’s WSJ runs with an opinion piece that claims – Kamala Harris Won’t Satisfy Progressives! – Make sure to take a look.

Oil is up 1.6% at $42.29… after being lower yesterday… the API reported that US crude inventories fell by  4 millions barrels last week – this vs. the expected fall of 2.9 mil barrels suggesting that demand is alive and well… and while DC is still in a stalemate it is not doing much to kill this story today… but I imagine that could change tomorrow. That being said we remain in the $35/$45 range.

And the S&P came within 5 pts of piercing the closing high… before it failed… this morning the S&P is 53 pts away from that target… So – do I think it will happen today – I do not… I suspect it will fail again somewhere in the 3350’s as we move into the end of August and volumes slow… And remember – we are coming into a volatile time… late summer/early fall… so don’t get complacent… My sense is the current range appears to be 3,280/3380…

Gold is attempting to find some stability after yesterday’s beating… currently – gold has traded between $1874/$1956… and is currently at $1940/oz as investors try to sort it all out. Today’s CPI report could be telling… any sense of rising prices could help gold find a bid and begin to move higher… expect more volatility in the days ahead after yesterday’s collapse – I suspect we will be in the $1900/$1950 range for now. 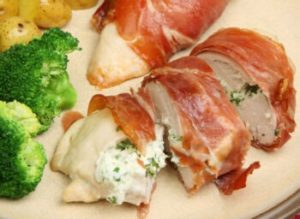 Stuffed chicken is so versatile – as you can stuff it and roll it with anything you like and it always comes out great. Today, try this one…

Sauté your fresh spinach in a bit of garlic and olive oil – seasoned lightly with s&p.

Lay the cutlets out flat on wax paper and lightly season with salt and pepper. Next divide the spinach amongst the eight cutlets, careful not to overstuff – leaving a little space along the sides. Now sprinkle a tblspn of the cheese on top of the spinach on each of the cutlets.

Starting at one end, tightly roll the cutlets – now wrap the pancetta around the chicken pinch it tight a toothpick. If it is a big cutlet you may need two pieces of Pancetta. (You can also choose to use cooking string to tie it up – but the toothpicks are easier).

Now – In a large, heavy bottom skillet, add some olive oil over med high heat and add the sliced garlic. Sauté for about 3 mins – now add the chicken and brown on all sides, about 5 – 8 minutes.

Next – Add equal parts of chicken broth and wine and bring to a boil.  (Usually a cup of each will do for 8 cutlets).

Reduce the heat to a simmer, partly cover the skillet and cook for 15 minutes.

Now remove the chicken and bring the remaining wine mixture to a boil.

Season with s&p – now add dollop of butter and maybe a tsp of flour and allow to thicken just a bit. (if it is not thickening – you can always add a bit more butter and flour). When thickened – add the chicken back to the sauce and coat well. To serve – Place the chicken on a platter and pour the sauce on top. Make sure to have a mixed green salad to accompany. If you want – you can add a side of garlic and herb flavored rice. No need for a veggie – it’s in the cutlet.