FOMU is the new FOMO!/Try the Cavatappi w/Green Pea Pesto

Economic data yesterday was just the latest headline to drive markets higher – yet again – as the MOMO guys (momentum) keeps the excitement going… While mortgage apps fell a bit, you can expect it to rebound in the near future as new home sales the other day – rocketed higher (+14% vs. the exp of +1.8) as people relocate and depart the cities – they need bigger, houses that offer offices, gyms, room to grow (think NEW construction) as the virus, low rates, remote working and schooling and an improving economy continue to fuel that advance. So stocks got an added boost when the gov’t reported that Durable Goods exploded higher… 11.2% vs. the expected 4.8%… Capital Goods ordered and Capital Goods shipped also improved at +1.9% and +2.4% – ahead of the expected +1.7% and + 1.8%.   By the end of the day – the Dow added 83 pts, the S&P gained 35 pts, the Nasdaq added 199 pts and the Russell – in an act of defiance – lost 11 pts…

So here is how you connect the dots –

The economic definition of a durable good is a good that ‘does not quickly wear out and yields utility over time’ vs. being consumed in one use. It also has a life expectancy of a minimum of 3 yrs. Examples: cars, washing machines, dryers, stoves, refrigerators, dishwashers, toilets, doors, windows, flooring, roof shingles, bricks, concrete, plumbing, wiring, etc… get the pic? (sounds like a house to me?)

By contrast a Non-Durable good is clearly something that you might use once or twice and then it’s done and you usually replace it… Examples: Laundry detergent, dishwasher detergent, shampoo, toothpaste, tooth brush, toilet paper, food, milk, bread… (things you might find in a house…)

Capital Goods Ordered (GCO) and Capital Goods Shipped (CGS) reflect a different part of the economic life cycle – CGO – are tangible assets that businesses use to produce consumer goods/services that have been ordered (Think future supply). Example – machinery, airplanes, trucks, supplies, etc… So an increase in this number then suggests that businesses are spending money on future supply – thus they must be positive on the economic outlook… (bullish).

CGS reflects the actual shipments of these products to the end user and are also used by the gov’t to calculate equipment spending in the GDP report… so an increase in this report reflects positively on GDP. (bullish)

Then we had the news that the bio-tech company – Moderna (MRNA) is making progress on a vaccine that is showing promising results for the 55+ demographic… sending that stock up 6.4% bringing its total 2020 rise to +260%… leaving the XBI (Bio-Tech ETF) up 17% ytd… (and 71% off the March lows).

In addition, investors reacting to the latest news out of Salesforce or (CRM) – one of the newest Dow stocks (as of 8/31). The company reported ‘record sales’ of $5.5 billion and expects to top that number in the current qtr, in addition CEO Marc Benioff announced that he is laying off 1000 people as he is ‘reallocating resources to position the company for continued growth’. In addition – recall that on Tuesday – Dow Jones announced a facelift for the index and CRM will now be a Dow member on Monday – along with Amgen and Raytheon. Asset managers that mimic the Dow’s performance have been now been recalibrating… BUYING the newest members – and SELLING the retiring ones. So investors found a reason to celebrate taking CRM up $56 or 26% in one day… and this sent the whole tech complex higher… leaving the Nasdaq index a good 10% above its short term trendline… which usually signals a pullback to trend… (at some point) – but the truth is fairly simple…

Investors/traders and algos are betting on the fact that volatility has subsided over the summer, macro data keeps improving and the FED along with the ECB (European Central Bank), BoE (Bank of England), BoJ (Bank of Japan), BoC (Bank of Canada) even the PBoC (Peoples Bank of China) and a host of others will not forsake the markets and keep taking steps (low rates) that give so many no other alternative but to buy stocks. In fact today’s appearance by Papa Jay Powell – FED Chair – at the Jackson Hole Summit is only expected to re-iterate this stance on monetary policy for the foreseeable future… (January 2022 at least).

Toby Levkovich – Senior US Equity Strategist at Citigroup called it the new FOMU trade… (Fear of Meaningfully Underperforming) targeted at asset managers vs. its cousin – the FOMO trade (Fear of Missing Out) that is usually ascribed to the retail investor.

Guys (generic) that run money in a ‘tech fund’ must use Nasdaq as the benchmark – and they will be swiftly punished if their fund’s performance is not at or better than the Nasdaq’s performance and the Nasdaq right now is up a whopping 30% ytd… So anything less than +25% is considered a ‘loser’… Actually, this year I am sure that they will be considered a loser if they underperform even by 1%!  It’s a tough crowd…

This morning US futures are taking a break… following in the footsteps of the other global markets… Dow futures are down 102 pts, the S&P’s off by 8 pts, the Nasdaq lower by 25 pts and the Russell off by 2 pts. The focus today will be on the Jerome Powell speech… Will he surprise the markets or not? There will also be talk of the RNC convention and the Trump speech this evening… there will be talk of infections and vaccines and there will be talk of the improving US economy… There is also sure to be discussion of Hurricane Laura that has now made landfall slamming into the Louisiana coast as a category 4 storm with 150 mph winds…

Expect the rest of the week to be quiet and most likely next week as well as Labor Day is not until Monday Sept 7th… But do expect that once the RNC is over the fight will begin in earnest… debates between Trump/Biden and Pence/Harris will be the focus in the fall season… as both sides make their case as why they should be re-elected or elected.

This morning the S&P is at 3478 only 22 pts away from the next century mark – 3500.  Again we are in new unchartered territory… trendlines will help  to determine levels of resistance – if there are any at all… valuations are stretched… if you are invested in the market – I wouldn’t necessarily go chasing names here – September/October are volatile months… sit tight, do your homework and be patient. 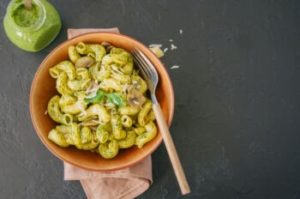 The pesto sauce originated in Genoa which is in the Liguria region of Northern Italy. Liguria borders France, Piedmonte, Emiglia-Romagna and Tuscany… and sits right on the coast of the Ligurian Sea. The hills lying immediately beyond the coast coupled with the sea account for a mild climate year-round. Average winter temperatures are 45 to 50 °F and summer temperatures are 73 to 75 °F. This makes it a very temperate place year-round and as such remains quite popular.

Portofino lies on the coast just up from the capital of Genoa and is a destination for some of Europe’s rich and famous.  Today’s recipe makes use of the mortar and pestle – The verb Pestare means to pound or crush – Pesto is the past participle of this verb. The reference to pounding is because of the way they used to make it in a mortar and pestle – this is a tool that is used to crush/grind certain ingredients/herbs etc… Now you can use the mortar and pestle or you can use the food processor – your choice… and as you now know Pesto is usually made with garlic, basil, pine nuts, parmegiana cheese and olive oil… (in other recipes – I substitute – basil for Arugula, Asparagus, or Broccoli and make pesto out of those ingredients) so today we are going to use Peas.

For this you will need: Frozen peas, Parmegiana cheese, 2 garlic cloves, splash of lemon juice, a bit of chopped basil, pepper (the cheese is salty enough) and olive oil.

First bring a small saucepan of water to a boil and add the peas…cook until the water re-boils +1 min. Now strain… Blend all of the ingredients – taste – adjust if necessary, then set aside.

Now bring a pot of salted water to a rolling boil and add the linguine (you can use any type of pasta you want – but I like linguine with this meal) – cook for 8 / 10 mins or until aldente… strain – reserving a mugful of the pasta water. Put back in pot and add back 1/4 cup of water to remoisten…stir… no puddle in the pan… capisce? Now add the pea pesto and toss. Serve immediately in warmed bowls. Always have extra grated cheese on the table for your guests. Again – this is a simple meal and easy to prepare. Enjoy it for what it is – comfort food…