What Would Charlie Say?/Try the Porcini Rub

News that the Dow Industrials are about to go thru a major change caused that index to come under pressure while the others managed once again to push higher… By the end of the day – the Dow lost 60 pts while the S&P, Nasdaq and Russell gained 12, 86, and 3 pts respectively. It was an inconsequential day – as we move through the final week of summer – as the S&P and Nasdaq continue to make new records – Investors cheering the latest news about the virus, about the drop in infections, about a new round of trade talks between the US and China suggesting that both sides are committed to executing phase 1 of the trade deal reached last December – just before the corona virus swept up the world…

As a subplot investors are considering what is next as the RNC (Republican National Convention) launched their virtual affair causing investors to listen intently to what we can expect on the horizon if Trump is re-elected… this follows last week’s performance by the DNC (Democratic National Convention) when investors listened intently to the Biden camp as they presented their vision for the country in 2021 and beyond… It’s all very intriguing… And so it goes… in less than 70 days most Americans will take to the polls – to cast their vote – some have already cast their vote by mail… and hopefully by the early morning hours of November 4th, 2020 – we will know what that decision is and we – as Americans – will come together for the sake of a wounded nation to begin the process of healing…

Back to the markets – What would Charlie say?

By now you know – Pfizer, XOM and RTN are coming out of the Dow, while Salesforce, Amgen and Honeywell are going in – and in addition to the excitement it created it is also a sign of the times as the Dow industrials takes on a new look and a new dynamic… What would Charles Dow say today about the makeup of an index he created over a century ago? What would run through his mind when he sees names like Apple, Salesforce, Amgen, Intel and Cisco – companies that now define the American economy – would he be able to wrap his head around cell phones, bio-technologies, computer chips, enterprise software, and internet protocol-based networking?

I mean these names are so different than the 12 original Dow names that represented the American economy in 1896 – American Cotton Oil, American Sugar, General Electric, Laclede Gas, National Lead, North American Tennessee Coal & Iron, US Leather & US Rubber. It wasn’t until 1928 – just prior to the Great Depression – that the Dow underwent another transformative change that added 18 more companies – including what was to become XOM (the longest running Dow stock in its history) to the most famous index in the world. In any event – as discussed yesterday – asset managers who funds mimic the Dow now need to re-arrange the deck chairs – selling out of PFE, XOM and RTN as they add the new names that will reflect the new Dow on August 31st.

So it was no surprise to see the Dow come under pressure while the rest of the market pushed higher as investors celebrated the declining tensions between the US and China… in fact – most investors would agree that the latest push by the two countries is a welcomed news story in light of all of the negatives headlines that have been hitting us every day… because in the end – it is not in anyone’s interest to either launch or get stuck in a new trade war… but remember – while that is good news, we have seen that it can all change on a dime – so while we welcome it – do not start re-arranging your deck chairs just yet. Stick to your plan – create a well-diversified, slightly defensive portfolio for the months ahead… as it is sure to be rocky road this fall.

Between concerns about a ‘twindemic’ both the flu and the coronavirus, the Presidential election and the non-sense that social media will add to the mix, the rebounding US / Global economy, a suitable/effective vaccine and the re-opening of businesses across the nation – we have plenty on our plate to consider – and the last thing you want to do is make an emotional decision… especially during a week that marks the end of summer when so many portfolio managers, analysts, strategists are not at their desks – resulting in what some think are exaggerated moves… moves that can create opportunities to re-allocate some assets based on performance not on emotion. (think stretched valuations in ‘some’ of the go-go names… Capisce?)

We are all aware that the swift recovery in the markets is a direct result of massive FED and gov’t stimulus programs launched as the pandemic caused devastation across the country… and beginning tomorrow – we will hear more about those moves and the moves of other global central bankers at the Jackson Hole Economic summit that is not taking place in Jackson Hole at all, but rather on a Zoom meeting connecting the global participants together. Investors around the world will be listening to what Jay Powell (Fed Chair), Christine Legarde (Pres of ECB), Andrew Bailey (BoE Governor), David Malpass (World Bank President) and others have to say about the state of affairs for monetary policy in the decade ahead… What new clues will they offer investors as they seek to lay out a plan for the future? Not so fast – I wouldn’t be making any investment decisions based on what we hear anyone say on Thursday or Friday – but it will be interesting to get a sense of what this brain trust thinks about the future of monetary policy – remember – what we do know already is that the US Fed is prepared to let inflation rear its ugly head before they react – putting themselves in a ‘reactive position’ vs a ‘proactive position’ – a move that makes me uncomfortable… but that’s what therapists are for!

We learned for sure that American Airlines is about to let go of 19k workers when those protections offered by the federal aid offered to all of those airlines expires in September – as the airline industry as a whole braces itself for a new round of layoffs – think DAL, LUV, UAL etc. TEVA pharmaceuticals is charged with ‘fixing prices’ on some of their medications and MCD’s is now uncovering new and titillating information about what former CEO Easterbrook really covered up while mortgage lenders are now asking all new applicants to tell them if they intend on seeking forbearance on new loans…

The RNC featured nearly every member of the Trump family singing Donny’s praises while a Maine lobsterman, a dairy farmer from Wisconsin, frontline healthcare workers and small business owners made up the chorus. And in another first on live TV – Donny pardons a convicted criminal that has changed his life and turned his world around – sending Anderson Cooper, Jake Tapper, Dana Bash, Chris Cuomo and Don Lemon into a frenzy… in any event – it just politics… let’s remember that. No reason to get all worked up… What’s gonna change?

European markets are all a bit higher – investors there happy about the fact that the US and China are starting to talk again… there was no eco data out of the Eurozone and with so many participants on vacation the overall tone and mood of the markets is subdued. Europeans are also waiting on any news out of the Jackson Hole Economic summit – but also do not expect to hear anything that will be earth shattering. As of 6 am – the FTSE -0.07%, CAC 40 + 0.25%, DAX + 0.54%, EUROSTOXX +0.37%, SPAIN +0.08% and ITALY +0.19%

Eco data today includes Mortgage apps – Durable Goods and Cap Goods Orders and Shipped. – None of this will be a market mover. Tomorrow brings us 2Q final GDP and expectations call for a -32.5% number… again – all expected and not expected to be a market mover at all.

Expect the rest of the week to be quiet and most likely next week as well as Labor Day is not until Monday Sept 7th… But do expect that once the RNC is over the fight will begin in earnest… debates between Trump/Biden and Pence/Harris will be the focus in the fall season… as both sides make their case as why they should be re-elected or elected.

Gold is flat at $1924/oz. Worries over trade tensions have now subsided and global growth appears to be on the mend… all keeping gold in check. Gold bugs are also waiting to see what happens on the Zoom summit tomorrow and what Jay Powell may or may not say… Low rates and further stimulus should be a positive for gold – so don’t worry – because low rates and more stimulus are here to stay for a while longer. It now appears that we are in the $1900/$1950 range until we get more clarity on policy and politics.

Oil was all over the place overnight and is currently flat at $43.35/barrel! Now did you notice that price?  $43.35… up and thru resistance at $43.25… a level that I have been telling you about for weeks now… recall that I discussed how the convergence of the short and long term trendlines were about to cause oil to break down or break out? I have been calling for a break out for weeks now and overnight it happened… many suggesting that the price rise is due to the shutdown of rigs in the gulf as we prepare for Hurricane Laura to hit the coast – I still say that while that may add some upward pressure – the fact is that the improving global and US economies will cause demand to surge and thus prices to rise… not explode higher but just break out of this tight range we have been in. We have now successfully closed the gap created back in March which leads me to think that we could see oil challenge the $50 level in the months ahead.

This morning the S&P is at 3443 – well into new unchartered territory… trendlines will help to determine levels of resistance… but right now there is none in sight… and with word that the US and China are now talking and global macro data is improving and virus infections appear to be subsiding the path ahead looks bright… but remember – valuations are stretched… if you are invested in the market – I wouldn’t necessarily go chasing names here – September/October are volatile months… sit tight, do your homework and be patient. 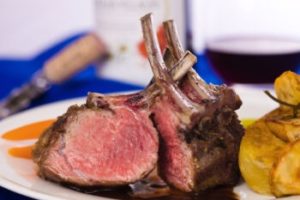 Porcini Rub:   Grind 1 oz of dried mushrooms until fine…you can use a mortar and pestle or a food processor.

Next combine the mushroom powder with 2 tblspns of sugar, 1 tblspn of s&P, 4 garlic cloves and about 1/4 cup of olive oil. Set aside. You can make a container of this rub up to this point and store in the fridge in a sealed jar. When you get ready to use it – take it out of the fridge and let it come to room temp. Mix and then massage it into your meat of choice. I would use this on a rib-eye or on lollipop lambchops…

For the Lollipop Lamb chops – massage the chops with the porcini rub – both sides – place on broiler pan and let rest for 20 mins or so.

Turn the broiler on high – and place the chops under the broiler.  If you choose – you can also do these on the grill but beware – they will cook fast – so stay tuned.

You want them to be juicy yet a bit crusty… Once they are done – arrange on a bed of arugula salad – seasoned with s&p, fresh lemon juice, a splash of oil – drizzle some nice balsamic vinegar over the top and serve.

Tagliata (tal-li-ata) is just the way you serve it. Sliced and fanned out on the plate topped with the arugula salad and shaved parmegiana cheese.