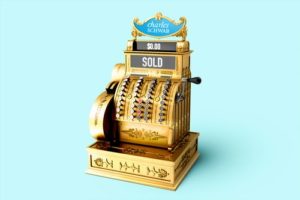 It’s a 3 day ‘selloff’! Trillions of dollars lost in just the 5 FAANG stocks – News that Softbank is the secret “Nasdaq Whale” that had bought billions of dollars in Tech options in the past month… that forced those same names higher and is now coming undone… Next – it’s a TESLA Gamma Squeeze that we’re talking about… which is BS… (Gamma being the 3rd letter of the Greek Alphabet – but also being the ‘rate of change in an options delta per every 1 point move in the stock price’ Now the Delta is the 4th letter of the Greek alphabet but it is also the ratio that compares ‘the change in the price of the stock (in this case TESLA) to the corresponding change in the price of the options… (all very complicated) – but this is what we’re talking about and this is driving the most recent sentiment – both on the way up and now on the way down… and it’s ugly – or at least it feels ugly… By the end of the day – the Dow gave up 632 pts or 2.2%, the S&P lost 95 pts or 2.8%, the Nasdaq plunged by 465 pts or 4.1% and the Russell falls 30 pts or 2%.  In the past week – the Dow has lost 5%, the S&P is down 7%, the Nasdaq is off 11% and the Russell is down 4%.

TESLA lost $88 or 22% – YESTERDAY and is now down 34% since last Wednesday, Apple lost $8 or 6.1%, Facebook gave up $11 or 4.1%, AMZN lost $144 or 4.4%, GOOG lost 58 pts or 3.7%, NFLX lost $9 or 1.8%… and this is sending shivers thru the tech sector and the broader market… And then toss in margin calls and boommmmm… more selling pressure. Suddenly all of the exciting moves up turn sour… as this whole Gamma Squeeze thing comes apart at the seams… and Softbank gets slammed again… and so – just like nearly every selloff – People and algos’ sell what they can vs. what they should’ – the algos all run for the door at the same time to try and ‘hit the next bid’… just like they ‘take the next offer’ when the Gamma trade gets initiated causing markets to move higher…

So let’s just say it for what it is… If you are a long term investor – this is not anything to get sour about… because these stocks are still up BIG on the year… but if you are a day trader – that got long some of these names in the last couple of weeks – then yeah… you’re not happy… but then again – you need to understand the risks… and the markets are not so simple and the technology and strategies that exist today only complicate the markets more. This is not your grandfathers stock market…

Expect the media to feature all of the men/women who have been calling BS for a month now to light the place on fire again… saying ‘I told you so’ – myself included – because we have been saying that valuations are stretched… the market is well ahead of itself etc. Whatever! Anyone that is in the market and is savvy enough to understand the risks should not be deterred with this latest temper tantrum… but that does not mean is that you pile in right now… after a move like that – you need to let the market settle down a bit… and with everything that is going on outside of Wall Street – the election, the vaccine, the chaos in the streets, the cultural revolution, the failed AstraZeneca trial, the lack of movement in DC between the GOP and the DEMS, the increasing tensions between the US/China etc. – it makes more sense to sit back and be patient. For the long term investor – time is on your side… for the short term trader – you need to stop the bleed and that might mean that there is more pressure to come.

And nothing was spared yesterday… every sector was RED… some more than others… but in that is opportunity… This morning US futures are UP… in what is most likely a ‘Dead Cat Bounce’ off of the recent sell off… Dow futures are up 190 pts, the S&P is up 37 pts, the Nasdaq is ahead by 209 pts and the Russell is up 13 pts.

In Asia – Chinese inflation data revealed that the PPI (Producer Price Index) fall by 2% – no surprise… this as the CPI (Consumer Price Index) rose by 2.4% – again in line – but those markets ended the day lower – as the meltdown here permeated the markets there.

European stocks are all a bit higher – not by much, but they too are trying to find some stability… as reports suggest that investors there are shrugging off the latest tech meltdown… Now that’s interesting because yesterday – it was ALL about the tech meltdown… and today – no one cares? Come on!

The AstraZeneca news caused that stock to fall another 1% after yesterday’s post close move lower when the news hit the tape that they are putting the 3rd phase trial on hold… and this is causing some angst in the other names… REGN, MRNA, PFE, JNJ, MRK etc. Is this an AstraZeneca issue or is it a broader issue? I say it’s an AZN issue… the other companies have not halted testing.

Eco data today includes: nothing… but tomorrow we will get PPI, Initial Jobless Claims, Continuing Claims and Wholesale Inventories.

OIL! OK – so the meltdown continues as suddenly all the talk of a global re-opening turns off as covid 19 cases rebound and this is causing any hope for a steady recovery to stall… which I think is BS too. Because what has really changed? The Corona story is NOT that different than it was… and all the reasons that they took oil up and thru $44/barrel are suddenly no good anymore… Come on! In any event – oil is now down 9% from the highs and is now sitting on intermediate support at a level it should hold… but the markets are antsy right now… so sit tight…

Gold is down $12 at $1920/oz on the back of a stronger dollar… but the decline could have been worse but for the growing fears of a stalling economic recovery due to surging virus cases around the world. It has now broken short term trendline support at $1923 as traders now look for $1900 to be the next stop.

Oil – continues to decline… a move that started last week the commodity had to make a decision as the trendlines converged… which way would it go? Would it break out or break down? My guess was that it was ready to break out – clearly I was wrong… it broke down… as the chatter all last week and into the weekend was about the rise in expected covid cases after the long weekend and what that would do to demand – you can add in the stronger dollar as well – that puts pressure on the price of oil… so they whacked it… leaving it sitting just on its intermediate term trendline… at $37.60… it needs to find support here. Let’s see what the Saudi’s do next…

This morning the S&P is now at 3331… not yet testing even its short term trendline at 3305 – which is another 1% from here… What is interesting is what happens if we test that limit… Do we hold or not? Well that will depend on the tone and the rhetoric… because right now the market is full of angst… and the moves will be defined by emotion vs. fundamentals. Remember – this move is not that suspicious… We are well within the normal trading band… valuations were stretched and some may still be stretched for some sectors and we are seeing money being raised from many of the Go-Go growth names… and moved into some value names. If you are invested in the market – Bravo – sit tight, talk to your advisor if you get worried… I would offer a word of caution as we move into the fall – I wouldn’t necessarily go chasing names here – September/October are volatile months… sit tight, do your homework and be patient. 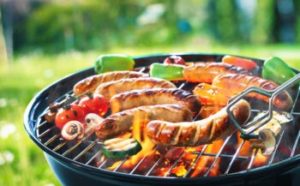 Preheat oven to 375 degrees – Preheat grill for cooking the sausages.

Season chicken pieces with s&p – heat up oil in frying pan – when hot – reduce heat to med/hi – now add chicken and brown on all sides – maybe 10 mins total. Now remove and place in a baking dish and put in the oven and continue to cook for about 30 mins…

Next – cook the sausage on the grill – careful not to burn… maybe like 10 mins total… remove from grill and let rest for 3 or 4 mins then cut into bite size pieces.

In the meantime – add the chopped garlic to frying pan (that still has the juices and oil from chicken) along with sliced vinegar peppers – sauté. Now add the sausage, a bit of butter and some white wine and reduce (5 mins) – next add chicken broth and the artichoke hearts… sauté for another 5 – 8 mins…

Re-introduce the chicken to the frying pan and allow to simmer for 2 or 3 more mins.

Now serve on a large warmed platter family style.  Accompany with a large mixed salad and a green vegetable – maybe some sautéed broccolini.