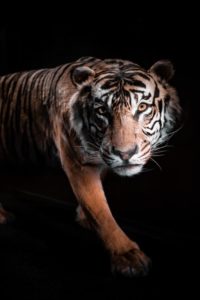 Stocks ripped higher in what may prove to be nothing more than a ‘dead cat bounce’… completely forgetting why they ripped lower for the past week – giving up more than 10% in the Nasdaq and 4% and 7% for the Dow and S&P, respectively. The mood was buoyant in the pre-mkt trading… you could feel the excitement as investors/traders and algos all got ready to go on a shopping spree – apparently overnight – the computers realized that the ‘sale’ going on on Wall St – may be just a bit overdone… no matter what. Whether it is a ‘Gamma short squeeze’ gone bad, or the revelation of the Nasdaq Whale (otherwise known as Mayoshi Son of SoftBank Fame), a failed trial of a Covid19 vaccine, or a stronger dollar or falling demand for oil and gold more BS from both sides of the aisle or building tensions between Donny and Xi Xi… blah, blah, blah… no matter what the issues were for 4 days… suddenly they aren’t important any longer – or at least they weren’t important yesterday –

As the day dawned… Stocks surged right out of the gate – the names that led the ‘tech wreck’ lower were the same ones that led the surge higher… you know them… the usual suspects… FB, AMZN, AAPL, NFLX, GOOG and MSFT and while TSLA also surged – it means nothing to the S&P500 because it’s NOT a member of that index… recall that Lonnie and his electric company were rejected by the top brass at S&P last Friday… So, while it’s all very exciting to watch TESLA surge/collapse and surge again – it adds no value to the moves in the S&P. As the closing bell rang at 3:59:45 – (at the close the bell rings for 15 seconds – thus the start at 3:59:45) – The Dow added 439 pts or 1.6%, the S&P tacked on 67 pts or 2%, the Nasdaq shot higher by 290 pts or 2.7% and the Russell added 22 pts or 1.4%.

All the chatter about – This Was It – suddenly went ‘POOF’. The damage done to the Tech sector left many ‘newbies’ (think Davey Portnoy and his band of Merry Men from Robinhood otherwise known as ‘day traders’) bleeding heavily – while the seasoned long term investors/traders managed to stay in their lane… not hitting the ‘panic’ button – allowing the mania to settle in and not making emotional decisions… although someone should check the algo’s because it seems to me that they are the ones being emotional lately… because look – what are we really talking about. Ok – the Nasdaq lost 11% in 4 days (so what? – it’s still up 21% ytd)… and individual names lost more – again so what? They are still up substantially ytd… and if you like the name AND the story hasn’t fundamentally changed then you got the chance to buy more at a DISCOUNT… Bingo! (Clearly – IF the story has changed, IF the fundamentals are not what they were when you bought it – then YES – SELL the stock – but is that what really happened here?)

Again – here is where I use my Bloomies analogy… You have clothes in your closet – right? They all fit – right? So when Bloomies has a 30% or 40% off sale – Ask yourself this: Why do you go in and buy more??? How come you don’t’ sell the ones you have? Capisce?

I mean – Look – TESLA lost 34% in one week but it is still up 400% ytd… so what am I missing? Unless you were the day trader that paid the top tick on Tuesday – which was $502.49 post-split (the pre-split equivalent of $2512.45)– what are you worried about? If you own this thing in the 1’s or the 2’s, is there really a reason to panic? Even if you own it in the low 3’s – you are not getting banged (yet)… you might be worth a little less (today) but sit tight…if the story is as good as you think it is – stay put… Buy ‘protection’ for your portfolio… Now – if you are not an investor but rather a trader… that makes his/her money by buying and selling stocks all day… then that’s a different story… altogether… but if you are an investor – let me be the first person to tell you – sit tight… if you have a plan and you have an advisor – who has a clue – then there is no reason to panic… but I suppose TSLA is not the right example for so many people… so pick something more mainstream…

Here’s a thought – all of those Robinhood ‘traders’ that wet their pants when the bottom falls out are NOT the ones that you want to listen to… just sayin’.

Look – as we have been talking about – we are now in the fall – a typically volatile time for the markets… for a number of reasons… and this year with all of the chaos created by the pandemic coupled with the upcoming election, loss of jobs, nasty rhetoric back and forth, upcoming earnings season again in early October and the ongoing release of the macro data points  etc… we can expect more volatility in the days ahead… so pick your spots – do your homework and identify both buy and sell opportunities that will keep you on track and keep your portfolio in balance.

Across the sectors – Tech was the BEST performer yesterday – gaining 3.4% – Basic Materials and Homebuilders taking the 2nd and 3rd position at +2.5% and 2.4% respectively. Consumer Discretionary was up 1.9% – which is interesting because these are ‘discretionary names’ not ‘necessary names’, Healthcare +1.7%, Retailers +1.7%, Industrials +1.5%, Consumer Staples +1.4% followed by Utilities at +1.3%…

This morning – US futures are pointing lower… again – should not be surprising after yesterday’s boom-er-rang… Early morning action suggested the markets remain confused… Currently futures suggest that the Dow would fall by 105 pts, the S&P down by 9 pts, the Nasdaq higher by 13 pts and the Russell off by 5 pts. Look – the swift correction that we saw earlier in the week has managed to wake everyone up to the stretched valuations… and while some of the speculation has been shaken from the trees – do not expect this to be over just yet… an 11% re-pricing is good – but there are still lots of questions… and concerns on the horizon…

Aside from the usual concerns – the market must now begin to consider this: What happens IF the election is too close to call on the November 3rd? How long will it take to count and verify the mail-in ballots? And then we can fully expect both sides to challenge any result – causing even more angst and anger in the nation and then in the markets… but look – let’s not get ahead of ourselves just yet… We have 3 Presidential debates in the 6 weeks ahead and 1 VP debate… so maybe it becomes a bit clearer and then maybe the results on November 3rd will be well outside the ‘margin of error’… and the country can move on… no matter who ends up sleeping at 1600 Pennsylvania Avenue.

Expect the election headlines to drive the action in the weeks ahead more than usual… then add in – Vaccine news, Earnings, more global macro data, trade tensions and central bank actions – and not just the FED – consider the ECB (European Central Bank), BoE (Bank of England), BoJ (Bank of Japan), PBoC (People’s Bank of China), RSA (Reserve Bank of Australia) on top of commentary from the World Bank and the IMF (Int’l Monetary Fund).

European stocks are all a bit lower this morning as investors there await the latest news from the ECB.  Now while no one expects Christin Lagarde (ECB Pres) to announce any major policy changes – they will listen intently to what she has to say about the strengthening Euro. Is this becoming an issue for the Eurozone? And if so, what is she thinking? The latest economic releases suggest that the recovery across the continent is still highly uncertain – although so far, the worst predictions have not come true…

Additionally – investors have to consider the latest shift in the BREXIT talks. Fears are rising that talks are stalling and may in fact fall apart… (not good) and this will surely keep investors on the edge of their seats… My sense is that this is all a game of chicken… and that in the end – just like the US & China did – they will find a path to some sort of resolution… the question is what does that look like?  In early trading – the FTSE is -0.58%, CAC 40 -0.19%, DAX +0.23%, EUROSTOXX flat, SPAIN -0.22% and ITALY +0.24%.

Eco data today includes: PPI – exp of +0.2%, Initial Jobless Claims of 850k – this is significant as it remains below the 1 million mark and Continuing Claims of 12.9 million jobs and Wholesale Inventories are expected to show a decline of 0.1%.

OIL remains under pressure – currently trading at $37.50… think stronger dollar, supposed declining demand and yesterday’s API report (American Petroleum Institute) that showed a ‘build of 3 million barrels’ vs the expected draw down of 1.4 million barrels… and this is ‘stoking concerns’ about that sluggish recovery as the pandemic raises its ugly head again. Today we will get a report from the EIA (Energy Information Admin) and if that also shows a rise in inventories – then expect all of the analysts to ring the alarm bells (again). OPEC+ is set to meet next week – September 17th and we can expect this rise in inventories and fall in demand will be front and center… if they surmise that demand is really falling – then we can also expect them to cut back on production in order to support prices here… I believe that we will remain in the $37/$45 range.

Gold is unchanged at $1957/oz… after having tested trendline support at $1929 an oz earlier in the week.

This morning the S&P is now at 3398… bouncing yesterday after having tested short term trendline support at 3312 on Tuesday… Look – all 3 indexes – the S&P, Nasdaq and the Dow all tested trendline support on Tuesday and held… but don’t get so complacent just yet… my sense is that we will test it again and then again… usually its 3 times before we can bet that it holds… We are in the 3312/3400 range… I also expect that while investors are not deterred – the trader types will be in line trying to sell some of their purchases from yesterday – as they skim pennies off the top… If the buyers walk away for now – watch how panicky the sellers get… the algo’s will see a void in demand and go into ‘panic sell mode’ again causing yet another re-pricing that shakes the branches again.

Remember – this move is not that suspicious… We are well within the normal trading band… valuations were stretched and some may still be stretched and those will be re-priced as well… Again, I offer a word of caution as we move into the fall – I wouldn’t necessarily go chasing names here – September/October are volatile months… sit tight, do your homework and be patient.

It’s all very exciting for sure – and in the chaos is opportunity… this is not the time to fall asleep… so – Wake up, Stock up, and Eat up! 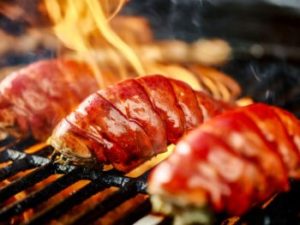 You have to prepare the lobster for marinating – so to do so you will need to break the claws off the body and crack them open.  Then slit the underside of the body. Mix all of the ingredients together to make a nice marinade… put the lobster in a large bowl and pour the marinade and let sit in the fridge for at least 4 hrs.

Light the grill… let it get nice and hot