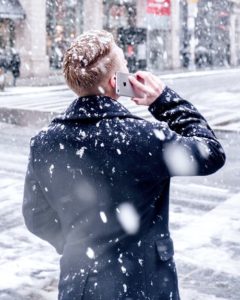 Remember the TECH Wreck two weeks ago that caused the broader market to go into panic mode? Remember how the pundits told us it was all over? The media leading with the burning question: Is this the end?

Don’t be ridiculous…While the Nasdaq is still about 6.5% below its early September high – it is still up 25% ytd and the angst and concern of two weeks ago is nothing but a distant memory… The index and many of the most popular tech names that got clobbered – mostly all traded down to their trendlines… only to find support… while others did pierce – those were company specific (usually is) issues that added to the angst… Look – the pattern looks the same… a swift selloff, stability and then the slow grind higher… as ‘big tech’ continues to steal the show…

And today’s IPO of SNOWFLAKE (SNOW) is only fueling even more excitement… investments by Berkshire Hathaway and Salesforce’s Marc Benioff only adding to the mania… Snowflake provides a turnkey, cloud based database solution for companies… it helps companies pull insights and build out applications from the massive amounts of data generated by the business. It takes the massive pool of data and then reorganizes it to make it searchable and useful in a whole range of ways… Are you understanding this? DATA! It’s all about the data that WE provide… We as consumers, customers, clients – again I say – spend an hour and watch ‘The Social Dilemma’ on Netflix… It is an eye opener as the story is told by former employees at most of the big tech companies today… I mean – nothing we can do about it now… that boat has left the dock… but – it is a must-see documentary… (not a movie).

Now the IPO was initially supposed to be priced in the $70 range but with all this excitement – talk of $120/sh is now the norm… but remember – that is the IPO Pricing – it is not the opening trade price… With all of the attention focused on this IPO – we can expect that the opening price will be far different than the IPO price… It will trade on NYSE under the ticker symbol SNOW.

And this IPO is only adding to the recent tech excitement centered around that wave of multi-billion mergers on Monday – all tech or bio-tech related and the deals were significant underscoring the role that these giant firms play in the equity markets… and that created its own excitement – as it should – and then yesterday we got all the hype around Apple and their virtual ‘Time Flies’ presentation… all about new iWatches and new iPads… nothing about iPhones – but it was all very exciting… as Timmy cuts the times between the iWatch and the iPhone – producing a whole set of NEW groupies for Apple… By severing the tie between the watch and the phone – he can create a new set of customers that only need the watch to connect into the Apple ecosystem… and then out to the world. (Prior to this announcement – you needed to have an iPhone to connect your iWatch so that it could work – NOW you don’t… capisce?) It is another example of Apple Marketing Genius… pull the client into the ecosystem and then you got ‘em… they never let go… which is why I continue to say – why would you ever sell your Apple stock? You just need to buy it and forget it…

The extent of the latest tech rally is also helping to bring stability back to the broader market… a look at both the Dow and S&P charts reveals the same pattern… stocks got clobbered – the indexes traded right down to the trendline – found support and are now once again attempting to move higher… and the notes put out by some of the big investment banks in the past couple of days is certainly helping… Our friends at Goldy – leading the charge… with Davey Kostin reiterating his view that we could see S&P 3600 by year end 2020 and 3800 by mid 2021… others then falling line to join the party… Much of the renewed excitement centered on the successful release of a vaccine to combat covid19, continued low rates and an improving economy… by the end of the day – the Dow added 3 pts, the S&P was up 17 pts, the Nasdaq gained 133 pts and the Russell ended up 2 pts.

Now while the focus on the successful release of a vaccine is exciting in the longer-term… there remains the issues that could cause more disruption in the short term… earnings and the election… as usual – earnings are in the process of being ‘refined’ just weeks ahead of their official release – the expectation was for 3Q earnings to be down 30% earlier in the year – but have now been revised to be lower by 22% – with GS estimating lower by 20%… This after 2Q earnings handily beat the very LOW bar set by the street (80+% of companies BEAT the lowered estimates) after the pandemic hit… leaving so many to assume that the 3Q would continue to show improvement… (and I expect that we will see better than 80% of companies reporting to once again BEAT their estimates…) but much of the market action of late is already reflecting this refinement… so once again we ask – What will forward guidance look like? Profit margins anyone? What will companies say about ESG (Environmental, Social Governance), What will they say about the new diversity initiatives that they have all implemented in the last 3 months – because investors will want to know what big multinationals companies are doing to level the playing field. Companies that are slow off the mark are sure to be punished, while companies that can demonstrate quality and realistic initiatives are sure to be rewarded.

And then there is always the election and with less than 50 days to go – the tone is heating up… Tuesday, September 29th is the first presidential debate between Joey and Donny, followed by Thursday, October 15th and then Thursday, October 22nd… For anyone who is still on the fence – these debates will be a chance to see our candidates live and in action… and so while they won’t price stocks in the long term – they can and will have a short term impact… and most likely that impact will cause stocks to once again come under pressure… and if we have ‘no winner’ on November 3rd – then watch for more volatility as both sides battle for control of the WH & Congress… in the following weeks.

Look – things are improving, we are making headway with therapeutics, interest rates are low and will remain low for a while – estimates now call for low rates into 2023! And this WILL fuel further advances as many street analysts will make the case for advancing valuations based on these low rates and the improving economy… but if we get a Democratic sweep (I say 40% chance) then this could all change in a heartbeat… If we get a fractured gov’t – Biden WH – but split congress – then we’ll get gridlock and the market is usually ok with that… and if we continue with the current arrangement Trump WH – split congress – the market will be ok with that as well.  Stay tuned… the excitement is building…

This morning US futures are up fairly big – considering that we are waiting for the release of the FOMC (Federal Open Market Committee) report… due out at 2 pm today… Like we said – No one expects any change in rates at all, but investors will be waiting for comments concerning the current state of thought about the economy, the dot plot chart – which allows each member to forecast where they think rates are going… and any other insight that might leave a clue concerning a change in leadership… (wink wink). Now remember – the FED doesn’t want to or like to be political… and so he will leave any political commentary to your imagination… Dow futures are up 100 pts, S&P is ahead by 15 pts, the Nasdaq is adding 50 pts and the Russell is up 7 pt.

Overnight in Asia – Japan elects Yoshihida Suga as their new PM and reveals that exports in August fell by 14.8% vs. the 16.1% expectation… and investors focused on Apple suppliers after yesterday’s Apple event… stocks ended mixed… Japan +0.09%, Hong Kong -0.03%, China -0.66% and the ASX +1%

European stocks are up small… as investors await the FED data and the ECB announcement tomorrow. EU President Ursula von der Leyen giving her state of the union speech promising to build a new partnership with the US no matter who gets elected in November. She added that the chances are fading away for any deal with the EU and the UK upon their BREXIT as UK’s Bojo plans to violate int’l law by reneging on parts of the withdrawal agreement. The FTSE is -0.14%, CAC 40 +0.13%, DAX +0.04%, EUROSTOXX +0.08%, SPAIN +0.43% and ITALY -0.08%.

Oil is up again trading at $39.15/barrel as Hurricane Sally slams the coast… causing a shutdown of oil and gas production… and after the API (American Petroleum Inst) reported that oil inventories fell by 9.5 mill barrels last week. This in contrast to the expected 1.3-million-barrel increase… Tomorrow we will get news from OPEC and what they plan to do to support oil prices… Capisce? Oil is now once again on the north side of trendline resistance and appears headed for $40/ barrel.

This morning the S&P is now once again above 3400! It closed at 3401 last night and looks to go higher on the opening bell… We are kind of in this void… as the market looks to want to go higher – and that swift selloff two weeks ago could see a swift recovery into the end of the week. I still think the market is capped in the 3400/3425 range for now… Just feels that way in my gut… so let’s see.

Clearly any movement in DC will be a positive and certainly any new news on a vaccine or the state of the virus will also send stocks higher… I would remain cautious… not be chasing names here – remember, You are invested, you will participate in any move up… but as usual patience is a virtue and now is a time to be virtuous! 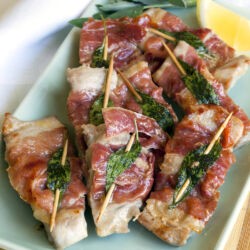 Love this dish… easy to make and always a winner.

Begin by placing a slice of prosciutto on each veal slice, and then place a sage leaf on top of that.  Thread a toothpick through the three layers, holding the sage and prosciutto onto the veal.

Heat butter, and the oil in a heavy frying pan until hot.   Add the veal in a single layer, prosciutto side down.  Sauté until the prosciutto is slightly crisp and brown, around two minutes. Turn, and cook on the other side for an additional minute. Remove from the pan and keep warm and covered.

Whisk in 2 tblspn of butter, and then return the saltimbocca to the pan to re-warm. Remove the toothpicks and the sage and transfer to a serving plate, prosciutto side up. Pour the pan juices over the meat and serve immediately.