Stocks Live to Fight Another Day – Try the Pasta Fagioli

The stock market continues to fight on… and it will live to fight another day… and while last week now marks the 4th down week for the indexes – I’m not sure why anyone is really surprised… the issues that have been bubbling up continue to bubble up and in fact – are now beginning to boil – and the best part is that they are NOT fundamental economic issues at all, they are all ‘geo-political’ issues that are driving sentiment and action… and that is important to consider when you looking for opportunity. While Friday saw all of the indexes close substantially higher – the week was mixed… The Dow gained 358 pts or 1.3% for the day. but lost 483 pts or 1.7% for the week, the S&P rose 52 pts or 1.6% on Friday but lost 0.6% for the week, The Nasdaq rose 241 pts or 2.2% on Friday and GAINED 1.1% for the week…

We are seeing the virus raise its ugly head (again) – the UK going into partial shutdown mode, concerns rising in Spain, France and other parts of Europe – while in the US – the same thing appears to be building… States, cities, colleges, universities, and local schools attempting to re-open and with that comes some renewed risk… (we are already seeing pushback from local schools across the country as teachers refuse to teach in the classroom) and that is causing a range of new virus/safety concerns at home. Toss in the countdown to the Presidential election, the countdown to a vaccine and now the countdown to the next Supreme Court confirmation, after Trump officially nominated Judge Amy Coney Barrett to replace the late RBG, the ongoing trade tensions with China, the new restrictions on doing business with SMIC – China’s biggest chipmaker and now more TikTok drama – as a judge ordered a halt to the ban imposed by Trump on TikTok downloads. There is both fiscal and monetary risk as well – as DC can’t seem to come together and launch another stimulus plan… and the FED is caught between a rock and a hard place – how much more can the FED do? Go negative? Buy stocks? Cancel debt? It is no wonder that investors/traders and algo’s remain confused… but in that confusion is always opportunity…

Look, there are now 4 S&P sectors that are trading below all 3 trendline supports – the 50, 100 and 200 DMA (Day Moving Averages) Utilities (XLU), Financials (XLF), Energy (XLE) and Real Estate (XLRE). There is 1 sector trading below 2 trendlines – 50 & 100 and that’s Healthcare (XLV) and the rest are teasing just the 50 DMA – Industrials (XLI), Tech (XLK), Consumer Discretionary (XLY), Consumer Staples (XLP), Communications (XLC) and Basic Materials (XLB). So you ask – is there a rotation going on? Sure looks like it… but in that rotation is there opportunity? Sure looks like it… and here is where you need to do your homework – or call you financial advisor to help you navigate the waters.

The last couple of weeks in the market have been nothing short of ‘interesting’. Increased volatility causing traders and algo’s to go into a ‘panic’ state of mind… notice I did not include investors… and that was by design… because by their very definition – they are not short term players, they are not trading for sub-pennies, they eliminate the noise – or at least they try to thus they don’t react the same way. And while this volatility exists and will continue to exist through December (as indicated by VIX futures) there are things to consider here as the bears win this latest round of back and forth.

Tuesday all brings us the 1st Presidential debate – hosted by Chris Wallace – featuring Joey Biden and Donny Trump – the 6 topics that have been agreed upon include:

– The records of both Biden and Trump

– The Supreme Court – and this takes on new significance upon the death of Notorious RBGCovid 19 – What we did, and could have done

– Race and violence in our cities

– The integrity of the election

It will be ‘must see tv’ on Tuesday evening as Americans tune in to what will most likely be one of the defining moments in this election cycle. How will Joey do? How will Trump do? History shows that the opponent always does better in the first round – will that be true this time around? But no worries – There will be two more debates in early and mid-October to round it out. The VP debate takes place on Wednesday October 7th… and while that one is usually less attended – there is lots of talk of a Harris Presidency (sooner than you think) – so the stakes are high as well… I suspect that that debate will also be well attended.

And that leaves the question – is the market disconnected from reality?

That is a common question and one that I am asked often when conducting webcasts, appearing on podcasts or while appearing on CNBC. Look – while the S&P is up 2.7% ytd – the FAANG+M stocks are up 29% while the rest of the S&P is down 3.4%. So, you ask – is the market disconnected from the real economy? I think the answer is a resounding YES – the market does appear to be disconnected (at the moment) from the rest of the economy – but remember – the market also has a way of correcting those mistakes and that is what we may be seeing right now.

This morning we see US futures up sharply… Dow futures are up 350 pts, S&P’s are up 43 pts, the Nasdaq is up 186 pts and the Russell is up 24 pts… in my opinion – it is more of a technical move vs. a fundamental move. Look – after the weekend – of surging cases around the world, a Supreme Court nominee that has 50% of the country in an uproar, a NYTimes front page article on Trumps taxes (yawn – who really cares… his accountants/lawyers took complete advantage of the tax code – isn’t that what they are supposed to do?) more trade tensions with China, blah, blah, blah… as noted above – there is a rotation going on and the moves this morning suggest some real bargain hunting taking place in the sectors that have made the biggest and most dramatic moves lower… long term investors finding ‘value’ and the opportunity to buy stocks that have been unduly punished while the trader types and the algo’s will have a party in the chaos…

Asian markets ended the day higher and European markets are trading up as well… China’s economic recovery supposedly gaining steam (if you believe anything that comes out of that country). Ongoing fiscal stimulus and increasing export data boosting sentiment and that is causing European investors to go into Buy mode. Over the weekend the BoE (Bank of England) policymaker Silvana Tenreyro revealed the possibility of real negative rates can produce ‘encouraging results’ (whatever that means…) In any event – European markets are all up better than 2%.

The S&P ended the day at 3298… and this morning’s pre-mkt action suggests that the S&P will open up 43 pts taking us right to trendline resistance at 3350. And this is a level that I think will prove to be a headwind… at least until Wednesday morning after the debate… The market action on Wednesday will tell you what investors think… a negative day will bode well for Biden while a surge will speak to Trump.

Any breach of either of these trendlines will trigger a round of ‘sell’ or ‘buy’ instructions from the algo’s that operate on key technical breaks… and that will force the next conversation – but remember –  it is Quarter End Window Dressing time… so do not be surprised… Remember – the options market tells us to expect more volatility thru November/early December… In any event – remember what I say – patience is a virtue – I have been telling you to sit back, do not chase and remain focused… 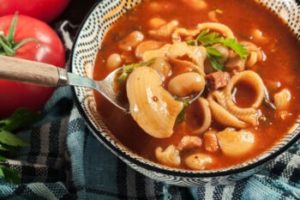 This is a great dish – simple to make and always a favorite. Pasta Faggioli is essentially Pasta & Beans. Anything else is just an addition to the basic dish. Today’s version includes Sweet Italian Sausage & pancetta.

Begin by sautéing some crushed garlic in olive oil on med heat – careful not to burn the garlic – Now add in the sausage meat (taken out of casing) and a bit of Pancetta – not too much just enough to give it some flavor. Remove and set aside.

Next add the diced onion, carrots and celery – sauté some more – maybe 15 mins.  Now add back the sausage meat.

Next – in the same pot add 2 cans of Cannelloni beans – do not strain.  Add chicken broth and 2 cans of water – season with s&p – bring to a boil and then turn heat to simmer.  Stir occasionally.

Now – boil the pasta for like 6 mins…it will be undercooked. Then strain and add the pasta directly to the bean and sausage mix. If you need to – add a mug or two of the pasta water to keep it from sucking up all the sauce. It will only need about 3 more mins to cook… as it will continue to cook even when you turn off the heat… so be careful…Serve immediately in warmed bowls with plenty of fresh grated Parmigiana cheese.