The Debate was a Disaster – Try the ‘Old Fashioned’

Chaos in Cleveland – have you ever seen anything like it? Right before the election – I sent out a tweet – “What are the chances that we’ll actually get a debate that speaks to the vision for the country – and not the 3-ring circus I’m thinking it’s gonna be?”

While this blog is not a political blog at all… the market action will be driven by this election for the next 5 weeks… like it or not – fundamentals mean nothing at the moment… they are not important… which will then create opportunity for those of us that are paying attention to price action. The election tenor will become so vile that stocks will react in the short term – but as noted – this vileness will not price stocks in the long term – so pay attention…

By now you have formed your own opinion of what we saw last night and more importantly – what we didn’t see last night… No substantive talk of the issues at all… it was a wasted moment in our country’s history… and makes one wonder – Are these beneficial at all? In my opinion Trump supporters continue to be Trump supporters while Biden supporters continue to be Biden supporters… Eamon Javers described it as ‘an alpha male’ show – I laughed when I heard that… (Thanks Eamon…) Alpha Male? The dictionary defines the Alpha Male as the dominant animal in a particular group or a man tending to assume a dominant role in a social or professional setting. While I agree that they each tried to dominate – the idea that either one of them is an ‘Alpha Male’ is comical… For some reason – when I imagine what an Alpha Male is – It is NOT Donny or Joey by any stretch…

The clashes that began from the moment Chris Wallace introduced himself – continued throughout the 90 mins – at times leaving the viewers shocked, disappointed, disinterested and disgusted and more divided than ever – in what will be described as nothing more than a circus – I can’t remember one economic issue or one economic concern that was addressed. When Biden was asked about the elimination of the filibuster rule or the addition of 4 new justices to the court – he refused to answer it – which in itself speaks volumes and then some back and forth over healthcare… and then Biden tells the President of the US to “Shut up man”! And then when Donny was asked to disavow white supremacy – he danced around that issue as well… pulling a ‘Biden’ by not directly answering it and in fact saying ‘stand down and stand by’ – which means what exactly? In the final moments – Wallace asked one simple question – Would there be a peaceful transfer of power? Biden says absolutely – if I lose, I lose and if I win, I win, Trump on the other hand did not make the same pledge – vowing to carry on the fight to the Supreme Court if necessary, over mail in ballots. In the end – it was a complete disappointment on both sides… Period. I don’t think anyone disagrees and if you do – you must have been watching the Brady Bunch and not the debate.

In the end – in country that has 155 million people over the age of 40 – and I use 40 as the dividing line between when someone would be seriously considered as a contender vs. not and that is not a jab at anyone in their 30’s – it’s just a statement… I have to ask – This is what we have to choose from? This is the best that America has to offer? Oh boy – are we in trouble…

Ok – back to the markets…

Now yesterday – the markets ended the day lower – (no surprise) and this morning stocks are looking lower again (and again no surprise). The concerns of the day – the same as they have been for months… the virus, the resurgence, the Supreme Court, the election, the economy and the conversation around what we were to expect for the first debate… While – stocks did try to advance early on – the mood quickly faded as the hours ticked by. At noon – word that the market was lower because virus rates ticked up in NYC also made me laugh… I mean – think about that statement – the US stock market is selling off because infection rates ticked up 1% in NYC? Come on! It’s ridiculous… By the end of the day – the Dow lost 131 pts, the S&P gave up 16 pts, the Nasdaq lost 32 pts and the Russell gave back 5 pts.

Stocks struggled because of all the uncertainty that exists today and as noted it is end of quarter and end of month… and there is a lot of window dressing going on and that is also causing portfolio managers to shake it up a bit as they ‘dress up’ their funds for the final marking period at 4 pm tonight. Expect more ‘rebalancing’ today.

And the VIX? Yup – that spiked higher and is higher again this morning… recall what I said yesterday…

And it appears that this morning – investors are a bit more fearful… The VIX is up 49 cts as of 6:20 am but had spiked higher +3% overnight as concerns rise over what now looks like will be an ‘extended election’… and a contentious fight… something that the nation does not want to see nor should we have to see it… But something tells me that we will and if that happens – expect volatility to spike and prices to thrash around from one day to the next as the markets attempt to find stability.

With the closing bell about to ring on the end of the 3rd qtr. it is time once again for financial advisors to consider the evolving global macro data set and the pending outcome of the US election as they ready themselves to assess, re-assess and re-balance their clients equity portfolios for growth. And while the recovery remains uneven – there is light at the end of the tunnel and some of that ‘light’ may influence future portfolio choices.

Manufacturing is coming back – and in fact the latest Empire State Manufacturing index reached a 2-year high, the Philly Fed Manufacturing Index posted its 4th consecutive monthly gain and the most recent Richmond Fed Survey is now also at a 2 year high. This data suggests that not only is manufacturing returning – it is accelerating. (That’s Bullish)

Retail sales have improved and with consumer spending up nearly 40% – the nation has more than recouped the damage it suffered at the height of the pandemic in March/April and appears ready to challenge the January pre-covid highs. (That’s Bullish too!)

Copper prices – the canary in the coal mine are also on the rise… suggesting demand for industrial metals – and that is also bullish.

And Mergers and Acquisitions? Yup – those are on the rise as well… and what this tells you is that CEO’s are choosing to put their cash ‘to work’ vs. shoving it under the mattress and saving it for a rainy day which they would do if they remained concerned about the future. But what this means is that they are more confident about the overall state of the union and that they see opportunity on the road ahead.

But for now – in the end – the election remains the wildcard… and the usual issues like healthcare, jobs and taxes will dominate the conversation. But this time around the supreme court and the elimination of the filibuster rule take on new meaning… and any changes to these constitutional beliefs will do nothing but create continued chaos for generations to come. Welcome to the circus.

This morning US futures are down… Dow futures are -132, S&P’s are down 16, the Nasdaq -66 and the Russell is -8… and this makes sense… after what we saw last night… Even news that Regeneron’s covid19 drug is successful in reducing viral levels, thus reducing symptoms of non-hospitalized covid patients is doing little to change the mood – But I think that is more because of the end of quarter dance (REGN is up 3% in the pre-mkt)… I suspect that once the 4th qtr begins tomorrow – investors will pay more attention to that headline… The sense is that we are in sideways trend for now… with the trend lower vs. higher. Asset managers that raised cash over the month are waiting it out… being patient… sitting on the sidelines unsure of the next move – they want to have cash available if the market retreats and if not – then they will be forced to put that money back to work… which will serve as a new source of demand.

The negative tone this morning suggests that Joey won last night’s debate and is raising the odds of a Biden win… causing investors/asset managers/traders and algo’s to hit the SELL button as a first reaction – as they consider what a Biden/Harris/Sanders/Warren administration will look like.

Oil is lower today – after getting beaten up yesterday… It’s the same story – weak recovery, lower demand, more supply, less travel, and a report that crude oil supplies fell but gasoline inventories rose… last night’s debate also not helping… just because… Oil broke thru support at $39.67 – trading at $39… further weakness could see it once again test the September lows of $37.50.

The S&P closed at 3335 – after once again testing resistance at 3355 yesterday… and failing – this morning is suggesting more weakness… talk of the debate will consume the day… concerns over a chaotic election are top of mind… as the fight rages on over mail in ballots. And so – I continue to believe that the markets will remain confined to a range of 3210/3355. Stay tuned… and talk to your advisor if you get anxious… a well-defined plan will do you good. 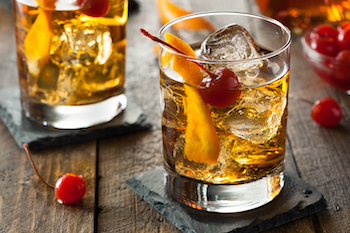 This is perfect considering what went on last night… two ‘old men’ – need I say any more?
It is a classic bourbon cocktail… invented in Louisville, KY.
For this you need: 2 tsp of simple syrup, 1 tsp water, bitters, ice cubes, 1 jigger of bourbon, 1 half slice of orange, and 1 cherry on top.
Begin by mixing the syrup, the bitters and water in a whiskey glass, now add the ice cubes. Pour in the bourbon and top with the orange slice and cherry…
Buon Appetito.