Oh boy… what a day… and what a turnaround from what futures had been pointing to yesterday morning in the pre-mkt… with what looked like a lower opening at 6 am – suddenly turned positive at 9:00 am… and it was off to the races… by 4 pm – the Dow added 329 pts, the S&P gained 28 pts, the Nasdaq rose 83 pts and the Russell added 3 pts.

So now you ask – Why? Well it was a couple of things… One ADP employment was stronger than expected – coming in at +749k job created vs. the 649k expected, then there was final revision to 2nd qtr GDP at -31.4% (but this is NOT the reason).

You see, he was one of the first featured guests on the annual well attended and keenly watched CNBC Delivering Alpha conference (and it was a another great event) – at 9 am he announced that he and House Speaker Nancy Pelosi were ‘doing lunch’ (that’s rhetorical) to discuss once again how they could come to a deal on a second stimulus package – going so far as to say that he is ‘hopeful’ about striking a deal and that he is prepared to make a ‘counterproposal’ to her $2.2 trillion bill… He also went onto say that they have found ‘common ground in several areas including the Paycheck Protection Program, small business loans, direct payments to Americans and more school funding… And THIS my friends is what changed the tone and the mood of the markets… futures went from negative to positive and then it was off to the races… And then at 10 am – Pending Home Sales showed a stunning increase at +8.8% m/m… and this bit of good news only caused the algos to ‘accentuate the positives.’

And this just brings up another story… Is anyone at the SEC combing thru their ‘investment accounts’ to see what the activity looks like… because it’s very curious… Don’t you think? They know damn well that any news of another stimulus package will cause the algo’s and traders to go ‘all in’ and while there has been rampant speculation back and forth about a deal vs. no deal… It is clear that when HE makes positive statements and appears closer to a deal than not – the market reacts to the upside… and so as the market sold off on Tuesday – the Dow lost about 140 pts both ahead of the debate which caused its own set of concerns but also because investors/traders and algos were concerned that there was no deal in sight…

And then we had the ‘chaos in Cleveland’ which sent futures lower Tuesday into Wednesday as global investors showed complete disgust with the circus (otherwise known as the debate) and the lack of any policy discussion, the sense is that Biden won the debate causing further downside pressure (because now we have consider Democratic tax policy) we had end of month and end of quarter rebalancing (window dressing) and we had NO stimulus deal in sight, Asian and European markets were lower and the tone was clearly risk off – essentially nothing positive to cause markets to rally… Or so we thought… And then he makes this announcement (surely it was not an ‘off the cuff’ thought) and that sends the algo’s into an instant frenzy – confirming that the market is aching for a resolution… So, I’m curious – Who went long the market in that group on Tuesday evening knowing that the announcement was coming on Wednesday morning? Stevey? Nancy? Chucky? Mitchy? And the list goes on… Because what they do know is that any progress on more stimulus will set the bodies in motion and algos will engage – sending BUY orders into the system… Capisce? And that is exactly what happened…

The debate about the debate raged and rages on… all kinds of polls now showing that Joey took the night – and as expected – the debate did nothing dramatic to change anyone’s vote… in fact if anything – Donny lost support which now makes us wonder – what does that do the GOP Senate races? Is the party going to get punished as well? That’s a fair question and one that needs to be considered as we move forward – because the policy implications of a Democratic sweep are BIG. Starwood Capital Group CEO Barry Sternlicht told the Delivering Alpha conference that:

“Maybe long term, two or three years out the Dem sweep would be OK, but in the short term, with the change in capital gains taxes, I think you’d see a pretty significant correction in the high-flying stocks in November or whenever they announce a winner”

Others at the conference took the other side of that trade saying that no matter who wins, it makes no difference because with rates at zero – money will flow into stocks…

The committee on Presidential debates is now considering making sweeping changes in the rules for the next couple of debates… Biden welcoming the changes while Donny says that ‘You can’t change the rules in mid-stream’… And just as a follow up – Donny did finally denounce and disavow the far right white supremacist group – but is that too little too late? Still waiting on Biden to denounce the far left Antifa group.

In any event – the renewed strength in the market appears to be alive and well – because the sense is that congress will come to a decision… and while they announced last night after the bell that no deal was made – the sense is that there is an 11th hour deal in the works… and that is important. More furloughs and layoffs continue to hit the tape daily, DIS, and now Shell Corp and of course the airline industry that is about to slash thousands of jobs and hundreds of routes tonight at midnight if NO deal is made… and this is a problem… So sit tight… I can’t imagine that DC is going to let this happen… because a move like this in the airline industry has huge implications for the broader economy and ongoing recovery. Look the gov’t did throw out a lifeline yesterday in the form of loans from the treasury… but everyone is still waiting on payroll support – which would be part of any stimulus program…

This morning – US futures are up… Dow futures are +204 pts, S&P’s are up 27 pts 16, the Nasdaq is +150 pts and the Russell is +18 pts. We are now in the final stretch of 2020 – and it couldn’t come fast enough… Trump has given permission for Stevey to consider some more compromise but anything above $2 trillion would be considered a ‘real problem’. So you see, now we are much closer – the GOP is somewhere below $2 and the DEM’s are just above $2… so what are we talking about? And by the way – last night the House delayed a vote on the package to give Nancy and Stevey a bit more time… (FYI the GOP proposal does have $20 Billion in it for the airlines) At this point does it really make a difference… the funny thing about it is that none of these jokers making these deals will be around when the bill comes due… I mean think about it… Pelosi is 80, Schumer is 70, Mitch is 78, Biden is 77, Trump is 71 – I mean the only one that might see the damage is Stevey – he is 57… the baby in the group.

Now if lawmakers fail to come to a deal – and the election goes into contention – and the recovery begins to falter – then you can be sure that this quarter will be volatile… and again that is what the VIX futures is telling you… expect increased volatility at least through December… Moderna says that they will not apply for an emergency use authorization until after the election… partly because they won’t have all of the data until about November 25th… so do not expect them to jump in the fray with a vaccine prior to the election… The others? Not so sure… In any event – stay tuned… and buckle up…

The S&P closed at 3363 blowing right thru resistance at 3355… which now means we are back on the northside of the trendline… and 3355 becomes support (again)… this morning futures are suggesting a move up… and if we get more talk of a plan… that will only cause more upward pressure… talk of the debate will continue to consume the day… as concerns over a chaotic election are top of mind… And so – I continue to believe that the markets will remain volatile… the next stop would be 3400-ish… but I still believe that it can all turn on a dime… Stay tuned… and talk to your advisor if you get anxious… a well-defined plan will do you good. 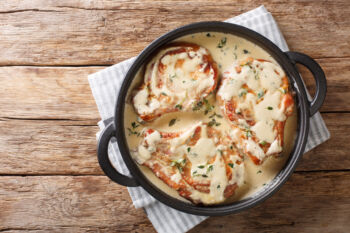 This is a great dish.

In a large sauté pan heat up the olive oil over med-hi heat. Season pork with s&p. Add to the hot oil and let cook for about 2 – 3 mins per side (depending on thickness) – you want them nice and golden brown. Remove pork from pan and set aside.

In the same pan add diced shallots and sauté… until soft. Now add mushrooms and sauté for another 5 mins… Add about 2 tsp of thyme and 1 tsp of tarragon. Stir. Next – here comes the Champagne – add and deglaze the pan for about 1 min…

In a sep bowl – whisk together 1 tblsp of flour to 1 cup of milk – add to pan. Put the pork back in the pan, cover and simmer for 3 – 5 minutes, until pork is fully cooked and the sauce thickens.

Present this dish on a bed of mashed potatoes topping the chop with the champagne, mushroom cream sauce. A large mixed salad is always welcome.