The issues remain the same… the virus, new therapeutics and possible EMA (Emergency Use Authorization) for cocktails of drugs by REGN and LLY. The ongoing stimulus negotiations which are on one day and off the next – currently the bid and offer look like this: The GOP and Treasury Secretary Stevey Mnuchin have come up to $1.8 trillion – while the Dems and House Speaker Nancy Pelosi are at $2.3 trillion – certainly narrowing from the original $1.6/$3.4 range and feeling closer than ever – YET – there is still no deal… just more talk. You see, the sense is that if Nancy continues to play her cards right and can stall any stimulus package from being settled upon prior to the election then she stands in a better position on November 4th.

Why? Because the polls are now suggesting a Biden win and a Democratic sweep, and this is causing stress for Trump but not causing stress for investors or the markets. Now, we all know how inaccurate polls can be – but when you start to get so many investment banks begin to discuss and lay out strategy for a coming Blue Wave – then you have to start to consider what that means. The street seems to think that a Biden sweep – while a short term negative is really a long term positive… and this symphony being led by none other than our friends at Goldman… (Watch where Jan Hatzius and/or David Kostin end up in a Biden administration…)

On the other side – we have Donny and the GOP – with Donny announcing that he is ‘covid free’, no longer a threat to the public, completely immune etc… (this has not officially been confirmed by any scientist or Dr – most are dancing around that specificity) – as he held a rally on the WH south lawn on Saturday featuring Candace Owen’s – BLEXIT supporters… (BLEXIT is the latest cultural movement – it is the Black Exit from the Democratic Party). Then we have the FED pushing the gov’t to do MORE suggesting that at this point – you might as well spend the money. And the sun sets…

OK – get ready to learn a new technical term – “The Breadth Thrust” – so you ask – What is this? It is defined as ‘a 10-day period in which advancing stocks outnumbered decliners by at least 2:1 – which suggests ‘massive underlying buying pressure’… and you guessed it… It happened last week and what makes it even more important this time around is the timing of this thrust… considering everything else going on.

We have been talking about these issues for months now… and rightly so – they have created periods of excitement and then periods of angst… causing markets to surge, fall then surge again… leaving everyone guessing… as all of these analysts/strategists talk of a ‘barbell portfolio (as if that’s a new idea… It is not) leaving investors confused, day traders happy and the algo’s energized.

You see – when the thrust occurs – the S&P is usually (96% of the time) higher by 13% – one year LATER. – that’s great! But what it does not tell you is that in the short-term there is usually a drop in prices. Now while this is not a big issue – it is important now because we are only 25 days away from the election… and as noted – a Biden win – is expected to cause a sell off – some estimates predict a greater than 10% correction… (but so was a Trump win 4 years ago – which did not happen) as investors re-price future policy initiatives. (think higher taxes across the board – which street analysts are suddenly no longer concerned about.) But just because there is ‘demand’ that does not mean that the buyers are defending any position at the moment… My sense is that, while there is money to invest – the buyers are gonna let this play out a bit – to see how anxious the sellers get… Why buy stocks down 3% when you might be able to buy them down 10% or more? Capisce?

It is the start of the third-quarter earnings season – with JPM to kick it off tomorrow… the week includes: C, BAC, MS, GS, WFC, JNJ, BLK, DAL, PNC, UNH, USB – to name just a few… expectations are running high… but remember – it’s all about the forward guidance – what will they have to say about a potential resurgence and what that may mean for business… My sense is that a lot of the excitement is already priced in… so tread lightly.

Next up – the Supreme Court Nominee ACB is due to appear in DC this morning at 9 am… as the process of affirming her nomination begins. She released her statement over the weekend – so no one should be surprised by her comments – the details will be in the questioning from both sides. Expect the Dems to try very hard to discredit her – but with a Republican majority in the Senate – it appears as if she is already affirmed (unless 3 or 4 more GOP senators come down with covid19 which will prevent them from being present on October 22nd – the expected vote date.)

Then we have the latest Apple event that begins tomorrow… this event – named ‘Hi Speed” is focused on the iPhone 12. Rumor has it that it will also feature other new products… AirTags – which are tiny Bluetooth tracking devices – used to find items like your keys, your wallet, your purse, your laptop – or nearly anything that requires ‘tracking’ (Do you see where this is going?) And in an even more invasive mode – if you lose something completely – you can put it in ‘lost mode’ – which then allows ANY OTHER iPhone user who comes across this lost item to see you, they will see all of your contact info and be able to send you a text or better yet – call you to let you know it has been found.

And then there is still the stimulus negotiations – which may appear to be on the back burner while all of this other stuff steals the headlines. Trump back on the campaign trail and now wants to reschedule the cancelled debate (because he is covid free) – no word yet on what the commission will do or what Biden will do. Today is Columbus Day – the banks and bond markets are closed – so do not expect a lot of action from stocks. There is also NO eco data to report today.

Asian markets ended the day higher as well… all of the action in Hong Kong and China – after the state media announced a new comprehensive reform plan for Shenzhen – giving local authorities a greater say in how business gets done – supposedly creating ‘market based economic reforms’.

Oil – is a bit weaker… falling as US Producers began to turn on the faucet again after Hurricane Delta was downgraded to a tropical storm after hitting the coast hard. Mike McCarthy oil analyst from CMC markets in Sydney saying that ‘Given that the hurricane season in the US has just started, there’s potential for that to keep prices firm.” Someone please tell Mikey that the hurricane season in the US began on June 1st and is almost over – Official end is November 30th… We have gone thru the American alphabet and are now naming storms using the Greek alphabet – thus ‘DELTA’. So either his quote is stale or he doesn’t understand the calendar. The pressure has caused oil to pierce support at $40.32 – with oil trading at $39.95 this morning.

The S&P closed at 3477 and feels like it wants to test the next century mark at 3500 and potentially the late August highs of 3580-ish. The algo’s may take us there over the next weeks – as they blindly push stocks higher… and this is the concern just because it feels a bit stretched. European cities and US cities are once again considering shutting down due to increases in the virus, and the election is still a wild card. Stimulus negotiations are not done, and my sense is that they won’t get done prior to the election – but it will get done at some point. I think the market has priced most of that in… so Caveat Emptor (Buyer Beware). 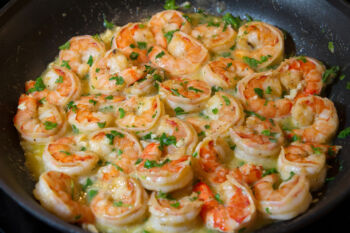 Fantasia’s was a local Italian restaurant located in Cambridge, MA – (around the corner from where I grew up in Belmont, MA) – that my family use to frequent quite often. It was one of those places that you could always count on – they knew you and they knew what you liked,

Clean and wash the shrimp, then dredge in flour. Set aside.

Make an egg wash by beating together the evaporated milk and the egg. Dip the flour coated shrimp in the egg wash, let the excess drip off, then dredge them once again in the flour.
Heat the butter in a large sauté pan over medium high heat. add the garlic and then the shrimp. Sauté the shrimp on both sides until golden brown.