Tech Does it Again – Try the Stuffed Cubanelles

Technology does it again… rallies in Apple, Amazon, Facebook, Twilio, Microsoft, Google… dragging the broader market higher… and this building upon the rallies we have seen in the prior 3 weeks… and the Apple and Amazon events today are only sure to further ignite the mood (more below). This latest surge higher happening even in the face of a handful of geo-political issues (all well-known) that have caused angst for investors for months now. And while the market has rallied hard off the March lows – we had that 7% pullback in June and then a rally into September that saw a 10% pullback in the broader market while we saw a 13% pullback in technology as investors tried to put it all in perspective – Well – it feels like they put in ‘perspective’. The Nasdaq is up 12% in 4 weeks, the S&P is up 10%, the Dow is up 8% and the Russell is up a whopping 15%. Individual sectors up even more… Value stocks (SPYV)– which have gotten a lot of hype lately are up 9% while Growth stocks (SPYG) continue to outperform just a bit up 11% in the past 4 weeks. WFH (Work From Home) stocks also enjoying the ride as they are up 15% in the past 4 weeks. And Transports – which have been on a steady march higher are up 38% since the June selloff (this is all part of the ‘recovery’ story) And all of this speaks to the declining levels of angst across the whole set of issues.

Issues surrounding covid19 appear to be under control – Yes, we are seeing a surge in cases around the world, we are seeing more and improved testing BUT we are also seeing a vast improvement in therapeutics. Investors are not reacting to this second surge in the same way they reacted to the initial invasion – Masks and social distancing are helping and citizens around the world have heard that message loud and clear. Cities and countries are re-opening even while there is some talk of ‘localized lockdowns’ in places where there are concentrated rates. Improving therapeutics have decreased the pace of death rates and the Biotechs have done a great job of attempting to create a vaccine… with more than 6 phase-3 trials happening right now… Moderna, JNJ, PFE, Novamax, Sinovac, Astrazeneca, and a host of phase 2 and phase 1 trials following closely behind investors are feeling like it’s not if but when.

And the election? Yeah – that’s becoming less of an issue as the polls suggest a clear and decisive Biden win… although it did that in 2016 as well – but this time I really do believe it’s different… The jury is still out on a Democratic sweep – but the ‘smart money’ (think GS) is carrying the Blue Flag telling us to prepare for a Democratically controlled executive branch – and while that is scary to consider – because the country will be dragged to the far left it is a real possibility… but as I said – there are still 21 days until November 3rd. This morning I heard on the radio – that 9 million mail in ballots have already been sent in (while millions more are being mailed out) and these 9 million ballots are well ahead of the number of ballots mailed in at the same point in 2016 – and what that tell us is that people are speaking out. People want their voices heard and are trying to make sure that the right to vote – is in fact ‘the right to vote’.

The supreme court nomination? Well that did get launched yesterday and if you watched it – you saw nothing more than both sides positioning themselves for why this should happen vs. why it shouldn’t. Today – will be more interesting as we get some Democratic senators to address ACB – the most visible one? You guessed it – Kamala… Can’t wait to see how she handles this. By the way – Do we call her just Kamala now? Like we do for Cher, Madonna or Beyonce? I mean does Kamala have that ‘star’ quality?

And today is the start of earnings season… and it’s comical really… I mean earnings are expected to better q/q – certainly they are expected to be down y/y – but who cares… as long as they ‘beat the number’ and as of this morning – there have been 30 companies to report (in the last week) – and guess what? 92% of them have so far ‘beaten the estimate’ (Surprise!) This morning alone we heard from Blackrock – and they ‘killed it’. Expectations of $7.78 are almost laughable – they reported earning so $9.22/sh (better on every metric) with Larry Fink telling us how great he is and how great Blackrock is. JPM also blew the roof off the house… expectations of $2.27 were met with earnings of $2.92/sh and they BEAT on both the top and bottom lines…

In the end – I suspect that we will get the usual 75% of reports beating on the top and bottom lines… but while that is all very exciting (market has priced that in already) it will be – as it always is – about the future, the next 3 – 6 months. So pay attention… for the banks – look for loan loss reserves, look for loan defaults and more importantly what they expect those defaults to look like going forward. Look for Net Interest Margin, and trading revenues in both fixed income and equities – in fact just listen to the tone of their voices and the words that they use. Jamie (Dimon) never disappoints and he didn’t disappoint again… Other names out today – JNJ – they BEAT on both top and bottom line! $2.20 vs. $1.98 and they are RAISING GUIDANCE – strong recovery story… (this will be the theme this quarter) C & FAST – due out any minute. The other issue to watch for is – What will these companies say about ESG initiatives?

And the big TECH event today – you guessed it – Apple…they are hosting their ‘Hi Speed’ 5G event! They are about to introduce 4 new iPhone 12 models… and while they call them Pro, Pro Max, Pro Max Supreme and Pro Max Super Supreme – I say they should be more creative… how about – Wingman, Commander, Lieutenant Colonel and Major General… isn’t that more interesting? I mean those tech guys can be so boring, no? Now what is interesting here is that the country is NOT 5G ready… so Apple is going to have a hard time telling people why they need to upgrade to an $1100 phone… when the technology can’t support it… So let’s see how they do… I suspect that they will do just fine… Apple junkies are Apple junkies… Oh and China? Yes – they are 5G ready… and China is a valuable market for Apple… Just sayin’

Amazon is having their ‘Prime day’ today – in what I believe is complete tone deafness by everyone in the retailing sector. A high percentage of the country is in despair, out of work with no prospects of getting back to work and Amazon is encouraging you to ‘Shop early’ ahead of the crowds and ahead of crunch time… I mean – Is it me? Am I missing something? There are 15 million Americans out of work and a host of others barely making it and the message from Amazon (and the retailers) is ‘Go out and shop’. Whatever!

US futures are mixed… Dow futures are off 174 pts, S&P off 3 pts and the Russell is down 9 pts… the Nasdaq on the other hand is UP 120 pts… Apple is quoted up $2, Amazon is quoted up $40, JPM up $1, BLK is quoted up $10. The story today will be all about earnings (just because we are all tired of everything else…) the Senate hearings will be a sub-plot, but as discussed, the GOP has the votes to confirm ACB – so it is what it is. And the media isn’t even talking about stimulus – as Stevey and Nancy can’t get it together… in what is clearly a Democratic play to stall any stimulus now in hopes of getting an even bigger stimulus package in January when Joey takes the oath of office (they hope).

European markets are all a bit lower. Oil markets are a bit higher – with WTI reading up 74 cts once again above the trendline as it struggles to push up and through.

The S&P closed at 3534 – busting up and thru the century mark with no problem. Leaving the late August highs of 3580 well within sight. And while today may see the indexes digest a bit – while the Nasdaq continues to surge – watch what happens to the stocks that report and beat – will they surge or will they back off? Have investors already priced in the good news? And if they have – why would you take the stock higher? And for those that miss on earnings… oh boy… Not pretty. 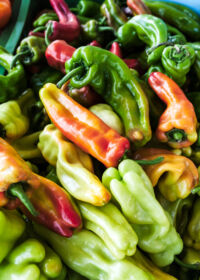 This is a great Thanksgiving vegetable side dish. Just one of many to come.

Now – using a teaspoon – carefully stuff the pepper – pushing the breadcrumbs deep into the pepper with your finger if you need to. Once stuffed – place in a baking dish – alternating ‘head to toe’.

Now cover with foil and place in the oven – bake for about 40 mins. Now remove the foil and let them brown a bit… if there is too much oil, just take a spoon and remove some it.

Let them brown for about another 10-15 mins or so. Remove and let stand while they cool. Now – if you overstuffed them – then expect to see some of the stuffing come out of the pepper – no problem – It’s all good. Serve alongside the other veggies at your Thanksgiving table.