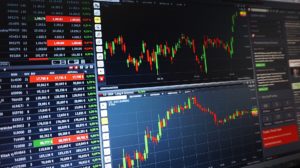 And so it was a mixed session on Wednesday…..as more of the banks walked the runway…..WFC falling 6% after reporting a 56% drop in profits and warning that ‘net interest income could get a little bit softer’ going forward. (Not one bank official defined ‘a little bit softer’ – the market made its own interpretation). In addition, after the bell – CBS and others report that WFC discovered and fired more than 100 employees for Covid19 relief fund fraud…. which leaves me to ask – What is going on at Wells Fargo? Who is in charge?

Meanwhile BAC fell 5% after not being able to keep up with JPM, C or GS in terms of trading revenues….and Goldy – well – you know what happened there! They reported earnings that were nearly DOUBLE what the street analysts had projected $9.68/sh vs. the $5.52/sh that was expected. (which is a bit curious – How could street bank analysts have missed that by such a wide margin? I mean – think about it…. they missed it by 75%!) And that surprise report caused that stock to hold its own…. closing up 0.28% which was a WIN considering that the group – XLF closed down 1%.
Now besides the bank earnings – which by all rights did consume much of the conversation – we still have Treasury Secretary Stevey Mnuchin trying to pin House Speaker Nancy Pelosi down. Going back and forth, talking, discussing, and then doing more talking….to no avial….at about 11:30 he announced that
‘getting an agreement before the election and executing on that would be difficult’.
And why? Because the democratic leadership has no appetite for any piecemeal deal….and the market is tiring of ‘we’re on, we’re off, maybe there is a deal, maybe not, We’re getting closer, now we’ve never been further apart…..’ and so the path of least resistance is down. (think lack of clarity…) Watch Mnuchin today on CNBC this morning….
And this just brings up – once again – what to expect from the election – Will it be contestable? ….While the market appeared to be expecting a Biden win last week, this week it’s not so sure…..and as the market weakens it becomes even more unsure………..talk of a Trump win once again making the rounds….…..Tonight – which was supposed to be the second debate between Donny and Joey, has now turned into 2 separate ‘Town Halls’ due to Trumps covid infection post the last event which caused all kinds of drama among the commission on presidential debates. So – each camp has decided to host their own event (doing nothing but creating more chaos) Trump will be live from Miami with Samantha Guthrie while Joey will be live from Philly with Georgey Stephanopolous. There will be lots of channel surfing as Americans flip between the two trying to determine the tone of each conversation. (In another twist – the NY Post releases another ‘alleged’ Ukrainian energy official/Biden meeting story at the center of the controversy surrounding Joey and his son Hunter – a story that was quickly denied by the Biden camp – but is just another reason for pause for some voters…..recalling the email controversy in 2016). In the end – the election will be the clearing event for the markets once we know who the President is…. because talk of a contested election is now once again the concern. No matter which side appears to win – if it is within a small margin then we can expect a fight from the other side – Period. If it is a decisive win on November 3rd then maybe not….
And the VIX does what?

Now this is exactly what we have been talking about – the increased volatility that is sure to be with us thru December…..VIX futures are still pricing in more volatility thru mid-December….and the VIX which was up 1.3% yesterday is now up another 6% this morning in the pre-mkt trading – bringing its total move higher to more than 20% in 4 days….… suggesting that its getting hot in the kitchen. And as the VIX moves up, stocks move down.
And this move mimics what is going on in the stocks around the world and in US futures this morning. Asian markets closed lower – Japan down 0.5%, Hong Kong lower by 2%, China off by 0.17%…. And at 6:30 am – we see that European markets are all down more than 2.5% across the board as they struggle with new covid 19 protections…..France declares a ‘state of emergency’ and ‘The City of Lights’ imposed a nighttime curfew while the UK is banning mixing families from different households indoors! What’s next for Spain, Italy and Germany?

In another story – France and the Netherlands have now joined the EU in backing a move to break up the TECH Giants……Capisce? (You do know who they are talking about – right?) FB quoted down $6, GOOG quoted down $30, AAPL is quoted down $3, AMZN is quoted down $85 pts….and the XLK – the broad S&P tech ETF is quoted down $3……And this is sure to keep the pressure on the US regulators as the Biden camp and their left supporters (Warren, Sanders et al) promise to break up Big Tech! But breaking up Big Tech does not mean that the broader tech sector is under siege – not at all – there are lots of places to play in tech……so look for the opportunity. The Internet of Things, Cyber Security, Software, FinTech, and the list goes on…. This just reminds us that it is NOT all about the FAANG names….
US futures are pointing to a lower opening – currently all down by about 1% and likely to approach 2% before the day is over. Dow futures are down 300 pts, S&P’s are off by 36 pts, the Nasdaq is off by 195 pts and the Russel is down by 12 pts…. You see, once the news takes on a negative tone – then everything takes on a negative tone….it becomes an ‘Accentuate the Negatives’ story causing the algo’s go hit the SELL button…..and here once again is the opportunity for the long term investor…. Now what that does NOT mean is jump in with both feet……What it DOES mean is be patient, get your list together, watch the action…because we all know that when it careens out of control it does so swiftly….and it just feels a bit shaky at the moment…..and in that turmoil is a silver lining.

Oil is which has been up this week and broke up and thru trendline resistance at $40.78 – trading as high as $41.29 before backing off a bit. Now recall – last week it pierced trendline support at $40.20 before rebounding. As discussed, – all 3 trendlines are now intersecting…. all between $40.47/ $40.97 – The API (American Petroleum Institute) reported a decline in gasoline inventories, crude stockpiles and heating oil for the week ended October 9th. Those stockpiles nearly double what analysts had expected and that is keeping a floor under oil prices. And we are seeing these declines while the virus is surging – which goes to my point – demand is alive and well….and winter is coming and homes need to be heated across 75% of the Northern Hemisphere around the world. Never mind the demand from industry and transportation. Now, we all know there is plenty of supply – so don’t expect oil prices to surge above $50 at the moment. $40/$50 seems to be a comfortable range.

Gold has fallen back to $1900/oz as the dollar has steadied and the realization that we are not getting a stimulus package for at least 2 months…. put pressure on this precious metal. Look – gold bugs want a stimulus package and when it appears as if it isn’t happening then they stamp their feet and hit the SELL button…..but once we do get a package (and if Biden wins – it will be a BIG package) then gold will surge….I suspect that it could trade down to trendline support at $1,885/oz but not much further. If the market continues to slide – that will provide a natural buying source for the metal. I believe we are in the $1885/1941 range.

The S&P closed at 3488 after trading in a range of 3527/3480…….this morning’s action suggests further consolidation as the weakness in Europe continues, the virus surges, the election gets more interesting, ACB prepares to get confirmed, earnings continue and the reality that we aren’t getting any stimulus anytime soon sinks in. The data today is expected to show a weakening US economy – which will only put downward pressure on stocks because we are not getting any further stimulus now. It would not be a surprise if we test support at 3395. 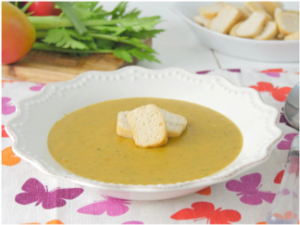 A vellutata is basically a cream sauce – a hearty delicious vegetable soup bathed in a cream sauce…. easy to make and delicious to eat…. Try it won’t you?

Meanwhile, in a small saucepan, whisk together flour and room temp butter. (maybe like 3 tbls flour to 1/2 stick of butter), Add ź cup milk and whisk to combine, then add 3 more cups of milk, 1 cup broth. Place on med heat and stir……bring it to a simmer then remove.

Add milk mixture to the vegetables, bring to a simmer and cook, stirring occasionally, until ingredients have blended…. taste adjust and Boom! It is ready……Serve the soup in warm bowls and top with a toasted round…. you can have grated cheese on the side if you wish….
Enjoy.