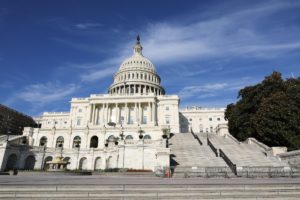 And so it begins… JPM, C, BLK and JNJ walked the plank… and what did we learn? Well, we learned that they all BEAT the estimates… Posting numbers that surprised even the analysts… why? Because they were all wrong! What did we learn? We learned that businesses and consumers held up well during this 8-month crisis that plunged us into a recession net seen for the ages… Bank results boosted by the fact that they didn’t put as much money aside to cover future loan losses – which left more for the bottom line… BUT before you go out and ring the bell – recognize that Jamie Dimon – JPM CEO – did tell us that he does see ‘significant losses in the future’… which is a bit confusing – right? They put aside less money for losses, but expect larger losses going forward… (Now understand that they already hold large reserves so it’s not like they are not prepared – but it’s just curious they put less money aside while acknowledging the future is tenuous). JPM has $34 billion in a ‘loan loss account’ which will be enough if the economy recovers but might be $20 billion short if the economy convulses again. He also went on to say that ‘without more public assistance for the economy it could grow worse’.

“A good well-designed stimulus package will simply increase the chance we get better outcomes, but there is so much uncertainty we’re not saying that that’s definitive.”

Apple’s “Hi Speed” 5G event did bring in a ‘new era’ for phones… but the jury is still out – because the US is not ready for the 5G experience (but China is) and that is the driving force behind this move… And nor, by the way, is much of the country even aware of what 5G means to them. Timmy tried to explain it – saying that this new level of technology will allow you to download/upload faster (how much faster is the question), it has a better camera, higher quality video which allows for better streaming and gaming. What is interesting is that every fall when Apple introduces their newest product it ALWAYS allows you to do all of those things… so what’s new? Their new A14 Bionic Chip – which allows the CPU to perform 40% faster and the GPU to perform 30% faster. In a twist – guess what? They are NOT including the charger or headphones in this cycle – claiming that they don’t need to – there are so many chargers and headphones out there – that they are not going to pollute the planet with more chargers and headphones (very socially conscious)…which is laughable, because what that really means is that they will sell them separately and charge a premium to anyone that buys them. Come on!!! Who is kidding who? The new phones are a throwback to the iPhone 4 design without the iPhone 4 price tag! Prices range from $699 for the scaled down ‘mini’ to $1100 for the ‘pro max’ By the end of the day – the stock lost 2.6%

DAL on the other hand MISSED expectations reporting a loss of $3.30/sh vs. the expected loss of $2.97/sh – burning thru cash like there is no tomorrow. A net loss of $5.6 billion vs. a profit of $1.5 billion one year ago… Taking a $3.1 Billion charge as they fire employees and pay severance… that stock lost 2.6%. In what looks like a bright spot – CEO Eddy Bastian did say that he is hopeful and encouraged by bookings for the holidays as well as expectations for more stimulus. Delta does have a ‘war chest’ full of cash – $22 billion in fact – as they have slashed costs… and deferred new aircraft orders. The Airline ETF – JETS lost 2.1%.

In any event investors chose to digest the latest 3 week surge higher – and back off a bit, preferring to be patient and passive vs. anxious and aggressive as the earnings season begins. The trader types that ‘Bought the Rumor are now Selling the News’ in what is a typical strategy surrounding earnings season.

Virus concerns re-emerge as a real threat – as new infection rates surge around the world – but as I said yesterday – the world is doing more testing, which is good and while infection rates are rising – advances in therapeutics are helping to reduce the most serious/deadly cases… what we hope to see is a decline in death rates due solely to covid19. People with co-morbidity issues remain most at risk of further health complications due to covid but we are even making headway in that demographic as well. While this is not over – it is not the same story we were telling back in March and that is the good news.

News out of the Bio-Tech space causing a bit of concern when it was learned that both JNJ and LLY are halting the trial of their vaccines due to some of the participants becoming unexpectedly sick… Now before you run for the hills – slow down… this is not unexpected at all in a new vaccine trial… and it’s not like the group got sick – it was one person and there could be a host of reasons… I mean JNJ wasn’t even sure that person got the vaccine or the placebo… so don’t overreact… Recall that this happened to Astrazeneca as well a couple of weeks ago and they have since resumed trials in the UK while that attempt to re-start it here in the US. The Biotech ETF – XBI in fact closed higher +1.4% as investors appeared to put these two unexpected issue aside.

US futures are essentially flat – Dow is up 12 pts, the S&P down 5 pts, the Nasdaq +11 pts and the Russell is +1 pt. Investors continuing to just sit and wait as the sense is that the next move is most likely lower vs. higher. The WH is still at $1.8 trillion in a stimulus bill but that continues to get ignored by Nancy Pelosi as she says it falls ‘significantly short’ of what is needed. Markets continue to be in holding pattern now as they hope for a smooth election in 3 weeks… and a peaceful transfer of power IF that is the result. But look – we are once again at the highs of the year with all of these issues which means it could be vulnerable to a pullback on any bad news. While the virus news is concerning – we are not seeing widespread lockdowns here in the states and that is somewhat encouraging… but that too could change in a heartbeat.

The ACB confirmation process continued with every single politician using it as an opportunity to campaign – Kamala the most obvious one as she tried very hard to tone herself down and not come off like a prosecutor as she tried to avoid any missteps or risks that may affect the Biden/Harris lead in the polls. In the end – she expressed her complete desire to NOT vote to confirm ACB – a move not unexpected as she and Joe plan on packing the court (if they win) with 4 more left leaning justices. (this move made clear by Senator Schumer, House Speaker Pelosi and the fact that both Biden and Harris refuse to commit to an answer for fear of losing the left’s vote).

European markets were higher but have since turned lower as the sun rises over the Atlantic. European investors and soon US investors will consider the latest global economic outlook announced by the IMF (Int’l Monetary Fund). They now expect the global economy to contract by 4.4% – but that a plus – because their prior estimate was a contraction of 5.2%… Earnings, stimulus and the virus all on the front burner… As of 7 am – the FTSE IS -0.2%, CAC 40 – 0.2%, DAX – 0.16%, EUROSTOXX +0.1%, SPAIN +0.15% AND ITALY +0.23%.

The S&P closed at 3511 after testing 3500 on the downside… this morning’s action suggests further consolidation in the days ahead as earnings are announced – after investors took the broader market higher over the past 3 weeks. Trendline support is down at 3390… a level I don’t believe we will hit (yet)… we could easily hit that and then go lower if we see a Blue Wave sweep over the country in November as investors re-price risk assets in a completely democratically controlled executive branch.

The talking heads identify 3 options (as anything else has been eliminated)… A sweep (Dems across the board), Gridlock (Biden WH, GOP Senate, DEM House) or the current state (GOP WH and Senate and DEM House). Again – talk to your advisor and make sure you are comfortable with the ‘worst case scenario’ (however YOU define it) because if that DOESN’T happen – then you’ll be pleasantly surprised. 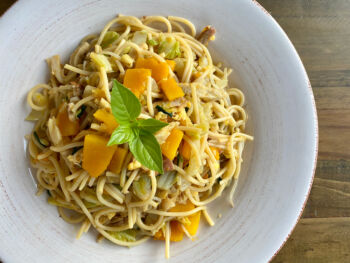 This is another possible 1st course for your Thanksgiving table.

Start with cubed butternut squash – place 2/3 of it in a pot of chicken stock, some crushed garlic, & a stick of butter – careful not to add salt as the stock will be salty enough. Add enough stock to cover the squash (as this becomes the sauce for the pasta). You want the squash bathing in the liquid. Boil until the squash is soft – when done – use a masher (or one of those handheld puree utensils) to mash the squash… You want it nice and thick.

Now add the remaining 1/3 of squash and simmer for 15/20 mins… making sure that the new cubed pieces have time to cook and soften… this way – you get a thick sauce with chunks of squash for the pasta… Turn the heat off and add a handful of shredded parmegiana cheese and mix well.

In a separate pot – bring a pot of salted water to a rolling boil… add the pasta and bring to a boil for 8 /10 mins or until aldente. Strain pasta – always reserving a mugful of the pasta water to re-moisten the pasta… return to pot – add back a bit of the water and stir… do not make it watery – just a bit moist… now mix with the butternut squash – Serve immediately in warmed bowls and garnish with a bit more of the Parmegiana. Always supplying additional cheese for your guests if they so desire.