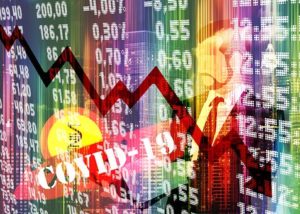 Bang! Kapow! Ooof! Zonk! Bam! Ouch! Pow! In a nod to the 1960’s Batman & Robin TV series – that is what it felt like yesterday… and anyone of my generation will know exactly what I mean! (Click here to see a 1966 scene)

And that is what happened to stocks around the world as covid19 continues to slam the global economy. In addition – legislators in DC called 3 of this country’s biggest Social Media/Tech/Search CEO’s to the table – Marky Zuckerberg, FB, Jackie Dorsey, TWTR, and Sundar Pichai, GOOG… to discuss the state of what is now being called ‘content moderation’ vs. ‘censorship’. And then as the morning turned to afternoon here in the US – word was that both Germany’s Angie Merkel (Chancellor) and France’s Manny Macron (President) were about to make announcements about  renewed lockdowns, including border closures, small business closures, etc. as infections rise and worries about an overwhelmed health care system take center stage.

As the morning turned to early afternoon – Investors watched as European stocks sank further and closed on their lows down 3%-plus – and this did not help the tone here in the US – Add in the Tech interrogation along with new polls suggesting a clear Joey win  and investors had every reason to ‘go slow’ – not because any one of those in itself is dangerous – but because it is all so uncertain… which is why you need to take a breath. As the 4 pm closing bell approached – we found that the Dow lost 943 pts or 3.43%, the S&P gave back 120 pts or 3.5%, the Nasdaq got pummeled – falling 426 pts or 3.7% while the Russell was the ‘best performer’ only falling 47 pts or 2.7%

Today we’ve got 70 S&P companies reporting that make up nearly 40% of the S&P market cap… including the big tech names… FB, AAPL, GOOG, AMZN, & TWTR and after yesterday’s grilling – these results are going to be very interesting to watch… I mean look – these 3 companies have re-written the rules on what is allowed and what is not… trying to take a more active role in ‘moderating free speech’ – as they all try to avoid the chaos that was yesterday. The debate is clear… the GOP also wants to re-write some rules… Section 230 in fact – a law that helps to shield these companies from liability for user-generated content – essentially saying that these 3 CEO’s are hiding behind this and using it as a ‘content moderation’ mandate. The Teddy Cruz/Jackie Dorsey confrontation making the headlines… as Jackie tried to defend TWTR’s view of ‘disinformation vs. misinformation’. Comical really…

The DEMS on the other hand are saying that these platforms are NOT doing enough to guard against ‘disinformation’ which is apparently different from ‘misinformation’ – which is a KEY idea in this conversation… Senator Ed Markey – (D-MA) is NOT concerned that these companies are taking too many posts down – but rather leaving too many of them up. Now just FYI, these 3 companies all lost more than 5% yesterday – but how much was due to the interrogation vs. just the overall weakness in the market – is anyone’s guess. Now while it did not move the needle at all in terms of the election or policy revision – it was entertaining to watch. In the end – the fissures are so great between the two sides that most likely nothing gets done and the content moderation will continue.

In the end – the move yesterday was reminiscent of the swinging pendulum… as it swings from right to left and back again… making a wide arc before coming back to the middle. But therein lies the opportunity for both short term and long-term investors. And while news reports will suggest that investors are abandoning their stock positions – they are not… remember – there are always two sides to a trade – when someone sells stock, someone is buying stock… so it is more just a shift of risk/ownership.

And that is important to remember – the bottom is not falling out at all, although for some it may feel that way – what is happening is an adjustment of risk (prices) in light of everything going on right now…None of which will price stocks in the long term, but will create chaos in the short term. Look – some great names are on SALE!  AAPL is off 10% from 2 weeks ago, TWLO is down 20%, WORK is off 20%, ZM is down 12%, MSFT is off 8%, CAT is off 12%, AXP is down 15%, JPM is off 8% and BAC is off 9%… Pick a name… take a look – Now is not the time to panic at all… because the issues causing the angst are temporary… by mid-November – we WILL have a result and we will know what’s next. By spring time – we will get a vaccine but for now we have better therapeutics and need to prepare for the coming storm that we know is coming (remember deaths are declining even as infections surge)… so keep your eyes on the road, make sure the fundamentals have not changed significantly (because covid has changed the guidance for sure – but again it is temporary – we are learning to live with this new world and we will return to the world we knew).

Overnight – Asian markets came under pressure – taking their cue from what happened across Europe and the US as covid19 surges.  Japanese retail sales fell by 8.7% and the BoJ (Bank of Japan) kept monetary policy unchanged – expected, so no surprise. GDP was revised down to -5.5% vs. the expected -4.7%.  In other news – it was all about earnings… and they continue to be mixed.  Japan -0.37%, Hong Kong – 0.49%, China bucked the trend and added 0.75% while the ASX fell by 1.6%.

This morning in Europe – markets there are bouncing… after yesterday beating… the news of new lockdowns in Germany and France are not causing the panic today that it did yesterday… again suggesting that investors are finding value in the recent selloff. The ECB (European Central Bank) is due to announce their rate decision at any moment… no change is expected. The UK along with Spain and Italy are the next countries to consider new lockdowns… Eurozone consumer confidence is also due out today and the UK continues to fight with the EU over BREXIT negotiations. As of 7 am the FTSE is +0.28%, CAC 40 +0.29%, DAX + 0.62%, EUROSTOXX +0.15%, SPAIN -0.69% and ITALY +0.42%

Like I said – it will be earnings, earnings, earnings… all day… and plenty of talk about the aftermarket reports from the TECH gang… Talk of how the surging infections across Europe will arrive on our shores (again) in 3 weeks will also simmer on the back burner as speculation builds about how we will handle this new wave. Dr. Fauci warning us on CNBC last night that the coming wave will prove highly dangerous unless we get in line and do what we are told. Wear your mask, stay home, socially distance, do not gather, do not get together for the holidays, get your flu vaccine, wash your hands, shower 2 or 3 times/day, wash the towels and mop your floors. Essentially – shelter in place.

With the election now only 5 days away – pay attention to what the market is also telling you… As we discussed – a blue wave WILL produce new policies and those policies will affect businesses – So it is not unexpected to see risk re-price… that is not a statement on which side anyone is on – it is just a fact that investors need to consider as they talk about portfolio construction for the future because different industries will be impacted in both positive or negative ways. Period. And expect a contested election as the polls are tightening, but that does not mean bail on stocks – not at all… because in the political storm there is sunlight. Stick to the plan and talk to your advisor.

Oil also got slammed yesterday – falling better than 5% on the covid hysteria… falling below the September lows of $37.50… and this morning it is attempting to rally (think the overdone pendulum) but continue to get hit as the media warns of a global slowdown (think covid). If the weakness continues then look for it to test the June lows of $35.80-ish… on the upside $40.20-ish now represents resistance – but we have a while before we get back there…

The S&P closed at 3271 down 120 pts… breaking intermediate term trendline at 3306… which now presents another issue… Can the S&P regain its footing or are we headed for the September lows of 3210 before it finds it? I suspect we will – before this over… just because of the angst that is permeating the psyche right now… Remember – once we break technical supports the algo’s go into sell mode to test the next technical level… so sit back, patience is a virtue… Keep your eyes on 3210 to see what’s next. 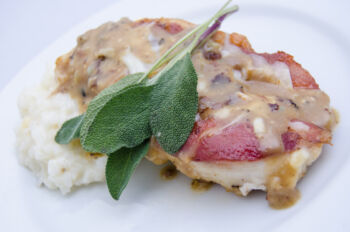 A classic yet simple dish to make – For this you need:

Chicken should be about 1/4 inch thick. Rinse and drain. Set aside.

Place the seasoned flour in a shallow bowl, and dredge each piece of chicken on both sides, then place on a baking sheet. Sprinkle the top of each cutlet with the chopped sage, then cover with a slice of prosciutto.

Press the prosciutto to help it to adhere to the chicken and then refrigerate for 1 hr. Remove and let rest for 20 mins or so before you cook.

Heat the oil and butter in a heavy skillet over medium high heat until lightly smoking, then place 4 cutlets in the pan prosciutto side down. Cook the cutlet until you can see the edges are beginning to brown, about 3 minutes. Carefully flip the cutlets over and reduce heat to medium and cook until no longer pink inside, about 2 to 3 minutes. Place the cutlets on a warm platter, cover with foil, and cook the remaining cutlets.

Once all the cutlets are cooked and moved to the platter, add the wine and lemon juice to the pan and scrapping up and browned bits, cook over high heat until the liquid has been reduced to about 1/2 cup. Add a bit more butter and season with s&p and stir until blended. Pour the sauce over the chicken and garnish with fresh sage leaves.

You can serve this dish with roasted potatoes and a large salad.