Big Tech Does NOT Disappoint – Try the Stuffed Pork Rolls

So suddenly – all that panic that ran thru the markets on Wednesday went ‘Poof’! The angst that was created by rising virus cases and new lockdowns across the Eurozone seemed to be nothing but a distant memory. Earnings – ‘better than expected’ keeping this quarters beats at 84%… above the long-term average… Eco data yesterday was strong or ‘better than expected’… 1st release of 3rd Qtr GDP at 33.1% came in better than the expectation of 32% but was below the ‘whisper number*’ of 34%. By the end of the day the Dow gained 136 pts (a paltry move when you consider it lost 936 pts the day before!), The S&P added 40 pts, the Nasdaq surged by 180 pts and the Russell added 18 pts…

*A ‘whisper number’ on Wall Street refers to the unofficial forecast (vs. the published official forecast) that circulates among the big banks and around Wall St and is reserved for the ‘paparazzi’ otherwise defined as the ‘best clients’. You see, when say Goldy or any of the other investment banks has an official estimate of $3.50/sh for Company A – which is conservative enough to produce a ‘beat’ for that company – they also have an unofficial  whisper number – which is different from the ‘official number’ – which is exactly what it sounds like. Kind of like playing “I’ve got a secret”! Now this is the number that they will tell the firms ‘best clients’ and they will do that a week or two in advance to let those clients ‘wet their whistle’. Capisce? And so it goes… Which is why you need to ask your advisor – I don’t care about the official estimate – What’s the whisper number?

And earnings… it was a big day… and during the day we heard from DNKN, DD, SO, PBF WEX, MLM, CNX, GEO, SYL, PWR.TROW, IP, TAP, FIS, PENN, COP, MCO, AAN, CMCSA, KHC & ICE… and coincidentally they all beat the number! Including the whisper number! But the excitement was all about what would happen after the bell… AMZN, AAPL, FB, TWTR, TWLO, GOOG, SHAK, and they did NOT disappoint… (are you surprised?)

Each of these firms ‘surprised’ the markets (or did they?) reporting better everything! Top line, bottom line, margins, sales, blah, blah, blah… Apple blew past the estimates – earning $64.7 billion in the quarter… but talked about how China disappointed, expressed some concern about iPhone sales and offered NO forward guidance.

AMZN killed it too! $96 billion in the quarter… $96 BILLION! Just want to be clear… in my opinion – there isn’t much more to say… oh – one thing – they expect to earn more than $100 billion in the next quarter…

GOOG – Blew the roof off the house! YouTube growth up 30+% y/y on surging ad revenues – total revs grew10% to $37 billion this quarter…

FB – Revs up 22%, Operating margins down a bit, but reiterated that increased remote working and living will cause the use of online shopping, cloud computing, social media interaction, digital ad will continue for as far as the eye can see…

So you think it’s all good, right?  Stocks will surge today… well think again… US futures are under pressure… AMZN, FB, TWTR, AAPL all quoted lower… as the trader types hit the sell button in a move of ‘relief’… Relief in this case was that the companies beat the estimates provided by the street… and some larger asset managers that hold a ‘core position’ take the extra and whip it around to help create alpha… So for instance – Vanguard owns 1.3 billion shares of the 17 billion outstanding… so if they trade even 1% of that in and out it creates alpha (or you hope it does)… as they ‘trade the range’ – that is different than selling the stock because the story has changed… And guess what else – as Vanguard is selling some of its Apple position – Blackrock is buying… they own 1.1 billion shares and bought another 3 million shares last quarter… Remember what I said yesterday… just because someone is selling it, someone else has to be buying it… which is what makes the market… and transfers some of the risk to another asset manager… It’s fascinating, really… to understand the human condition… and the markets define that condition with precision… and this morning’s action in the markets confirms that…

US futures are getting slammed – down big overnight but appear to be trying to rally back a bit as we close out the month… at 7 am – Dow futures down 175 pts, S&P’s off 20 pts, the Nasdaq down 150 pts and the Russell is off 9 pts… the VIX continues to surge higher as well and this makes sense – as stocks come under pressure… We discussed this in my Tuesday note… In it, I said:

“The VIX shot up and through trendline resistance ($31.33) which now put the September highs (38.60) in the bullseye… Which means stocks could go lower… Capisce?”

This morning the VIX is trading at $37.73 after testing as high as $41.09 – blowing right up and thru the September high of $38.60! And stock futures are suggesting another leg DOWN!

TECH WORRIES are the headlines… apparently, some ‘investors/traders/algos’ are concerned about the outlook – Didn’t we just say that AMZN is expected to earn more than $100 billion this QUARTER! Did I miss something? Didn’t we see revenues surge at every one of these ‘giants’? It’s comical – but it is what makes the market the market… Expect to hear a bevy of analysts discuss, dissect and digest the most recent news… telling you why these stocks are a BUY or why they are a SELL… I mean – Wednesday it was the end of the world… as stocks plummeted and yesterday it was all roses… and today – stocks are getting hit again… (think algorithms driving the action) … In the end – the long-term investor should stick to the plan… eliminate the noise…

The US now has more than 9 million confirmed cases of Corona – Ok… Dr. Gottlieb telling us that cases in Europe are ‘out of control’ and expects the US to get hit with that second wave within 3 weeks… using words like ‘astronomical’, ‘monumental’, ‘enormous’ ‘dense epidemic’… which only serve to ignite new angst… Dr. Fauci saying the same – and expects an equally big hit – neither of them discussing the decline in death rates and the improved treatments… which leaves that conversation a bit lopsided – no? Vaccine trials continue and are going well with some expecting availability this year while others don’t expect it until next year… therapeutics are improving, testing has surged and gotten more specific… caution is still the name of the game, masks, social distancing and handwashing are more important than ever…

Trump signals that he isn’t going out with a fight (oh boy!) Continuing to suggest voter fraud, causing angst across the country… while studies have repeatedly found this to be untrue… (which leaves you to ask – who did the study?) Just sayin’

The most recent polls still have Joey in the lead – by a smaller margin, but still in the lead… more than 90 million votes have been cast (early and mail in) – expect a busy weekend as they both crisscross the country…

This morning in Europe markets are all over the place… Eurozone GDP rose 12.7% France, Italy and Spain contributing the most… while inflation across the bloc came in at negative 0.3%. Yesterday the ECB left policy unchanged but did suggest that they could take further action in December if need be. The world is watching what happens in America next week… even more than they did 4 years ago… As of 7 am the FTSE is -0.14%, CAC 40 +0.39%, DAX -0.13%, EUROSTOXX +0.15%, SPAIN +0.43% and ITALY +0.08%

Eco data includes Pers Income and Pers Spending – exp of +0.4% and 1% respectively Chicago PMI of 58 and the U of Mich Sentiment Ind of 81.2… None of these will drive the action at all… it’s more geo-political… not fundamental…

Oil continues to get slammed… testing $34.92 yesterday before bouncing. Today it is trading at $36.30… rising virus cases around the world slamming demand while increased Libyan production & increased US rig counts add more supply… And the 2 million bpd increase expected in January from OPEC is now under scrutiny. Oil has to hold right here… If not – then we could see a complete collapse down to the $30 range… if supply increases and the virus brings the world to a standstill again… Strap in.

The S&P closed at 3310 up 40 pts… and this morning furfures are suggesting a loss of 20 pts (right now) … It is the end of the month and the tone is negative going into the weekend… Trendline support is 3307… The September low is 3209… very much a possibility… as the VIX surges and the tone gets more negative. I suspect we will test that level – before this over… just because of the angst that is permeating the psyche right now… Remember – once we break technical supports the algo’s go into sell mode to test the next technical level… so sit back, patience is a virtue… Keep your eyes on 3210 to see what’s next. Stick to the plan! 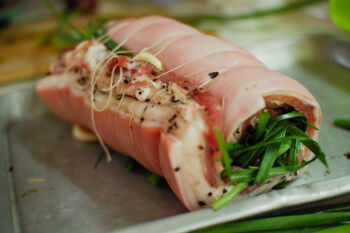 Pork and stuffing… you can’t make this up… Back in the mother land – you might hear someone refer to these as Uccellini.

You can make this dish with pork, veal or even beef, and you can stuff them with anything you like, really. This recipe features pounded thin pork cutlets stuffed with Prosciutto, spinach and Provolone. You can change the cheese – maybe a nice fontina.

Begin by pounding out the cutlets very thin – season with s&p, then lie one slice of prosciutto, some spinach, and a slice cheese. Roll tightly and tie w/ cooking twine. Repeat until complete.

Now roll in the flour.

Heat the butter and oil in a large skillet and brown the pork rolls on all sides. Remove and set on a plate. Add the onion and garlic to the pan. Cook until the onion is translucent then add about 3 tblspns of tomato paste and stir.

Add the wine and stock, and bring to a boil, reduce to a simmer and cook for 5 minutes. Season with s&p then reintroduce the pork rolls to the pan. Cover, reduce heat to medium, and cook for about 8 to 10 minutes. Place the rolls onto a serving platter and stir the parsley into the sauce. Spoon the sauce from the skillet over the pork rolls and serve immediately.