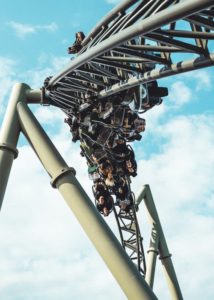 Well, well, well… the race continued and Joey keeps gaining as the minutes turn to hours… while Trump tries to save his Presidency. Eco data coming is as expected with both Initial Jobless Claims and Continuing Claims a bit higher than the expectation but nothing way out of bounds. Then at 2 pm Fed chair Jay Powell took to the podium – announcing the latest FED minutes and as expected he did not disappoint… the FED is not going anywhere – rates to remain low for at least the next 24 months – but he made it clear the DC better start doing something… that the country needs a stimulus package – sooner rather than later. Stocks surged as investors and algo’s go all in maintaining that Risk On tone as the morning turned to afternoon.

The vote for President is beginning to become clear. The expectation of that split executive branch WAS the story (note the use of the word WAS vs IS – more to follow)… leaving investors with the impression that there would be some sense of ‘control’ in a new Biden administration… by the end of the day – the Dow added another 545 pts or 1.9%, the S&P adding 67 pts or 1.9%, the Nasdaq up 300 pts or 2.6% and the Russell up 44 pts or 2.7%.

The swing states remain in focus and yesterday morning it was all about Arizona… that was being identified as the state to watch – as Wisconsin, Michigan & Nevada were being tallied for Biden while Pennsylvania, North Carolina and Georgia were in the Trump camp… Word that Senate Majority Leader Mitchy McConnell was appearing to be a bit conciliatory in his comments (meaning he was accepting the Trump loss) seemed to help the mood in the markets as it is assumed he was prepared to work under a Biden Presidency. (News outlets making it clear that the two men are not only friends but work well together and the assumption there is that it will help the country heal).

But something ‘funny happened on the way to the Forum’ as the sun began to set over the country… Georgia – which had been in Trump column was beginning to shift… Shift? How so? Wellllllllll – it’s those mail in ballots that are now causing the tide to turn… As the day wore on – the Trump lead began to shrink – as it is doing in Pennsylvania as well – Suddenly – no one was really paying attention to Arizona… partly because many now assume that AZ will go to the Biden camp. This morning we wake up to a different story… Overnight – Georgia jumped the fence – OR appears to have jumped the fence (leaving many to now ask – What about Pennsylvania?) – as the vote counting continues. Biden is now 1097 votes ahead in the Peach state– so it is close, very close – mail in, absentee, and military votes still need to be counted… so strap in… (In this case – because of the tightness of the vote – expect an automatic recount) … And not only did they jump the fence on the Presidential results – but now BOTH senate races are in contention… In an almost unbelievable turn of events neither GOP senator won 50% of the vote in their elections (you ask how? Think write in or 3rd party candidates that steal even 1% of the count have the ability to screw this up)… both Kelly Loeffler and David Perdue are now being forced into a runoff election on January 5th, 2021… and THAT has the ability to SWING the US Senate into Democratic control which will change the picture significantly… giving the Dems control of the executive branch (WH, Senate and House) … And just one more thing (as if you really want it) a Senate tie – 50 GOP and 50 DEMS will push the tie breaking vote to who? You got it – Kamala! …and this morning stocks are under pressure.

Eco data this morning includes the ever important NFP report…Non-Farm Payroll. Expectations of +593k jobs created, manufacturing payrolls to rise be 55k. Unemployment to drop to 7.6%, Avg hourly earnings at +0.2% and the Underemployment rate of 12%.

US futures are down triple digits – but before you go off and jump ship – think about it for just a minute or two… the Dow is up 8% in 4 days… the S&P is up 9%, the Nasdaq is up 10% and the Russell is up 8%… in a straight line… Investors piled in hard on the idea that we would end up with a split executive branch… but just when you think it may have been over – it isn’t… and that is causing some week’s end profit taking… at 6 am, Dow futures are down 185 pts, the S&P is off 30 pts, the Nasdaq lower by 146 pts and the Russell is off 10 pts… Now those moves are almost insignificant based on the point moves up – but as well all know – what goes up must come down… just how far and how fast that might happen will depend on what the outcome now is in Georgia… I mean it feels like the country is expecting a Biden win (no matter that Trump will scream and yell) so that part of the story appears to be set… But, who would have thought that Georgia would be at the center of the storm now? I mean – it’s Georgia! They have 10.6 million people out of the 350 million people in the country… 3% of the population is now in the spotlight… and will likely determine what the next 2 yrs could look like… I mean I’m not talking about Trump vs. Biden – (we already know that answer) I’m talking what happens to the Senate? Will Georgia change the course of history? Oh my, this is a nail biter… In the end – the pollsters and the smart money may NOT believe that Georgia will flip the Senate – but who ever thought Trump would be President? Are you kidding me?

I mean think about it for one minute… and I’m talking about my Georgia readers… the fate of the country is now in your hands… a divided gov’t will keep the system of checks and balances alive and well as our forefathers imagined. A one party gov’t will allow a Biden administration to go left… and once Kamala moves into the WH – we will go further left… so – it’s up to you… the country is watching and waiting to see what YOU decide.

European stocks are also off this morning on a bit of profit taking being fueled by the newest uncertainty over the US elections …and by the continued rise in corona virus cases. Italy and Greece now making headlines as the virus continues to spin out of control. Italian PM Giuseppe Conte announcing new partial lockdowns under a new tiered system while Greece (a country we haven’t heard from in years) announced a national lockdown. German industrial output rose by 1.6% well below the estimate of 2.7%. Corporate earnings continue to be reported although at a slower pace as the season is about over – are not helping the mood today… Europe got a number of disappointments and while they are not deal breakers – they are negative stories on an already weak day… so just like investors have been focusing on the positives for the past week sending markets higher – expect that today – investors will focus on the negatives giving them reason to take some money off the table. At 6:30 am – the FTSE -0.09%, CAC 40 -0.59%, DAX -0.84%, EUROSTOXX -0.61%, SPAIN -0.70% and ITALY -0.33%.

Oil is once again under pressure… the new uncertainty over the US elections along with new lockdowns across Europe due to covid and the increasing concerns that a surge in virus cases here will once again bring the economy to stall speed are all impacting the psyche this morning. And with no concrete evidence that OPEC or the Russians are considering cutting production anymore – the whole supply/demand conversation once again takes center stage. At 6:45 am – WTI (West Tx Intermediate) is down 3% to $37.51… as the uncertainty continues.

The S&P closed at 3510 yesterday, blasting thru another century mark as investors continued to celebrate what they thought was completed… but as noted above – this story is not over… and it appears that now we will have to wait until January 5th before we understand which way the Senate falls… the country has accepted a Biden win (I think that is clear) – but now it’s about the Senate… We are on the razor’s edge… and the outcome will determine so much about where the country goes… If the concern builds today and trader types and algo’s get anxious – I would not be surprised to see a swift pullback to the trendline which is at 3400 or 2.8% lower. Buyers will step back today and bid lower… nothing to get amped up about considering the 9% move up in 4 days!  It is still not perfect, and it will still have challenges ahead and now we have to keep January 5th in our sights. Stick to the plan! 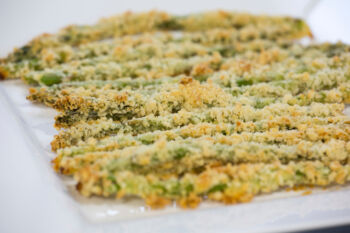 Look – someone is getting fried… so try the Fried Asparagus Spears…

This was one of my grandmother’s signature holiday dishes. They are great! And you can make these a day ahead to help you plan for your thanksgiving table.

Begin by trimming the ends of the asparagus – removing the white part of the stalk. Now place in a frying pan full of water and blanche them for five mins or so until they are cooked – but not limpy… they should be firm to the bite but not raw… immediately place in a cold bath to halt the cooking. Remove and pat dry.

Next – make a mound of flour on the counter – beat 6 eggs in large pie plate to make an egg wash – and place a mound of Italian seasoned breadcrumbs in another pie plate – set up like an assembly line. Flour, Egg wash, then breadcrumbs.

Dredge the asparagus in the flour – then dip in egg wash and then roll in breadcrumbs – set aside. Repeat until complete.

Now in a large frying pan – heat up enough olive oil so that you cover the bottom of the pan… let it get nice and hot so that when you place the asparagus in the pan – it sizzles and browns the breadcrumbs onto the spear. Turn to brown all over – now place in clean plate and serve. Makes a great side dish for your Thanksgiving table… they are delicious.