It’s all about PFE/BioNTech and the Vaccine…Joey who? – try the Chicken Marabella 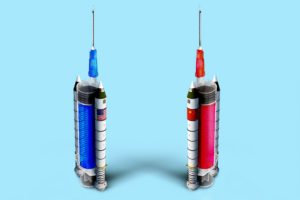 Biden takes the WIN and tells the nation that it ‘time to heal’  – Philly comes out of left field to push him over the edge in Pennsylvania – half the country erupts in celebration, coming out in droves ignoring all of the social distancing rules… although many were wearing masks so the 6 ft rule no longer applies I guess – but that leaves us to ask – were all those celebrations just another set of ‘super spreader’ events? World leaders offer calls of support and express hope for Biden. The Mayor of Paris tweets out “Welcome Back America”! China & Russia remain silent – saying that they will wait for the ‘official results’ of the election before offering congratulations – and that speaks volumes about what they think… while Iran expects Biden to rollover and say “I’m sorry” for past US mistakes and to adhere to prior commitments and respect of global rules. Trump remains quiet, almost defiant and out of sight as he plans his (exit) strategy. Expect a list of pardon’s to be coming the days ahead. Markets around the world surge as investors consider a new America and a new administration and a new vaccine!

Global markets are all higher – and while all the good news this morning is good – we won’t really know what our gov’t looks like until January 6th… because the Georgia runoff is set for January 5th… (more below). So – you have 9 more weeks of this headache… but for now – markets are celebrating.

At 7 am – The Dow futures are up 1300 pts, the S&P’s are up 150 pts, the Nasdaq is up 275 pts and the Russell is ahead by 25 pts. European markets are all ahead by better than 3%. The Biden transition team has already begun to put in place a Covid19 response team – members to be announced today. Covid 19 cases are also surging around the world and here at home… but guess what? Investors and markets are NOT concerned about it… They recognize that there are protocols and therapeutics that are helping to manage the pandemic and they recognize that there is a vaccine on the way. And now – the Pfizer/BioNTech is saying that their vaccine has a better than 90% efficacy rate – and that is amazing… there are still some questions to answer but all indications suggest an amazing efficacy rate with no side effects. If you missed last night’s 60 Minutes episode – I suggest you watch it. Four-Star General Gus Perna leads the operation – it is a must see for everyone.  Click here for the 6 min segment…

Expect more good news from Moderna, JNJ, REGN etc., as well. Biotechs are expected to surge today as a result -keep your eyes on the XBI – Biotech ETF – quoted up 2.5% in pre-mkt trading.

Back to Biden… Headlines this morning promise that on his first day in office – he is set to reverse the Paris Climate Accord, rejoin the WHO (World Health Org), reverse travel bans on some Muslim countries and re-instate the DACA Program (Deferred Action for Childhood Arrivals) to allow those undocumented immigrants that were brought here as children to be able to remain. None of this unexpected or market moving… just news.

Expect a broad rally today across the board as the temperature gets turned down. Renewables – a sector that was expected to prosper under a Biden Administration are surging… Nextera Energy- NEE – is quoted up 6% in pre-mkt trading (it is up 26% ytd)… besides the nuclear power plants that they operate, they also produce energy via wind, solar and natural gas. And the alternative energy story is one that is sure to benefit under his watch as he has already promised to end fracking and dependence on oil and coal. (I mean let’s be honest) Either way  – alternative energy will be the focus and that is not bad (think climate change), but it will have unexpected consequences… Remember – you can NEVER do just one thing… one action causes a range of reactions… and the world changes. TAN is the Invesco Solar ETF which tracks the MAC Global Solar Energy Index (SUNIDX) that includes all solar technologies across the entire value chain – expect to hear more about this index in the years ahead. That ETF is up 150% this year and is also quoted up another 6% in the pre-mkt this morning.

As noted – it is now assumed that we will have a divided gov’t –stocks are enjoying the idea that we aren’t going far left and that the mandate was for a centrist gov’t not a socialist gov’t. As such – last week was divine… Tech stocks became the ‘new safe havens’ the XLK rallied 8%, Healthcare stocks – XLV also rose 8%, Financials gained 5.5%, Basic Materials gained 10%,  Industrials rose 6% after falling a bit when the market thought it wasn’t getting a massive stimulus plan… and while the stimulus plan may not have a $3 trillion price tag, it will most certainly have a $2 trillion handle and that ain’t so bad.

And so how many days before we find out what happens to the ‘official vote tally’ and the Georgia Senate race?  That answer too – is blowin’ in the wind…

And so – while we think one of the most contentious elections in history is over… It really isn’t yet… Trump and some in the GOP threatening to file law suits in at least 3 states as they look to challenge the votes and the counting… and while they have every right to do so, history shows us that this is a moot attempt at trying to change the outcome… Listen – NOT happening… It’s time for you to go home. Exit gracefully… if you want the history books to say anything nice…

Now – Say Hello to Georgia (that state that is positioned between Alabama, Tennessee, Florida and South Carolina). As luck would have it- both of their senators are up for re-election in the same year… (Kelly Loefflers seat is a special election to fill the rest of the term for the seat vacated by retired Republican Sen Isakson).   So we can expect 9 more weeks of nasty campaigning, nasty rhetoric, nonstop political advertising as both sides gear up for what is going to determine the course of the country and history on January 5th, 2021.   Both sides already lining up, raising even more money in support of their respective candidates – and as such – we can expect more volatility from the markets depending on which way the ‘wind is blowin’ from day to day…. Remember there are 4 candidates so there are 6 possible outcomes and the only one that guarantees any sense of control for the country is for the incumbents to stay seated… giving the GOP 52 seats with the Dems having 48 seats… anything less borders on one party control and if that happens – then all of those ideas about higher taxes and extreme costly ‘progressive’ policies suddenly are on the table again….and THAT is the issue for the markets going forward… Now we can argue that point – but let’s not…It’s exhausting.  We will have plenty of time to discuss.  For now – the markets are celebrating, and your portfolio is benefitting.

Eco data today includes:  Mortgage Delinquencies… last month it came in at 8.2%… and the survey says?

Earnings are essentially over… so the focus will now return to economic data, the Trump reaction (not a market mover but good reality tv), the new Biden Presidency, actions he takes and actions he promises to take… and the vaccine… The rally this morning will take us to new  highs and remember – new highs beget new highs… but much of this jump is a knee jerk reaction… so while you can jump in on some ideas, don’t go changing the whole portfolio based on today’s move…

Oil is rallying… all reports suggesting a Biden win with a split congress… is the best outcome for the US and the world. Leaving trade wars and higher taxes off the agenda… WTI is exploding higher as well… up $3.34 or 9% this morning… taking us back to up to $40.37/barrel…

The S&P closed at 3509 on Friday… and today it looks like it is going to break thru another century mark… 3600… as the bell rings…  but as noted above – this story is not over… and it appears that now we will have to wait until January 5th before we understand which way the Senate falls… the country has a new President Elect – that is clear – but now it’s about the Senate… We are on the razor’s edge… and the outcome will determine so much about where the country goes… But for today – the move up is going to go to PFE and the Vaccine – more than to Joey and the Dems. 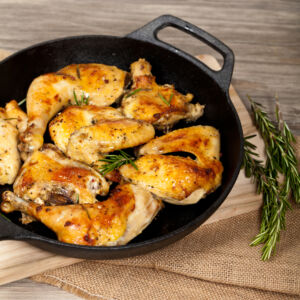 This is a roasted chicken pieces dish dressed in a prune/capers/and olives marinade…and while that may not sound like something you’d like… Don’t judge a book by its cover. This is a great dish for home and for a dinner party… It goes a long way. You can find a range of versions of this dish from different chefs, but this is the way I make it.

For this you need: Olive oil, Red wine vinegar,  1 ½ c large pitted prunes, 1 c of large green olives sliced in half, ½ c of capers with the juice, 2 cloves of smashed and chopped, dried oregano, s&p, 6 thighs, 6 legs,  (You can also use the breast, but breast meat is dry) ½ c of lite brown sugar and 1 c of dry white wine… not a chardonnay or anything fruity…

When ready – get a nice cast iron skillet and put it on the stove and turn up the heat. Now remove the chicken pieces and brown on all sides in the skillet first and then place in a baking dish – skin side UP – making sure not to crowd. They should all be lying flat. Now sprinkle with the brown sugar… not too much, but just enough….

In that same skillet – add the marinade and cook it for 5 mins or so… just really to heat it up and cause it to come together. Now add the marinade to the dish making sure to place it around the chicken – you want to skin to be free of anything – so that it crisps up and gets nice and golden brown. Now add the wine AROUND the chicken – again don’t pour it over the chicken. Roast for 40-45 mins – Remove and cover tightly – allowing it rest for 10 mins… New present on a serving platter with a large mixed salad – dressed in a lemon/olive oil dressing w/s&p and oregano.