So Technology appeared to open its eyes yesterday as investors went on a shopping spree – looking for bargains across the industry – after some tech names got absolutely clobbered on Monday and Tuesday after PFE’s blockbuster vaccine announcement… conversely – the winners of late – including Energy, Financials, and Industrials took a breather… as some investors took profits after the surge, taking that money and putting it to work as they looked for bargains in the tech space. It was also Veteran’s day – the bond market was closed, as were the banks, so volumes were light causing both those moves to be a bit exaggerated as many of the participants were away from their offices. By the end of the day – the Dow gave up 24 pts, the S&P gained 27 pts, the Nasdaq surged by 232 pts and the Russell was flat.

It was a mixed day for sure… it started with the latest from our friends at Goldman… guess what? Davey Kostin (GS US equity chief strategist) published a report titled “The Roaring 20’s”… (Does he not recall that the ‘Roaring 20’s of the 20th Century ended in the Great Depression of the 30’s?) In this report he calls for stocks to surge to 3700 by year end and then to surge by another 20% by year end 2021… divided gov’t, more stimulus and a vaccine all of the drivers for his report… In a note to clients he suggests that ‘stocks will leap to all-time highs before year end and keep rallying through 2021 thanks to coronavirus vaccine optimism and stronger corporate earnings’.

In any event – Jimmy Cramer made sure to commend Davey for his work and brilliant analysis – although he too questioned the title of the report… and that did set the tone for what we saw happened to the recently beaten up tech names… They surged… as investors and traders went on a shopping spree… names that have gotten beaten up suddenly found plenty of buyers… and Boom – off we go… Now many are concerned that tech was suggesting that the party was over… which is a bit ridiculous – Tech isn’t going anywhere – but the tech that has led us out may not be the tech that leads us out… right? Remember – there are more than 5 tech names… so do your homework. Tech representing the IoT (Internet of Things) is on fire and will continue to be on fire…

Take a look at SNSR – an ETF that does exactly that. It looks at a diverse set of sectors that are sure to benefit as the world goes ‘more tech’. Think smart homes, smart cities, connected cars, connected appliances, smart utility grids, medical devices and the list goes on. This ETF is up 26% on the year… or 100% off of the March lows… and will continue to benefit whether or not we get control of the pandemic – because this sector of the tech space is not driven solely by the virus, it is driven by advances in tech, it is driven by increasing efficiencies across industries, it is driven by how the world will connect, communicate and process information in the years ahead. Now look much of this tech is used in tech names that have helped us get thru this pandemic, and that’s good. But when this pandemic is over – this tech will continue to change the world and will continue to find a place in your portfolio. Which doesn’t mean that WFH tech names won’t – it just means that the tech industry is much bigger than the names you constantly hear about.

And then on Wednesday evening – Moderna announced that its phase 3 trial had accrued enough data to submit to the independent monitoring board… and this could be the next data point that sends the market into a frenzy… Now remember – it is the job of the Independent board to review and then report on the data – is it effective, is it a failure or are the trial results inconclusive? Here’s a clue – the smart money is betting that Moderna will also report very good results…Why? Because it uses the same mRNA technology that PFE uses. In fact, Drew Weissman – immunologist and mRNA expert at UPenn helped to develop the very technology that we are discussing and had this to say –

“Overall I would expect similar results. It is hard to imagine how it would be much different” (think 90% efficacy rate)

And if that is the case – then I would expect another similar reaction in the markets… the broader market, industrials, energy, financials, materials, infrastructure names, utilities, consumer discretionary, IoT (Internet of things also a tech play) should all benefit… while some of the names that have rocketed higher during this pandemic should re-price and come under more pressure as the world sees the light at the end of the tunnel.

Now here is the twist… if Moderna’s results are NOT the same as the PFE results – it will cause some to ask why not? And then maybe cause them to question the PFE results… which could once again raise the temperature in the room. But – I don’t’ see that… I’m going with the idea that Moderna’s results will fall in line with what the experts expect… I’m no scientist, so therefore I defer to the men and women who are. So get ready – follow the plan… position yourself with high quality names across a range of sectors that will produce a well balanced portfolio. If you want to play with the market – then do that in a separate account… but when you want to invest for the long term – keep that plan separate and apart from any ‘play money’.

Eco data today includes: CPI – exp of +.01%, ex food and energy of +0.2%, Initial Jobless Claims of 731k while Cont. Claims of 6.8 mil – both numbers that should show improvement over last month and continue to suggest that the economic rebound is happening. Now while these numbers are important – I can’t see them being a real market driver at all UNLESS they are so different than the expectation. A higher number will once again suggest that the economy Is not improving – reiterating FED Chair’s Jay Powell concerns that the second wave of the virus has the ability to disrupt any recovery – which will then put more pressure on both administrations (Trump and Biden) to do something… and if Trump does nothing then expect Biden to go overboard with a BIG plan… and that will be good for stocks. If the numbers are better than expected, it will take some of the pressure off a BIG plan but will still demand a plan. In either event – expect Biden to talk BIG as he is riding his election win all the way to the finish line.

US futures are flat… right now… as the market awaits the eco data and the Moderna data… now we may not get that today per se, but the tease is out there, the media is discussing it, so expect it to be a driver for sure… as the world continues to get slammed with new and rising cases everywhere… here in the states – we are awaiting a spike in cases after all of those ‘celebratory events’ last weekend that saw big crowds of people gathering in cities around the country, NY is the latest to announce a new round of lockdowns… as the NYTimes runs with this headline –

DiBlasio suggesting that ‘a lot more restrictions’ are on the table. Leaving us to wonder – How many other cities in the US are in the same position? So any news of a vaccine will surely help the psyche, but realize that it does not exist in any quantity to stop the spread at the moment… and this will be a driver along with the political drama. Trump still not conceding and this morning the media is turning up the heat on the broader party leadership for ‘failure to lead’… and that can cause short term angst for many – but remember it will not price stocks in the long term… so any sell off associated with politics is almost always a gift… so talk to your advisor.

Oil is under a bit of pressure which also makes sense after its explosive move higher in week. News that OPEC+ and Russian may consider extending production cuts or even increasing them is suggesting that they too expect the surging virus to slow demand… and that is causing some oil traders to ring the cash register… again – you know how I feel… I think energy remains in the $40/$50 range for now.

The S&P closed at 3572 – smack in the middle of its trading range yesterday… 3557/3581. This morning’s caution is expected but could turn into a surge if we get that Moderna news and if that news is what the market expects. If it is not, then look for the algo’s to kick in and send stocks lower… a swift move to 3400 would not be out of the question if that’s the case. For now – I think we remain in the 3400/3600 range… positive news could see us test the Monday highs of 3645… Stick to the plan. 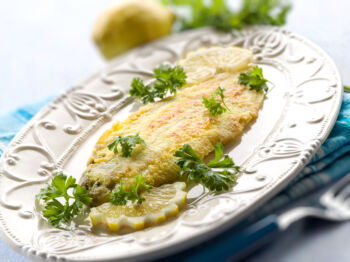 In a bowl – mix 3 eggs and a handful of parmegiana cheese and some pepper – beat well – set aside.

In a large sauté pan – heat up the butter and oil….

Place in the hot sauté pan – do not crowd…

Cook the sole until nicely golden browned (maybe 2 mins max?) – now flip over and repeat – remove from pan – and place on an over proof dish and put in the over to keep warm until you finish all the pieces of sole.

Now – in the same sauté pan – add in some chopped garlic, fresh lemon juice (squeezed) and maybe 1/2 c of the marsala wine and 1 tbsp of corn starch (to thicken).  Stir until you have a nice thick sauce.

Serve the sole on a bed of herb flavored rice pilaf and pour the ‘sauce’ over the fish.  Serve immediately.