Yesterday – I got the chance to appear with Nicole Petallides on the TD Ameritrade Network – to discuss the state of the union…..you can watch it by clicking here.

Stocks came under pressure yesterday… markets around the world were weaker as coronavirus cases surge – word that the virus has the ability to ‘wreck the economy’ and that hospitals in parts of the world now reporting that they are overwhelmed once again set the tone. Then as the sun rose over the east coast – that story caught fire here as some states report the same conditions… Governors in NY, MD, MI, IO, and UT all imposing new restrictions. NYC announcing new ‘lockdowns’ on gyms, restaurants and bars while also saying that gatherings of 10 or more are no longer allowed while Chicago Mayor Lori Lightfoot issued a 30 day STAY AT HOME order and this is causing a renewed sense of unease as investors re-assess how to position themselves for the coming wave. And then commentary by 3 of the world’s top central bankers (ECB’s Legarde, FED’s  Powell and BoE’s Bailey) warning that the prospect of a vaccine is NOT enough to put an end ‘to the economic challenges created by the pandemic’ only added to the downtrodden mood.

Investors sold everything across the board… tech lost 0.9%, financials – 1.6%, healthcare – 0.37%, energy-3.2%, basic materials 2.1%, consumer discretionary -1.2%, consumer staples – 0.27%, even utilities – usually seen as a ‘safer haven’ lost 1.6%. The money raised moved into what we do call the ‘safe haven assets’ Gold and Treasuries. The excitement over the PFE/BioNTech vaccine news nothing but a distant memory and all of the talk about the coming Moderna news falling on deaf ears. By the end of the day, the Dow lost 317 pts or 1.08%, the S&P’s gave up 35 pts or 1%, the Nasdaq lost 77 pts or 0.65% and the Russell lost 28 pts or 1.4%. The money moved into the more traditional safe haven assets – gold and treasuries.

Now as if the tension isn’t rising enough and the heat in the kitchen is not hot enough – a new name appears on the world stage – Michael Osterholm – an epidemiologist, regents professor and director of the Center of Infectious Disease Research and Policy at the University of Minnesota. Now I looked – he has a PhD, but is not a Dr. per se (like Dr.Anthony Fauci, or Dr. Scott Gottlieb) … but his credentials appear to be spot on. So, let’s move on… What happens next only served to raise the temperature in the kitchen even more – while speaking at a virtual event at St. Olaf College he made this comment – “We’re facing a winter of COVID HELL”. He then spoke about his new role as a member of Joey’s coronavirus task force and apparently Mikey told President Elect Joey Biden that that the country needs to go into ‘total lockdown’ of 4 – 6 weeks. He then reveals his financial analytical skills telling the President Elect that:

“When you look at the personal savings rate in this country, it’s now gone from about 8% to over 22%. (not sure where he got that). We have a big pool of money out there that we could borrow. (where is it hiding?) The historic low interest rates by the Federal gov’t, (Fed Reserve sets policy not the gov’t) we could pay for a package right now to cover all of the wages, lost wages for individual workers, for our losses to small companies to medium sized companies, for city states, county governments. We could do all of that.” (Can he or anyone really clarify just how much money that is?)

Now Biden keeps telling us that a total lockdown is not his plan – but the plan keeps changing (kind of like “I’ll end fracking” and then “I won’t end fracking”) … so we’ll see… And this sent the algo’s into sell mode.

[Quick question… Isn’t St Olaf College the one that Rose Nyland – The Golden Girls – (aka Betty White) attended? And here I thought that was a sitcom named college!]

Next on the list of panic moves is the hoarding of toilet paper and cleaning supplies as the nation contemplates this lockdown. Grocery stores now limiting customers to 2 packages of 8 rolls of toilet paper… so here is the gimmick… Go to the store and buy 2 packages, pay for it, leave and put it in your car. Now put on a different mask and a new of sunglasses (so you look like a different person) and then go back and buy 2 more packages… rinse and repeat… Do you start to see what is happening? Grocery store shelves are once again empty – reminiscent of the March/April panic… It’s only a matter of time before they start talking of cancelling Thanksgiving, Hannukah, Kwanza and Christmas – although I did hear that the Rockefeller Chirstimas Tree has been cut down… a 75 foot-tall, 11 ton Norway Spruce from Oneonta NY and is on its way to NYC. In any event – today is Friday the 13th – Just in case you needed anything else to worry about… it’s called Triskaidekaphobia (fear of the number 13)

This morning – markets around the world seem to be ignoring any of the negativity seen yesterday… apparently all of the negativity is causing speculation on new stimulus plans to help economies around the world that have been hammered by the virus. Although this morning we also learn that the Trump Administration is ‘stepping away’ from any relief package discussions leaving it up to congress and Nancy Pelosi – to revive the negotiations with Treasury Secretary Stevey Mnuchin. Headlines at 6:30 am this morning – reveal that Pelosi and Schumer re-propose their original $3.4 Trillion relief package. Game on!

Didn’t they do that yesterday?  Didn’t they decide it’s not good, what changed overnight? Nothing really, other than what was speculation about a BIG stimulus plan being worked on by Nancy Pelosi and is now out there… whatever! Look – we discussed this… expect more volatility in the weeks ahead… the virus, new lockdowns, political uncertainty and policy uncertainty all taking their toll on investor psyche. The VIX remains low, trading below all trendlines – but that can change on a dime – depending on the headlines. I suspect that talk of a vaccine and a relief package will dominate the conversation especially as the virus surges. Let’s see how Mnuchin responds this morning… as his days are numbered. In the end – stick to your plan… talk to me Goose.

European markets opened lower but are now up. The media suggesting that the stimulus announcement by Pelosi… and news that Biden won Arizona is causing investors there to go risk on… Stimulus maybe, but AZ? Do we really think the Europeans care about Joey taking Arizona? Come on, man! They are reaching for content… AZ means nothing to the Europeans – the world has accepted that Biden won… period… Let’s move on. The Eurozone did publish the second estimate for 3rd qtr GDP growth -4.4% vs. -4.3%… a non-event. At 6:45 am – FTSE -0.37%, CAC 40 + 0.39%, DAX +0.17%, EUROSTOXX +0.28%, SPAIN +0.77% and ITALY+0.38%.

Oil is under a bit of pressure this morning as the covid story continues to hammer it. The US gov’t did report that crude inventories rose by 4.3 million barrels last week vs. the expected fall of 913 million barrels. And this gave oil traders an excuse to hit the sell button… I still think energy remains in the $40/$50 range for now.

The S&P closed at 3537 – down 35 pts. This morning’s surge looks to take it back to 3545 leaving it within the weeks range of 3518/3645… Expect lots of discussion of the Pelosi plan again… and how Mnuchin will respond. Will he roll over or will he keep digging his heels in? At this point you ask – Why does it matter? Because it does… he does not want to be seen as being beaten up by Nancy and Chucky so I expect it will be more of the back and forth – as Nancy is now betting on a GA Senate win, which will give her and the Dems complete control… Sit tight… we remain in the 3400/3600 range… 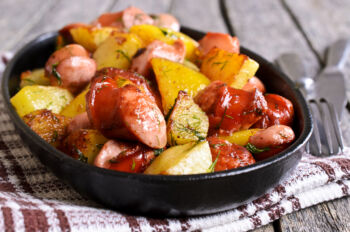 Now that I found out that St Olaf was a real person and St. Olaf college is a real place and that Biden’s newest covid team member gave a speech there – I thought it appropriate to serve up a Norwegian typical dish. (now to be honest- I had to Google this because I don’t know any Norwegian recipes!)

Potato sausages are just what they sound like – Sausage’s made with pork and potatoes! You can buy them at any grocery store in Norway or even in Minnesota, I guess, since there is a large Norwegian population there…

For this you need: the potato sausage and water.

Begin by boiling the sausage ring in a pot of water. Bring to a boil and then turn the heat down to med low and simmer the sausage for 30 mins. Remove and place on a dish. Now slice the sausage into 1” pieces.

Heat up a sauté pan and spray with vegetable oil – add the sausage and brown – maybe 3 mins.

And then I assume you serve it with something… but the recipe didn’t say anything else! So be creative… maybe a vegetable or a salad? Not sure… if I have any Norwegian subscribers, can you clarify for me?

Have a great weekend!