Moderna Stuns the Market with 94.5% Efficacy Rate – The End is in Sight! – Try the Roast Turkey

Not seeing any safety concerns and will seek emergency use authorization immediately… Shelf life is up to 30 days in a regular refrigerator! 20 million doses to become available in the US before end of year. More news coming… Markets surging…

Drivers in the market continue to be the virus, the vaccine, the election and whether or not Donny will exit the White House (without incident) in January. The macro data – while improving (at least in the US) is playing less of a role in the investment process right now – as analysts/strategists/investment committees and investors attempt to identify the winners/losers in this ongoing fight against covid19.

Stocks rallied on Friday – with the Russell Small/Mid Cap index surging 2.08% to a 2-year high – leaving it up 13% so far this month… far ahead of its sister indexes. It is the ‘recovery trade’ – for the US economy and if the US economy recovers then domestic companies should benefit (thus the move in domestic names defined by the Russell) … and we can thank a variety of headlines that helped the surge. PFE/VBioNTech, Moderna and now JNJ providing much of the action last week and are expected to provide the action this week and beyond. The idea that a vaccine is on its way did a lot to help investor psyche – even in the face of surging coronavirus cases in the US and around the world. European countries in various forms of lockdown – Germany, Spain, France and the UK – Paris for example allowing for only 1 hour per day to go shopping and or exercise while Germany’s economic minister said that Germans must live with ‘considerable restrictions for at least 4 or 5 months’. They have closed bars, clubs, cinemas while restaurants can only do take out and people can only meet outside with members of another household not to exceed 10 people.

Here at home – various states across the country are imposing a variety of lockdowns as well – some closing down whole cities while others are less restrictive, but the sense is that with cases rising – we can expect lockdowns to increase across the nation just as we enter the holiday season. Yet – none of this is causing angst in the markets (at least not yet) as stocks around the world continue to surge. On Friday – the Dow added 400 pts or 1.3%, the S&P’s were up 48 pts or 1.36%, the Nasdaq ahead by 119 pts or 1.02% and the Russell added 36 pts or 2.08%. And for those watching the value vs growth trade… For the week – the SPYV (S&P Value ETF) rose nearly 6% while the SPYG (Growth ETF) rallied 2.6%. Capisce?

Economic data last week – all ‘fell in line’ with the expectations – none of it leaving a gaping hole in the analysis allowing for asset managers to plow ahead. Neither the PPI (Producer Price Index) nor the CPI (Consumer Price Index) suggested any concern about rising inflation so there is no concern right now that there will be any change in FED policy anytime in the near future. In fact – last week – we heard from 3 of the world’s top bankers (Powell, Lagarde, and Bailey) and they remain concerned that the virus will slow any economic turnaround if gov’ts don’t do more to stop the bleed. The bankers can only do so much – and with rates around the world at zero (or even negative) they appealed to gov’ts to step up the stimulus and that helped to drive markets higher. And with a new President Elect in the US – the idea that a BIG stimulus plan is in the works is only helping the mood in the US and the world.

And this morning – stocks around the world are up again… it is RISK ON for investors as money moves into value and cyclical names and out of the more traditional defensive names. Dow futures are UP 545 pts, The S&P’s are ahead by 44 pts, the Nasdaq is adding on 66 pts and the Russell is ahead by 21 pts. Investors are looking ahead – they are clearly looking thru the immediate threat of the virus and focusing on the vaccine and the recovery trade. Surging infection rates doing little to stop or halt investor appetite for quality value names as the ‘sexy’ high growth tech names take it on the chin a bit… but this should not be a huge surprise as so many of these names have outperformed this year.

But before you go and jump all in – try to remain focused on what could be some short-term disruptors in the market. While the vaccine news is exciting – it is still in the works, there is no definitive timetable yet never mind that there is not expected to be enough of any vaccine to go around… And we still have to deal with the global economy whose growth remains at risk due to the latest lockdowns, and in the US – while it is mostly agreed that we will have a change in leadership at the top of the ticket – the Senate remains in play and we won’t know that result until January 6th – after the Georgia runoff for both GOP controlled Senate seats takes place. A loss of both seats to the Dems – will swing the balance of power to the Democrats across the entire executive branch and that could change the WHOLE story vs. what the market is expecting the story to be as of today. The market expects a split congress – so anything different will most likely cause markets to re-price in the short term before finding balance. Estimates range from 0% pullback (as if none of it matters) to a 20% pullback – so opportunity knocks depending on the size of the pullback you think may happen. In any event – a pullback is a pullback and unless the broader story changes – look for bargains in quality names if and when that happens.

Eco data today includes only the Empire State Manufacturing Survey – exp of 13.8.  Later in the week – look for Advance Retail Sales of +0.5%, Ex autos and gas of +0.7%, Industrial Production of 1%, Capacity Util of 72.3% (again not at a level that suggests inflationary pressures at all. It would need to be > 85 to be really concerned, but anything over 80 will start to raise some eyebrows). We will also get Housing Stars of +2.8%, Philly Fed Survey of 22, Existing Homes sales of -1.4%, and the Kansas City Fed along with the usual suspects of Initial Jobless Claims and Continuing Claims.

Yesterday – 15 Asian/Pacific nations signed a major trade deal forming the world’s largest trade alliance in what some are calling a ‘much-needed lifeline’ for the region and for global trade. Technology and Auto stocks exploded higher.  The deal – named ‘The Regional Comprehensive Economic Partnership” (RCEP) is now the largest trading bloc in the world and it excludes the US.  (of course it does – It is an Asian alliance!) In other news – eco data out of Japan showed that their economy grew at 5% in the 3rdqtr or 21.4% annualized in a nod to a strong recovery as they begin to exit the pandemic. China reported that factory orders rose at 6.9% well ahead of expectations and retail sales rose at 4.3%.  By the end of the day Japan +2.05%, Hong Kong + 0.86%, China +0.97% and ASX + 1.25%.

Oil is UP, UP, UP… on the back of the Asian Trade agreement… and better eco data results across that region and now the Moderna vaccine news is only adding excitement to the recovery story that will drive demand. Oil is up 3.3% to $41.45/barrel – taking it once again above all 3 trendlines… Look for oil to test last week’s highs of $43 leaving it well within the $40/$50 range.

The S&P closed at 3585 – up 48 pts… and this morning’s news will see the S&P surge back up and thru 3600 only to test last week’s high of 3645… Depending on the tone of this conversation – which appears to be very good right now… will dictate the next move – we are in unchartered territory… and if you draw a trendline – you can make an argument for S&P 3800! (a push yes, but you can make it). Now while this is all very exciting – much of this you can also argue is priced in… so stick to the plan… do not go out and blow it all on this one event… Talk to your advisor. 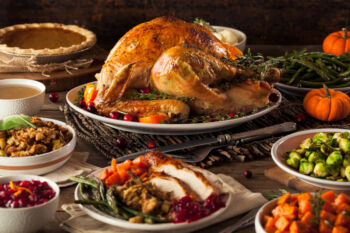 If you’re having Thanksgiving this year – try this turkey…

For this you need: The Turkey, carrots, celery, onions, butter, s&p, an apple and orange, minced garlic, sage, rosemary and thyme, chicken broth, and a splash of champagne.

Begin by rinsing and draining the “defrosted turkey” – never cook a frozen turkey. Be sure to take your turkey out of the freezer on Tuesday morning and let it sit in the fridge to defrost. By Wednesday night you should be good to go… Make sure to remove the bag with the giblets and neck from the cavity. Rinse it out and let it dry – or pat it down with paper towels. Now on Wednesday night you want to prepare it to allow it to marinate.

Mix all of your seasonings together set aside.

Place the turkey in a roasting pan.

Next, take some softened butter and massage the turkey – breast, legs and thighs. Now rub the seasonings into the turkey making sure to season all parts. Cover with foil and place back in the fridge.

Now – remove the foil and allow it to crisp up and turn golden brown. Once done, remove from oven and let it rest for 15 mins. Keep it covered to maintain the warmth.