It is all about the virus, infections, lockdowns & politics… Period, the end. The Macro data points doing nothing to drive investor sentiment or market action. While that is exhausting – it is what it is (at the moment…)

Ok, sports fans – buckle up… markets tumbled yesterday… picking up speed as morning turned to afternoon… Investors/traders and algo’s clearly focusing on the surging virus –the most recent move driven by an array of new restrictions, lockdowns, school closings (NYC schools– the largest system in the country has gone dark) and concerns about what will happen when all of these college students return home for Thanksgiving, never mind the families that plan on travelling… who will they see, what will they do? And to add insult to injury have our elected officials on both sides of the aisle even noticed what is happening in the country?

In Texas alone thousands of people sitting in cars for hours in lines that go on for miles wait for food. On Saturday alone, the North Texas Food Bank (NTFB) handed out more than 600k pounds of food for more than 25k people. Never mind all of the small businesses that have shuttered and are about to close down. And the latest headlines coming from our friends at Goldman – inform us that a second round of job cuts at their firm is only days away as the moratorium on firings during the pandemic is about to end as they look to ‘improve efficiency’ … All this while they tell us that the economy is improving and that it will come back stronger than ever… What am I missing? By the end of the day the Dow lost 345 pts, the S&P gave back 42 pts, the Nasdaq lost 98 pts and the Russell (which has been an outperformer) fell by 23 pts.

Now, while both PFE and Moderna are giving us hope – they are both still weeks if not months away from the first doses… and while investors celebrated the vaccine news – the most recent data about infections, hospitalizations and deaths was top of mind yesterday. Newly diagnosed infections growing exponentially and hospitals in parts of the country once again overwhelmed. It is these data points that continue to drive market psyche at the moment… so while it is putting pressure on stocks – it is creating opportunity in the markets for the long term investor.

Now, estimates range from 15 mil to 30 mil initial doses of the vaccine – and then someone has to decide who is in line to be the first. Cleary, front line workers and older Americans would be first in line – followed by Americans at risk then followed by the rest of us… so, the whole country is not getting vaccinated anytime soon and there is still the issue about who doesn’t want to be vaccinated… Recent polls suggest ~55% of the respondents will take the vaccine, while ~45% have no interest in being the first ones in line… Dr. Fauci – reminding us that we need at least 75% of the country to sign on if we really want to crush it.

The Trump administration is curiously silent about the latest developments around the virus while they are quite vocal about the election and that is causing a different level of angst. Toss in the refusal to allow a smooth transition and you have another issue that is causing some concern. Now while most GOP legislators confirm that while Trump has the right to challenge any state on their vote count, if it turns out to be what the country and the world have already acknowledged, then they assure us that it will be a ‘smooth’ transition. The problem right now is that the ‘smoothness’ part – should have already been happening – and Joey has made it clear that with each passing day that he does not have access to the process – the country can expect continued stress. There has been NO movement on a new stimulus plan (they don’t even discuss it anymore) and with the surging rates around the country causing a range of new restrictions – the immediate future is not bright – no matter that stocks were pricing in green shoots 6 months out.

And then we still have the Georgia Senate race uncertainty issue looming and the fight is on… Stacey Abrams and Lebron James going long on ‘getting out the vote’ across the state, while Kelly Loeffler and David Purdue defend their seats… Money is pouring into the state as each side battles and that race isn’t over until January 6th – it is only then that the country will know what’s next. So that is just another pot on the stove that is simmering on the back burner ready to boil over…

As stocks came under pressure, the VIX – which had sold off over the past couple of weeks on the idea that the sun is about to shine – is starting to rear its head again… And while it is not ringing alarm bells right now, we know how quickly that change. $26/$27 is the level to keep your eyes on – a move up and thru this level could surely see a spike in the VIX which will put pressure on stocks… so sit tight – the VIX is up 9 cts at $23.92… but the next move could be swift.

Now to be fair – this is only a phase 2 trial, and it only has 560 participants, 240 over the age of 70 – Phase 2 has found that it is safe and has produced a similar immune response in all participants ranging in age from 18 -70. Now, it did not assess vaccine efficacy – that is what the phase 3 trial does. So, while this is good news, it is incomplete – and is not really changing the tone in today’s markets

US futures are down again today… the Dow is down 100 pts, the S&P is off 9 pts, the Nasdaq is lower by 38 pts and the Russell is down 6 pts.  It does appear that we’ve hit a bit of an air pocket – but that shouldn’t surprise anyone… the move up in the past 3 weeks post the election was dramatic and not in most people’s play book – the good news about a vaccine overshadowing the short-term immediate concerns. But yesterday and today at least those short term concerns are front and center… And like we have been discussing – you should expect volatility – there is a lot going on and until we get more clarity on the range of all these issues – you shouldn’t expect it to stop. Now remember – the markets are very good at pricing in both good and bad news… but it has trouble pricing in mixed news – because it can go from positive to negative in the blink of an eye and that is why you can feel the angst persist.

Eco data today includes Initial Jobless Claims of 700k – which would be good, if it continues to trend lower, but in reality that is hard to see how that could happen considering what we all know, but let’s see. Continuing claims of 6.4 mil would also be a big improvement over last week’s read of 6.7 mil. Existing Home Sales expected to be down 1.1% which flies in the face of the most recent housing data, but what people want is NEW homes, modern designed homes, homes with offices, media rooms, gyms and outdoor space… they seem to be shying away from ‘existing home’… but let’s see. In any event – I do not expect any of the macro data today to influence the mood.

European markets are down… paying no attention to the AstraZeneca news or even the PFE or Moderna news… investors are keenly focused on lockdowns, restrictions and fears of even more to come. This morning ECB President Christine Lagarde telling us that Eurozone inflation is likely ‘to remain negative’ into the first half of 2021 as newly imposed lockdowns, restrictions wash across the continent. She also noted that unless the EU (European Union) comes up with a new stimulus plan the damage to the zone could be even bigger than current estimates. At 7 am – – the FTSE -0.80%, CAC 40 -0.73%, DAX -0.56%, EUROSTOXX -0.83%, SPAIN -0.67% and ITALY -0.22%.

Oil has halted its surge – at least for today… and by now you know why… Traders are taking the opportunity to ring the cash register after oils recent surge… WTI is up 20% since the 1st of November – much of that driven by the excitement of the vaccines and how the world was about to re-open – has now given way to heightened concerns about the toll all of these new lockdowns will take on the global economy. It has surged up and thru all 3 trendlines and is now testing support at $40.95. Sit tight… More to come

The S&P closed at 3567 down 42 pts… closing right on the lows of the day… as did the other indexes – and just so you know – that is usually not a positive sign for what may happen today… When the indexes close on the lows, it typically causes the next day to come under more pressure and we are seeing that in early pre-mkt trading… Unless there is some significantly positive news surrounding the virus, infections, lockdowns, or a smooth transition – I don’t see any reason for stocks to run away… It looks like near term support is right here at the 3550 level… and we will test that early on today unless something positive happens in the next 2 hours. If that doesn’t hold then a move to 3500 would not be a surprise. Like I said – I still think we should see some pullback and consolidation in the markets as we move into mid-December… and then early January. Sit tight and stick to the plan. Call me to discuss. 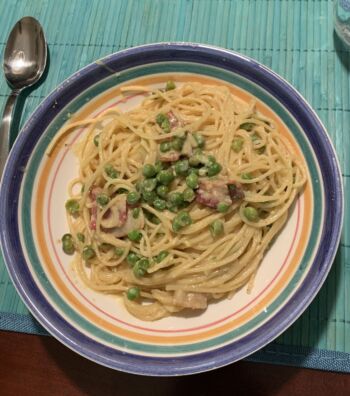 So this is the usual carbonara dish – with peas. Had it last night for dinner and thought you might enjoy. (Had to teach my younger brother…)

For this you need: 1 lb of linguine, a package of thick cut bacon (diced), bag of frozen peas, 3 eggs, fresh grated Parmegiana Cheese, one lg clove of garlic, pepper and more cheese!

Bring a pot of salted water to a rolling boil…

Beat the 3 eggs and add a handful of the cheese to the eggs directly – mix well.

While this is happening – place the diced bacon into a frying pan – no oil, no nothing. Turn up the heat. Now take your garlic clove – press it gently with the back of a knife just enough to ‘crack it open’ Do not smash it. Place in the pan with the bacon and stir.

Cook the bacon on HIGH for 5 – 8 mins… Now add the frozen peas – turn the heat to med… allowing the peas to defrost and cook – you want to keep them a bit crunchy – not mushy. Season with a bit of s&p.

Now add the pasta to the pot of water and cook for 8 mins or so… you want it aldente.

Discard the garlic. Turn off the heat. Add about ¼ of a ladle of the pasta water to the bacon and peas…

Now add the aldente spaghetti to the sauté pan. Mix well… Add the egg/cheese mixture. Toss immediately mixing the eggs with the HOT pasta. Mmmmm. If it appears to get dry – add in a bit more of the pasta water (the goal is to allow the cheese to become a bit creamy – if you need to add more to the pan – feel free!) Serve immediately with a glass of chilled white wine. Always have more cheese on the table for your guests.