****I was pleased to appear on the Investor’s Business Daily podcast yesterday… here is the link – as expected I ran out of time – so I fully expect to be invited back to finish the story!  I hope you enjoy.

Rotation, rotation, rotation… stocks opened weaker, traded lower, and then in the late afternoon went flat and then surged into the closing bell… the early morning concerns about ‘you know what’ appeared to soften in the afternoon after PFE revealed that will submit an application to the FDA for EMU (Emergency Use Authorization) for their vaccine today (not that that is new news, but it is the certainty of the fact vs. the speculation of the fact) AND that Senate Majority Leader Mitchy McConnell has agreed to restart stimulus talks with Nancy & Chucky. And both of these events were enough to lift the cloud of despair but remember – while they agreed to restart the talks, there is NO guarantee that they will get anywhere – so again markets are moving on the hope of a deal and NOT on a deal… Capisce? By the end of the day the Dow added 45 pts, the S&P’s were up 15 pts, the Nasdaq gained 103 pts and the Russell rose 15 pts.

Energy (XLE) which had been leading for the past week before it got whacked on Tuesday and Wednesday – took the lead again – rising 1.6%. Financials (XLF) which had also come under pressure during the past two days found support as well rising 0.33%. Existing Home Sales, which rose much better than expected, helped HD (+0.45%) and Basic Materials (XLB) rise 0.43%. The Bloomberg Consumer Comfort Index rose and that apparently is making consumers feel all warm and cozy, running out to buy all new stuff for their new homes – sending the Retailing ETF (XRT) surging by 2.3% (or maybe it’s a lot of holiday shopping going on). All other sectors responded as expected and ended in the green… Utilities (XLU) backed off 1% which makes sense IF the tone changes. And the VIX – which had shot higher in the morning (helping to send stocks lower) turned lower (helping to send stocks higher) at the same time that the PFE and stimulus talk news hit the tape and that also makes sense… Less fear = a move into stocks… More fear = a move out of stocks – it’s a simple concept.

Look – stocks have been antsy for weeks now and will remain so in the weeks ahead as investors/portfolio managers/traders and algo’s weigh in on all of the issues we have been discussing. Optimism about a vaccine clearly being the driver higher of late, while surging infections, hospitalizations, new restrictions and lockdowns are being the driver lower of late. The market is left to figure out which way the pendulum will swing first… will it go left and focus on the negatives or will it go right and focus on the positives while a range of states begin to impose even stricter rules? I mean CA now imposing a limited ‘stay at home’ order beginning on Saturday joins other states (IL, TX, NJ, WI, MI etc) that are doing the same. NYC is about to shutter the whole place again while many other cities impose 10 pm – 5 am curfews. Airlines are once again seeing a DROP in bookings – after what was expected to be a surge – ahead of the holiday as ‘red’ zones appear all around the country. The CDC (Center for Disease Control) also urging Americans to STAY HOME this year for the holidays as hospitals and the healthcare system becomes overwhelmed.

Now, While there is plenty of money on the sidelines that is ‘aching’ to be put to work – many investors are playing the wait and see game… as any headline right now has the ability to send the markets careening or soaring… and the bet is the path of least resistance right now is lower… which some seem to think is exactly why the markets will go higher….because everyone expects it to go lower… In fact – that can be seen in the move right after the election – all the talk of a Biden win was supposed to cause a re-pricing in the markets – and it did not…..and I credit that to the fact that the election is not over yet…..and I am not talking about the WH – that is clear…I am talking about the Senate and that is not clear (yet).  It could go in either direction and you can bet that both sides are fighting hard for the win.  So, it depends on that outcome… a Dem win will – in my opinion – cause that repricing while a GOP win will most likely cause the markets to rally…. In any event – remember- Politics will NOT price stocks in the long run, they do manage to cause short term chaos, but in the end, the markets are efficient and will adjust to the new administration and the policies/regulations that can be expected if it is a DEM sweep or if it is a divided congress with a GOP win in Georgia.

Right after the bell last night – news hit the tape that Treasury Secretary Stevey Mnuchin and Fed Chair Jay Powell got into a fight – with Stevey declining to extend a couple of the emergency lending programs initiated by the FED allowing the programs to expire on December 31st.  Futures spiked LOWER on that news… but have since calmed down… rallying back a bit but not going positive (yet). Now you can argue it two ways… the first is that Stevey is following the rule of law – in that congress’s intent was to fund it until the end of the year. But you can also argue that Stevey is making it more difficult for the incoming administration. I mean, look – this has been simmering – On Tuesday, the FED made it clear that they didn’t think it would be appropriate to ‘allow the program to expire’ and then on Thursday – the Treasury overrides the FED and says No. Now, this decision does risk unsettling the markets and it looked like that was happening last night – as it weakens (or appears to weaken) a key source of funding during times of stress. But many analysts have come out since this news hit the tape to try and calm investor fears that this is not what it appears. Ok – let’s see what happens if the markets begin to throw a temper tantrum.

US futures are mixed at 6:30 am… Dow futures point lower by 70 pts, the S&P’s down 4 pts, the Nasdaq is 10 pts while the Russell is off 2 pts. Today’s focus will now turn to the fight between Mnuchin and Powell… analysts from both sides will argue their point and it will up to investors/traders/and algo’s to figure out who is right. Clearly the Nasdaq – which is higher is suggesting that this is a non-event and that it is nothing to worry about… the Dow and the S&P which had been significantly lower overnight have also regained most of their losses – also suggesting that this is not what it seems….the market is telling you its more drama. In addition, there is new news on Gilead’s Remdesivir… and it’s a negative not a positive. Apparently the WHO (World Health Org) is rejecting use of this drug and that is causing some conversation in the scientific community… But I don’t expect this news to be a market negative at all, it will affect GILD, but considering the PFE and Moderna news – this Gilead news is not a game changer, never mind that many scientists are debunking the WHO thesis anyway.

The BREAKING NEWS in PFE this morning – which is nothing more than the clarification that they DID submit the application to the FDA is now being talked about….but it comes across the screen with a bit RED banner – with BREAKING NEWS written in all caps… as if this is really BREAKING NEWS… it isn’t… but it is a way to try and divert the conversation from the negative Treasury/FED story onto a positive covid/vaccine story.

European markets are all higher by about 0.5% across the board. Europeans are not paying much attention to the Stevey/Jay drama but would rather talk about the potential new stimulus talks between the GOP/DEMS. In person BREXIT talks have been suspended after the covid 19 virus spread across a team of negotiators, but both sides are trying to do this remotely in the hopes of coming to a deal by the end of the month.  At 7 am – – the FTSE +0.5%, CAC 40 +0.52%, DAX +0.56%, EUROSTOXX +0.57%, SPAIN +0.67% and ITALY +0.84%.

Oil is up 26 cts at $42/barrel… remaining above all trendlines. The idea that a vaccine is coming and that OPEC will control production is the story. Concerns over lockdowns and restrictions while a concern are not causing markets to convulse. We remain in the $40/$50 range wth $45 being the next level of resistance.

The S&P closed at 3581 up $14 pts… Yesterday I thought that we would find support at the 3550 level… we found it at 3543… Ok – so I missed it by 7 pts… If the tone holds for the day… I suspect that 3550 holds and that 3600 will be resistance. There is no other data today other than the FED story and the Stimulus story… It is Friday, the weekend is here and next week will be interesting as it is Thanksgiving week – a time when the country is usually on the move… this year – not so much… so let’s see what happens next. 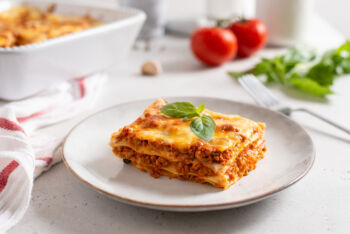 A first course for Thanksgiving…

Now – If you grew up in an Italian family – you know that you always serve Lasagna on thanksgiving… So here we go.

For this you need – the ‘oven ready’ Barilla lasagna sheets – so easy to work with and you don’t have to make a mess and boil them first etc. Fresh Ricotta, shredded mozz and Fresh Grated Pecorino Romano, the classic meat sauce and the meatballs.

Begin by removing 6 meatballs from the sauce – and put them in a large bowl.  Now with a fork – smash the meatballs, Add in 3 spoonfuls of fresh made ricotta cheese, a ladle of tomato sauce and a handful of shredded mozz. Mix well.

For the final layer (4 layers are usually enough): Lay the sheets in the opposite direction of the layer below.  Now top with some tomato sauce and shredded mozz.  Here you can also sprinkle some fresh grated pecorino Romano.   Cover with tin foil and place in the oven to bake at 375 degrees for 25 mins.  Remove the tin foil and bake for another 5 – 8 mins just so it browns a bit.  Remove and let sit for 10 mins before cutting and serving.