Has Santa Already Come or Is He on His Way? Try the Linguine in Lobster Sauce 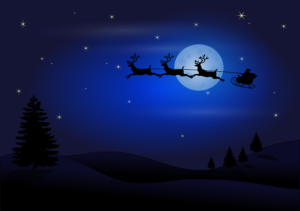 Good morning America, Good afternoon Europe and Good night Asia… global markets continue to churn and thrash around as the year comes to a close… Monday’s weakness, turned into Tuesday’s strength – with the S&P and Nasdaq notching new highs as the closing bell rang… the Dow took back 185 pts, the S&P added 41 pts, the Nasdaq gained 156 pts and the Russell advanced by 16 pts… The news? Nothing more than what we already know… and that – I am assuming – will be the story for the next 4 weeks as the world looks to celebrate the holiday season and ring the bell on 2020 while welcoming a new year, a new world and a new way of living, learning, working and even investing…

Expect the conversation to revolve around the pace and distribution of a vaccine here and around the world, then expect more talk about the lame duck presidency of Donald Trump and the final orders/pardons/issues that he is sure to create on his way out the door, expect to hear what the new President Elect Biden has in store for members of his cabinet and administration, his plans for the country, his plans for controlling the virus, regulation, taxes and trade policy,  and then expect to hear more about some form of additional stimulus for those most impacted by the latest gov’t  shutdowns across the country… think – LA, Chicago, NYC, NJ, WI etc. In fact – Joey told us in a press conference yesterday any stimulus package passed during a ‘lame duck Presidency’ would only be a start… which would leave you to believe that he has plans for even more once he moves into 1600 Pennsylvania Avenue on January 20th.

With that in mind – there should be no reason to dramatically change your plan or your investment thesis – just yet… Remember – Joey and Mitch McConnell have spent more than 40 years in the Senate – so the markets and the country are hopeful that they will both play nice in the sandbox and work together to move policy forward.  We’ll see…

In any event – it is December… and Santa Claus is alive and well…history shows us that December is usually an UP month… for a number of reasons… and Tom Lee of Fundstrat & CNBC fame (along with many others) tell us that this December should be no different… He expects the markets to advance ANOTHER 3% from here! (And just fyi – He’s pretty good… in fact – he’s very good at market intelligence). In any event – the message? Don’t fight the FED, don’t fight the tape and the path of least resistance at the moment is UP… (key words: At the moment)

Now look! I’m not telling you what to do – but I am telling you that considering what we have been through this year – the markets (around the world) have not collapsed (and we can surely thank the FED and many other central banks)– which says a lot. I’m also not telling you that the market isn’t overbought – because by so many measures it is… so what I am telling you is that you should not get drawn into the fray without understanding your own ‘risk’ metrics. Understand that bull markets get to a point where exhaustion sets in, the same way that bear markets get to a point where opportunity sets in… which is why – as a long-term investor – you should not be playing that ‘time the market’ game. You need to have a plan and then stick to it.

Your portfolio should reflect who you are – and your conversation with your advisor should be an ongoing one… investing is not static by any stretch of the imagination. It should be and remain dynamic – because as the world changes so do stocks…

Cyclicals, Financials, Energy & Small/Mid Cap, both US & International’s, Value are all sectors that are projected to perform well as the world recovers. In fact – the Russell (small cap./mid cap) has surged of late (in anticipation) and is now up 11% ytd… after struggling for much of the year, and Value while still negative on the year is expected to lift its head. Now that does not mean that Tech or the other strong performers are doomed…not at all, but what it does mean is that the new year will most likely bring new ideas and with that new opportunities.

This morning we learn that – Asian markets ended the day mixed, European markets are off to slightly weaker start and US futures are pointing lower…. the vaccine news continues to dominate the headlines. The UK now the first country to approve and begin to disseminate/administer the PFE/BioNTech vaccine… plans for a rollout now in full speed mode… Aged and most at risk are first in line – as they should be and then the early indications are that it will pass thru the country in 5 year age increments… starting high and moving lower… as more and more supply comes to market… conversations about how the US will distribute a vaccine is next in line… many now suggesting that it will be state by state vs. a federal mandate… which is sure to cause unrest and concern among many, but it is what it is and we have to start somewhere – and as far as I’m concerned we should protect the aged and the ‘most at risk’ and move on from there. While this is happening – the rest of us can continue to live our lives by adhering to the latest CDC guidelines etc. I mean – use your head for something other than a hat rack!

US futures are down – at 7 am – the Dow is down 140 pts, the S&P -8 pts, the Nasdaq is -25 pts and the Russell is -6 pts… Treasury Secretary Mnuchin and Fed Chair Powell are expected to once again appear before congress to detail what they think should be the next move… Mnuchin wanting a smaller more targeted plan, while Powell just WANTS a plan! And not to be outdone – newly nominated Treasury Secretary Yellen – wasted no time chiming in – suggesting that we need a big plan that is focused directly on those MOST affected – (Did you expect her to say that we need to help those not affected?)

Yesterday’s eco data was strong… which is what also helped the mood… today’s eco data includes ADP Employment Report – exp of 430K new jobs created – and this is in line with what we are expecting Friday’s NFP (Non-Farm Payroll) report to show. Expectations for that report are for us to have created 486K new jobs… in any event – we are not expected to see the huge jumps that we have seen in the past 3 or 4 months… Unemployment is expected to go to 6.8% down from 6.9%. Mortgage apps this morning apparently rose by 9% – confirming the story that the housing remains a HOT sector…

Oil is under a bit of pressure – down 17 cts at $44.38/barrel… the API (American Petroleum Institute) reporting that crude inventories rose by 4 mill barrels vs. the expected draw down of 2.4 mil barrels and OPEC+ has postponed any discussion of output policy until tomorrow. Today we will get the IEA (Int’l Energy Admin) reports on the state of oil inventories as well. We remain well above support at $41.50… and will most likely remain in the $40/$50 range.

The S&P closed at 3662 yesterday – after trading as high as 3678! This morning it appears that at least around the opening… the markets will pull back and churn. Investors are excited about what 2021 will bring for the markets and for earnings and eco data… all analysis suggests that there are better days ahead and for the long term investor – taking advantage of any pullback would be advisable… Remember – many analysts are suggesting that December will see a surge into year-end… Again – in my opinion – Santa has already come… it would not surprise me to see the markets churn into year-end… And that is what makes a market – diversity of thought!

Ok – it’s December and for those of you who know me – Christmas Eve is my favorite night of the year… and in an Italian household it is the night of the 7 fishes – known as ‘La Viglia’.

Every year in the U.S and around the world, many people celebrate the Feast of the Seven Fishes on Christmas Eve… The ancient tradition of eating fish on Christmas Eve dates from the Roman Catholic custom of abstinence from meat and dairy products on the eve of Christmas. And so you ask – Why 7?  Great question – to which there is no one answer.  There are several religious theories to explain it – there are 7 sacraments in the Roman Catholic church; 7 is the number that appears most frequently in the Bible, or is the most significant (it took 7 days to create the earth, there are 7 deadly sins, the number 7 represents perfection). No matter the reason – I am about to give you the 7 different dishes that we prepare on Christmas eve. I hope you enjoy… 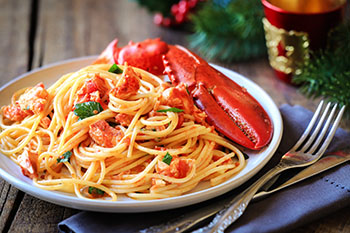 No. 1 Linguine in Lobster Sauce

At this point add 3 cans of kitchen ready crushed tomatoes – NOT PUREE – if you can’t get kitchen ready crushed – then buy the plum tomatoes in juice and run them thru the blender or food processor – leaving a bit chunky… Bring to a boil – season with s&p, and fresh basil – stir.  Once it boils – turn heat down to med low and prepare to add the lobsters.

First rule – Always use live lobsters. (Should be like 1 1/2 pounders each). Rinse under cold water – Once you rinse him/her… remove the rubber bands and put in sauce claws/face first…now he/she may flap its tail – but that is only for a second or two… Add second lobster.  Stir and make sure that the lobsters are submerged in the sauce and turn heat to simmer… allow to cook for about 30/45 mins. Now if you are making this the day before – remove from heat, let cool and then refrigerate. The next day – take out of fridge and let come up to room temp and then slowly re-heat on simmer… You can just smell the goodness and feel the ocean waves hitting you in the face…

Bring a pot of salted water to a boil – add the linguine and cook for 8 / 10 mins or until aldente. Strain – always saving a mugful of pasta water – and return to pot. Add back about 1/4 of the water and stir to re-moisten… do not soak… capisce? Now add 3 ladles of sauce and toss… Serve immediately – making sure that you have grated Pecorino Romano cheese on the table for your guests.  If you like – you can remove the tail/claw meat – shred and add to sauce or you can just present it on a plate for your guests to enjoy…