Stocks settled lower on Friday as the stimulus package negotiations were pushed to the weekend… investors showing their distaste for how congress has handled this process causing more angst and pressure on the markets… in addition – a new covid 19 strain beginning to appear is causing renewed concerns as the UK gets hit hard. Travel throughout Europe now being driven by these new concerns. Flights into and out of the UK being cancelled as Europe attempts to stop the spread of the latest turn of events. France, Germany, Italy, Ireland, the Netherlands, Canada and Israel have all blocked flights and travel from the UK. Failed BREXIT negotiations also weighing on the overall tone for European markets.

Quadruple witching and the addition of TESLA into the S&P Index created all of the action on Friday – which only happened in the final minutes of trade – as the expiration of stocks and futures get settled and the push into TESLA for the hundreds of index funds that use the S&P as their benchmark caused a huge spike in volumes and a surge to new highs for TESLA (and Lonnie Musk). There were no eco data points to preview so it was all about the stimulus negotiations (which disappointed), the virus and vaccine and the overall angst going into year end. By the end of the day the Dow gave up 124 pts, the S&P lost 13 pts, the Nasdaq gave back 9 pts and the Russell lost 8 pts.

The weekend came and congress continued to negotiate – sending different elected officials out of the negotiating room throughout the day to test the water or float the balloons – leaking info about what was going on, where they were, what were the remaining stumbling blocks, who was in and who was out… making it all very dramatic as they pledged to have a deal before the markets opened for Monday trade. And guess what – At about 6 pm EST (think 11th hour)  – last evening – the headlines hits the tape – Congress had come to a $900 billion agreement – just in time for the Asian markets to react… US futures surged (think the supposed ‘smart logic algos’) … jumping 300 pts before the ink was even dry… you could feel a sense of relief that they finally did something and that relief was on the way… No need to detail it because you already know what it is… Liability protections continue to be a thorn in their side – as the legal industry lobbies the Democrats hard to make sure that no employer is protected against ‘frivolous lawsuits’ that threaten the very lifeblood of our economy. You can see how the lawyers are already lining up ready to file lawsuits on behalf of ‘their clients’ trying to make employers and insurance companies somehow responsible for the once in a century pandemic crisis. I mean look – someone has to pay… why not business?

In any event – while the bill was agreed to – it is NOT finalized yet – oh no – it needs to be ‘worked out’, congress needs to ‘write the language’ so there are no misunderstandings… so it ain’t over yet… Mitchy McConnell taking to the podium announcing a ‘major bi-partisan breakthrough’ as each side claimed the ‘win’. Chucky Schumer telling us that this is ‘only the beginning’ that when Joey takes over and Georgia goes to the Dems – the country can expect an even bigger bill… In any event – this deal is NOT making markets celebrate, and that should not really be a surprise at all… right? The market celebrated in anticipation of it happening… Do you recall the rally of the past 6 weeks (the S&P +13% and the Nasdaq +16%) and the Thursday surge to new highs ahead of what was expected and after Fed Chair Jay Powell told us that stocks were not mispriced or that they were not expensive vis a vis where interest rates were? Hmmmm – Well if you forgot, let me remind you…. stocks rallied hard on Thursday – allowing the 3 major indexes to all notch new intra-day and closing highs… and then on Friday – we saw some profit taking as the weekend approached, negotiations got pushed out, the country almost ran out of money and the trader types took money off the table after the push higher… and then – as I have been saying and said again in Friday’s note I said –

And this morning the pullback is happening… US futures getting hit hard – at 6 am the Dow is pointing down almost 700 pts, or -2.3%, the S&P off by 80 pts or 2.2%, the Nasdaq giving up 200 pts or 1.5% and the Russell down by 63 pts… or 3.1%! (At 7:30 we have seen a small rebound but futures still pointing lower) – what we are seeing is that in fact investors/traders and algo’s think it was a bit ‘overdone’. (and yes, the new strain is not helping) – but in reality – say it for what it is – the markets had gotten ahead of themselves – it’s that simple, so if you are surprised by the pullback then you’ve been living under a rock – it just needed to find a new reason… I suspect that as talk of this new strain permeates the conversation – investors/traders and algos will choose to be a bit ‘Risk Off’ – until they get more clarity on it. And more clarity on the stimulus plan and more clarity on the Georgia Senate race only two weeks away… and while both Loeffler and Perdue are holding slight leads – that too could ‘suddenly’ change in the days ahead.  And don’t kid yourself… because this does have and will have an impact on valuations – especially in Financials, Tech, Energy and Healthcare.

Asian markets ended mixed – Japan -0.18%, Hong Kong -0.7%, ASX -0.08% while China gained 0.9%. The PBoC (People’s Bank of China) left lending rates alone (not unexpected) while new cases of covid are spiking in Sydney, Australia – with surrounding states banning travel to and from the most populated city in all of Oz… and this is causing new concerns for that region of the world.

This morning in Europe – stocks are spiraling out of control… with all of the major market centers down more than 3% across the board… No one over there cares about what congress did on Sunday in the 11th hour (how quick the tone changes…)  … the focus is now on this new fast spreading strain of the virus that is causing all of Europe to shut their borders and not allow any travel between Europe and the UK – as this new strain invades the British Kingdom… shutting much of the country down. (Italy and France suspect that the new strain may already be in their countries, Australia and the Netherlands have already identified it in their countries so expect to hear more about this today… and then it is only a matter of time before someone here in the US shows up with it as well.)  The benefit? (if there is one) is that the scientists believe that the current set of therapeutics and vaccines from both PFE and Moderna will protect people from this strain – so there should not be any new reason to panic… while it may be fast spreading, it is supposedly no more dangerous, but we will need to hear from the talking heads. At 7 am – the FTSE -2.14%, CAC 40 -2.66%, DAX -2.68%, EUROSTOXX -2.80%, SPAIN -3.15% and ITALY -2.78%.

Eco data today – nothing… tomorrow brings 3Q GDP finalized at 33.1%, Existing Home Sales of -2.2%, (again this is a disconnect as housing outside of big cities is surging… so this will be an interesting report),

Recall that this is a holiday shortened week. Thursday is ½ day and Friday markets around the world will be closed for Christmas – so we could see some volatility as we move through the week.

Early voting has now begun in the Georgia Senate Race – and the heat IS on… Perdue and Loeffler while ahead are within the margin of ‘error’…. so anything can happen… sit tight.

Gold is off small – trading at $1,884 while Bitcoin is down 353 pts at $22,570 after having risen $1500 piercing $24k. Lonnie Musk making headlines wanting to covert ‘large transactions of Tesla’s balance sheet into Bitcoin – and this is sending Bitcoin junkies into a frenzy… Expect Mikey Novogratz and all of the other Billionaires that have jumped onto that wagon to all stand up and push hard… as they ‘talk their own books higher…”

Oil is under pressure – down 4% or $1.97/barrel at $47.13.   – the headlines today? The new strain of surging Covid 19 cases suddenly stoking demand concerns! Again – Please stop already… investors and the markets not only need to digest the recent surge higher and they now need to digest the recent news about this new strain – a strain that does not seem to be concerning to the scientific community. Again – we remain in the $40/$50 range and I suspect that it will find support at that $45 level.

The S&P closed at 3709 – down 13 pts on Friday. Futures are now down 62 pts which would bring us to 3640 ish… levels last seen on December 15th… only last week. And while this move does not surprise me – I am not suggesting that this is the beginning of the end… but a 5 – 7% pullback should not surprise you at all… In fact, a 5% pullback brings us to the 50 dma or trendline support. A 7 % pullback would bring us right to the 100 dma or intermediate trendline support. Depending on how the headlines unfold will dictate the short term move in stock prices… new even stricter lockdowns in Europe will most certainly lead to stricter lockdowns in the US, when we find out who the first person is that has the latest strain of covid-19.

In any event – stocks are pricey… just look at what has happened in the past month… so of course stocks will be vulnerable to headlines that suggest uncertainty again… so buying them down 5 or 10% from here should not be bad thing IF you are bullish in the long term (which I am!). Remember – a pullback can be swift and painful for those paying top prices right now. In any event – I would not be chasing stocks… peeling some off (some means just that – some not all) and putting the cash aside may be more appropriate right now… this way you have to re-invest when the pullback happens. If not – then hold on… 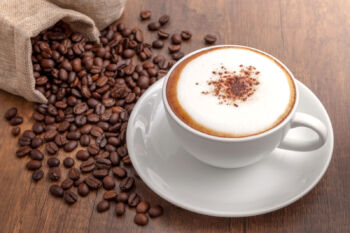 One more great and simple desert for the holidays – If it take you longer than 1 min – you did something wrong!

This is a combination of Ricotta cheese, rum and espresso coffee… (who remembers Medaglia d’Oro Espresso?)

Get out the food processor (or blender) – add the ingredients. Blend until you have a nice creamy consistency.

Pour the mixture into individual glasses or small desert cups/bowls. You can use white wine glasses for a more dramatic effect. Place in the fridge and allow to cool overnight. After your dinner party – remove from the fridge – adorn with fresh coffee beans and serve.