Mutant Strains, But No Overreaction – Try the Candied Pecans

Good morning America, Good afternoon Europe and Good evening Asia – What a difference a day makes! US futures are holding steady this morning not suggesting any sense of unease or panic over the latest mutant version of Covid-19. Flashback to yesterday morning – when the news out of Europe – more specifically from the UK – about a new mutant variation of Covid-19 hitting the countryside sent European stocks careening and US futures lower in pre-mkt trading.

European countries banning travel to and from the UK and NY’s governor Andy Cuomo blasting the Trump administration for ‘not implementing a shutdown’ and banning flights from the UK in response to this fast spreading, more infectious strain. Markets were on edge as word spread about its 70% transmission rate, while others questioned whether or not it was more deadly and if the current slate of vaccines would now work. All of this as DC tried to calm the markets – while basking in the glow of the 11th hour deal struck on Sunday night (about a corona virus relief package) but this did little to stop the bleed in the pre-mkt… the headlines causing renewed concerns that this new strain may present a new dilemma and so – as we witnessed – European markets fell by more than 3% in late morning trading – US futures were reacting to the news.  Commentary about a new global shutdown causing the algo’s to hit the SELL button… And let’s be clear as well – the market was looking for a reason to shake the branches a bit, after the most recent surge higher… and this news was just what the Dr. ordered. I mean at 5 am – US futures were down nearly 700 pts as the headlines swept across the media outlets. The ‘panic’ only exaggerated by the swift response of the algo’s and the lack of asset manager participation in the early morning hours…

In any event – many asset managers/investors/traders did not over react at all… in fact – futures started to rebound even before the opening bell rang… and while still lower – early trading suggested that maybe it was not the panic situation that the early action was suggesting… Scientists and Drs taking to the airwaves trying to calm the fears, explaining that the PFE/BioNTech and Moderna vaccines were capable of dealing with this new strain… and as that conversation settled in – the market recovered. The Dow going positive ending the day up 37 pts while the S&P, the Nasdaq lost 14 pts and 13 pts respectively with the Russell ending the day flat… and THAT was a WIN considering how the European markets ended and what many suspected was going to happen here.

And then we had the stimulus package – which helped once people started to pay attention to what was coming out of DC… word that an agreement was in place seemed to settle the markets while we waited for a ‘clean version’ and a definitive vote – and last night – after the close -we got that.  Now while not perfect – Chucky Schumer reminds us that when the Dems win Georgia and Joey moves into the White House – we can expect an even bigger, more impactful stimulus plan… and that my friends is something the market is not yet paying enough attention to… because a Democratic win in Georgia will change the tone completely in DC and at the moment I do not believe investors are pricing in that risk… Now – as I pointed out yesterday – the polls do show both Republicans ahead, but the margins are within what is known as the ‘margin of error’ meaning – this election could go either way… and that is and will be the next pothole for investors to consider… Now again – it doesn’t mean the markets will crash, but it does mean that the markets will re-price based on what is expected to be a broad range of new regulations and taxes.

All sectors lower yesterday except the financials after the FED gave them permission to ‘return value to shareholders’ (think buybacks…) – Immediately JPM +4% announced a $30 billion buyback program while MS +5.5% announced a $10 million program.  GS rose 6% BK + 5.6%, C +3.6%, and they didn’t’ even announce anything yet… so you can feel the investor pleasure…

Tesla – which was added into the S&P index as of the close on Friday evening surged by $50 in the last trade of the day on Friday – to accommodate all of the buying by the multitude of index funds that needed to own it… and then yesterday gave it all back as the buying abated – ending the day down $45 or 6.5% – helping to put pressure on the S&P.  Now do not discount the latest Apple news that hit the tape yesterday as well… Apparently, Timmy is building an ‘electric iCar’ that will be available in the spring of 2024 – Now Apple began to think about this back in 2014 under a code name ‘Project Titan’ – and yesterday we learned that not only will it be a self-driving passenger vehicle but that it will also use ‘new’ battery technology that will slash the cost of the batteries while at the same time increasing the vehicle’s range… and this was enough to start a new conversation about the role that Tesla will play going forward….now – to be fair – no one is counting Lonnie out just yet, but the news was enough to cause the trader types to take advantage of the action… Tesla ended the day down 6.5% while Apple rose 1.25%.

And btw – all of this electric vehicle talk is not without its downside as well… Do any of the environmentalists realize that the boom in mining ‘rare earths’ (think cobalt used in all of these batteries that power everything from cars to computers) poses mounting toxic risks? China is the biggest miner of rare earths and they are causing all kinds of increasing significant environmental problems. In fact – 50 yrs of mining and processing rare earths has ‘severely damaged vegetation, causing pollution and acidification of Mother Earth, while also producing wastewater with a ‘high concentration of radioactive materials. But that’s another story… Someone should make that our new Transportation Secretary – Petey Buttigieg knows this.

This morning – US futures are churning… The Dow down 25 pts while the S&P is up 3 pts, the Nasdaq is up 42 pts and the Russell is up 2 pts. There is nothing new today… it’s about the virus, the vaccine and the stimulus plan.  Volumes will begin to wain in today, tomorrow and Thursday… as markets around the world observe the Christmas holiday on Friday… and word that the Santa rally takes place in the last week of December/Frist week of January is a bit misleading… Santa has already come…the highs for this year are in.

European markets are in rally mode – taking back many of the losses suffered in yesterday’s trading… UK GDP rose by 16% in the 3rd qtr – which is good but did not fully recover from the 18.8%n loss in the 2nd qtr… and now with the UK shutdown again as this latest wave washing across the country – many analysts are raising concerns that the 4th qtr will get slammed again. The mutant version of the virus is now appearing in Italy, the Netherlands, Belgium, Demark and Australia… and surely it is here in the states as well, no one has yet said or identified a carrier… but my guess is that we will find out before Friday… India, Russia, Hong Kong, Jordan, all suspending travel to and from the UK while Saudi Arabia, Kuwait and Oman – have closed their borders completely to everyone. BREXIT remains an issue with the UK and the EU remaining at odds over a number of issues with British PM BoJo preparing the country for an exit without a trade deal. At 7 am – the FTSE +0.28%, CAC 40 +0.95%, DAX +1.07%, EUROSTOXX +1%, SPAIN +1.02% and ITALY +0.92%.

Gold is off $6 – trading at $1,877 as trader types take money off the table after the stimulus plan passed… look for gold to find support in the $1850 range… while Bitcoin is trading above $23,000 this morning…

The S&P closed at 3694– after trading as low as 3636 yesterday… and this morning it appears as if we want to try and take back 3700.  My sense it will, but it will also run into enough supply to keep the lid on it…. I still think we could see a 7% – 10% pullback in the new year… if the GOP loses… If they win – then I suspect that the markets will celebrate a divided gov’t (because it keeps both side honest – if that’s even possible) while still testing a bit lower initially – think a 5% move in the broader market… with some of the highflyers getting hit a bit harder.

In any event – stocks are pricey… just look at what has happened in the past month… so of course stocks will be vulnerable to headlines that suggest uncertainty again… Remember – a pullback can be swift while a surge can be swift as well… In any event – I would not be chasing stocks here (as I expect a pullback)… peeling some off (some means just that – some not all) and putting the cash aside may be more appropriate right now… this way you have to re-invest when the pullback happens. 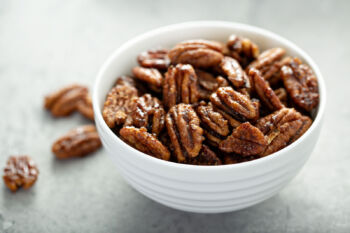 Here is a quick and easy holiday recipe that I got from my friend Scott. It works well as a gift or just to have on your table.

Candied Pecans – You can use them on a range of dishes, breakfast cereals, salads, desserts.

Lightly whip the egg whites, add sugar and cinnamon and pecans and blend. Pour the melted butter on the baking sheet, spread the pecan mix on top and spread out. Bake about 30 minutes turning every 10 minutes at 350 degrees.