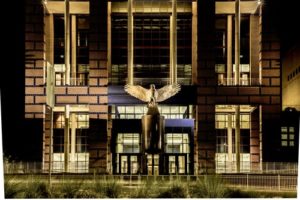 As detailed yesterday, there wasn’t any economic news to drive the action, but there was lots of talk of rising rates and the Biden fiscal plan – which we will hear about tomorrow, leaving investors/traders to digest the most recent moves all while we await the latest political news.

Value stocks rose 0.4% once again outperforming Growth names which fell by 0.4%… 10 yr Treasury yields continue to push higher ending the day at 1.18% – a level not seen since March and this is starting to cause investors to have the next conversation about what level the 10 year has to get to that will kick off a correction in stocks? Recall, yesterday we asked – will it be 1.3%, 1.5%, 2%??? Answers varied and as you can imagine – everyone has an opinion! The common answer though, was it depends on how fast those rates rise…

As rates rise – investors will find ‘safety’ in pro-cyclical names – think Financials, Energy, Consumer Discretionary, Retail, Industrials and Basic Materials – all sectors that did well yesterday… XLF + 1.03%, XLE +3.5% and XLY +1.5%, XRT + 3.1%, XLI +1% and XHB +1.6%. Tech – XLE – fell 0.5% which you might expect as rising rates and talk of ‘more’ rising rates puts pressure on growth names – but be careful, because, I am not saying that anyone abandon tech (growth) at all, I’m just saying beware of the tone. Once again TECH is not defined by 5 stocks (think FAANG) – there are so many other ways to play the space… think Cyber security names, IoT (Internet of Things) names, Fintech names, Enterprise Software, Cloud computing, AI  all parts of Tech that may be a bit more ‘immune’ from the swings vs. AMZN, GOOG, AAPL, FB, NFLX… In the end – expect Tech to participate with the broader market versus lead the broader market – in the way it has for the past 2 years. Utes, Communications and Consumer Staples also backed off as is expected in a rising rate environment… XLU -0.5%, XLC – 1.6% and XLP – 0.3%. Remember – rates are set to rise and that should cause stocks to reprice a bit to reflect the environment – what you need to be aware of is when and where will the FED jump in to ‘control’ it.

Friday starts the quarterly beauty pageant – otherwise known as earnings season… and so expect the focus to move from the ‘noise’ to earnings… as investors begin the quarterly exercise of examining the results of US companies… and there is an expectation for earnings to be good, in fact much better than last year and that is what has been priced into the market ahead of the reports – which is the risk that is not being discussed, because if earnings disappoint at all, expect the stock and maybe the broader market to retreat. Look – just think about all of the stimulus in the last year alone… and of all the new stimulus that is about to be announced in terms of future guidance. It is interesting that Biden is set to announce his stimulus plan tomorrow that is being defined as in the ‘trillions’ just ahead of the season. Think of what that could mean for the Industrials, Infrastructure and Construction industries. Will this plan give CEO’s and CFO’s more confidence in trying to predict the future? Remember – last year – it became very difficult for companies to offer any guidance – and it got worse for the 2nd and 3rd qtr reporting season, so what are we to expect now? Investors are tiring of companies using Covid as a shield to give them wiggle room and they expect to hear more definitive projections… so, let’s just see what that looks like. Companies set to report on Friday are JPM, C, PNC, WFC, and SCHW… and I do not expect anyone of them to disappoint (if I had to pick one that might disappoint, I would say WFC and if I had to pick a winner – I’m going with Jamie Dimon and JPM). But look – guidance and earnings have been ‘adjusted’ and the bar is low… so anyone that can’t jump over a low bar is in real trouble!

This morning – TGT which is up 28% since the beginning of the 4th qtr, announced that sales rose 17% for the holiday period suggesting that consumers were and are alive and well… but this should not be a surprise at all, the industry has been telling us for weeks now how well retailers did… earnings are not due for another 2 weeks, but many are expecting them and the industry to report ‘blowout’ numbers… the only concern here is – is the action a ‘Buy the Rumor/Sell the News’ type of event? Oh, it’s a tangled web we weave…

This morning the talk is all about the 2nd impeachment process that appears to be gaining speed in DC. Mikey Pence has made it clear that he is not invoking the 25th amendment so that leaves Nancy and Chucky to initiate the process… Members of the GOP are beginning to see the light and jumping the fence… Expect the vote to happen today in the House and be moved to the Senate… what Mitch does then will be anyone’s guess… with only 7 days to go to the new administration – many are wondering why waste the time…? And that answer is because if they impeach him, he will lose many of the benefits that a ‘former’ President enjoys, but more importantly, it will disqualify him from running for office again – and that is the goal now. Trump2024 will be nothing but a distant memory… unless of course it is ‘iTrump2024’… (think Ivanka). Word is that she is moving to Miami – putting ‘little Marco’ on notice! – the same way Hillary did when she moved to NY. It’s exhausting!

US futures are a bit lower this morning… Dow futures off 25 pts, the S&P’s off 7, the Nasdaq down 18 and the Russell off 2. The story is the same, the virus, the vaccine, the drama in DC and the potential impact of rising rates… so investors are taking it all in stride while much of this plays out…

Economic data today includes: CPI – which is expected to be +0.4%, ex food and energy of +0.1% – this is an important data point today… because it speaks to the Consumer Price Index – a measure of inflation which could drive the 10 year higher…and if the 10 yr goes higher then expect stocks to come under pressure… some more than others!

Investors are also awaiting tomorrows big Biden announcement… his ‘trillions’ in stimulus is expected to include more stimulus checks, extended unemployment benefits, more money for healthcare, more money for vaccines and disbursements, more money for infrastructure in fact just MORE MONEY for so many while imposing higher taxes to pay for it… And this will be the tailwind for 2021… as it sets the stage for more economic growth in the 2nd half of the year which should take stock to new highs… (suggesting that the first half of the year may see stocks retreat a bit and build the next base from which to launch.)

OIL is UP by 11cts at $53.33 after yesterday’s surge as well. The API (American Petroleum Institute) reported a drop in inventories and that coupled with the news that the Saudi’s are cutting production again further supports a rally in prices… Investors shrugging off the latest chatter of a surging virus in a move that appears to suggest that everyone is tiring of this story and with the vaccine more and more available – many are looking for better days ahead. And better days ahead suggests that demand for energy will surge. We are approaching the February highs and expect to find some resistance. We remain in the $45/$55 range.

The S&P closed at 3801 – doing not much yesterday as investors take it all in… and wait patiently to see what happens in DC as well as what happens when earnings season begins… Now unless something really terrible happens in DC or in the country – then I don’t expect the markets to react… I mean look – they didn’t blink last Thursday after the events of Wednesday… so I suspect that they won’t blink now… and in the end – political unrest does not price stocks in the long term. I still expect the rally to fade and pullback a bit… I do not expect it to ‘correct’ by any big margin – think 10% at all… But anywhere between a 5 – 7 % pullback would not be odd… in fact would be welcomed by many. So stick to the plan, create a well balance and defined portfolio… trim and rebalance where necessary, call your advisor and focus forward… 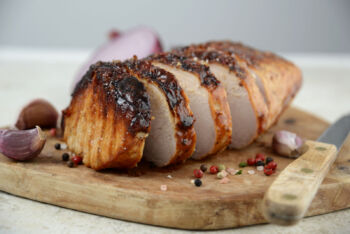 Frist – grate 1 tsp of lemon zest. Then cut the lemon in half and set aside.

Combine the zest, olive oil, chopped garlic, and pepper flakes and place in a nonstick skillet. Cook over med low heat for about 4 mins.  Add the Rosemary and sauté for another min or so. Now strain the mixture thru a fine mesh strainer set on top of a bowl. Making sure to push on the garlic and rosemary to extract all of the oil.  Set the oil aside and set the garlic and rosemary aside separately.

Now – run the pancetta thru the food processor until it becomes a smooth paste. Add the rosemary and garlic mixture and mix until smooth.

Now – the fun part. Open it up, make sure the fat side is on the outside of the pork when you roll it. Pound it out to make it even. Sprinkle with the kosher salt and massage it in. Now spread the pancetta, rosemary paste all over the inside and then carefully roll it and tie with cooking twine every inch. Now – place on a plate and refrigerate for one hour.

Preheat oven to 275 degrees – and place roast in center rack and cook until it registers 135 degrees – should be about 1 ¾ hrs. Remove and tent with tin foil.

In a skillet heat up some more olive oil and add the lemon halves -cut side down and cook until browned -about 4 mins… Remove the lemons and set aside the oil.

Now heat up a bit more olive oil and add the pork loin – browning on all sides. – should be 5 mins… transfer to cutting board and remove the twine.

Once the lemon halves have cooled – squeeze the juice out of them… And mix with the oil used for browning the lemons… Whisk well. Now slice the roast into ¼ inch piece and serve with a medley of veggies… (you call here, whatever you like) and pass the lemon vinaigrette separately.