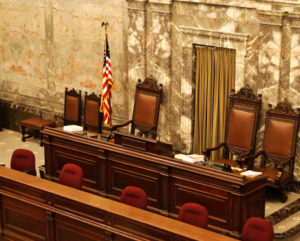 Stocks continued to take a break even as investors/traders remain optimistic with the broader market represented by the S&P 500 closing slightly higher, +8 pts in contrast to the Dow 30 which closed slightly lower -8 pts. The Nasdaq rallied by 56 pts as some of the tech shares found buyers after their recent weakness and the Russell fell 16 pts but remember – this index has outperformed beautifully over the past 3 months surging some 41% off the October lows with value names outperforming growth – so you have to expect it to churn a bit. Value continues to do well – The SPYV (value ETF) is up 21% off the October lows while the SPYG (growth ETF) is up 15%. CPI data came in as expected at +0.4%, Ex food and energy of +0.1%.

10 Year Treasuries – which have been all the focus of late backed off a bit falling 5 bps to end the day at 1.092% – after not one but two fed officials – Vice Chair Richie Clarida and St Louis President Jimmy Bullard assured us that easy monetary policy will remain in place for the ‘foreseeable future’… Now you decide…

Clarida saying that the central bank won’t raise rates ‘until inflation reaches 2%’ (which by the way may NOT be that far away at all…) and Bullard saying that while there will be a point when policy will have to be tightened, he is ‘not willing to put a date on that…’ And while both of these men did not suggest that policy was changing anytime soon, in my opinion they are both sitting on the fence – able to go either way depending on what the data tells us. Just a thought.

Look – investors continue to focus on what we are about to hear today from the Biden camp… increased fiscal spending, continued low interest rates, and the promise of a return to ‘normal’ as 3 and soon to be 4 vaccines are rolled out across the country and the world. Word has it that Biden will introduce a $2 trillion plan today – which should not be that much of a surprise – considering that Joey has made reference to ‘trillions’ of dollars of stimulus – so we knew it has to be more than 1 and with the latest $900 billion that was approved two weeks ago – that brings the total package closer to the $3 trillion that Nancy had pushed for back in October. I suspect that the markets are going to approve of this… at least for today.

On a side note – the drama continues in DC with the House voting to once again impeach Trump and while it as all pomp and circumstance during the day – Nancy signed the article of impeachment at about 5 pm last evening – setting the stage for a showdown in the Senate… Will Mitch allow this to move ahead only days away from the beginning of the Biden administration or will he put it off until after next week’s inauguration? The smart money is betting that a trial will NOT happen before next Wednesday.

What is once again interesting to me is how equity markets and investors completely overlooked the chaos of the most recent days – chaos that had the very opportunity to cause the markets to retreat – yet they did not… and is that because investors do not believe that there was a real threat to our democracy? Is it because they realize that the days of Trump are over anyway and so they choose to look through the chaos and focus on what’s ahead? In any event – we have said this over and over – political events have the ability to disrupt in the short term – but do not in the long-term price stocks and while there was only a fleeting moment of disruption – it appears that investors are not deterred.

Sectors that have led the markets over the past couple of weeks – took a bit of a breather as they digest the most recent moves.  Financials and Energy – both ‘hot’ sectors of late – did little. Value names marched in place while Utilities rose as 10 yr treasuries dropped. In the end – stocks will remain choppy for a bit – but with all of the newest fiscal stimulus on the horizon many remain more optimistic.

I think there are two issue that investors really need to be conscious of… 1. Rising rates – which I think will happen faster than the market expects – which will cause valuations to come under pressure sooner than investors expect – causing stocks to weaken and 2. Inflation… which I continue to believe will also rise faster than the market expects – forcing the fed to either ‘let it run hot for a bit’ or allow rates to rise as they attempt to tamp it down… The risk here is that we do NOT want to be behind the 8 ball if that happens… but again FED officials assure us that they know what they are doing and that rates aren’t going anywhere until January 2023.

Dow, S&P and Russell futures are all a bit higher in early morning trading… Up 83 pts, 5 pts and 21 pts respectively while Nasdaq futures are under a bit of pressure falling 20 pts in the wee hours. The story is the same, the virus, the vaccine, the drama in DC and the Biden plan… which has been ‘leaked’ to his allies in Congress assuring us that the main points of the plan get out to the marketplace ahead of his presentation – giving the markets a chance to react before he speaks. He is betting that investors will approve and that the markets will surge – allowing him to say that investors are happy with the plan – giving him a ‘win’ even before he moves into 1600 Pennsylvania Avenue.  It’s all very choreographed…

European stocks are higher ahead of the Biden announcement. Overnight Fed Governor Lael Brainard pushed back on suggestions that the FED will taper its bond buying program (think easy money for longer) all while ECB (European Central Bank council member – Francois Villeroy de Galhau made it clear that the ECB will stay the course and keep easy monetary policy in place for as far as the eye can see. On the economic front – Germany released its full year 2020 GDP – it shrank by 5% a bit better than the expected -5.1%.  As of 7 am – the FTSE +0.79%, CAC 40 + 0.04%, DAX+ 0.19%, EUROSTOXX +0.25%, SPAIN -0.11% and ITALY -0.03%.

OIL is flat – trading at $53.11.  We are approaching the February highs of $55 and expect to find some resistance.  We remain in the $45/$55 range for now… but I do expect that traders will test resistance ($55) in the near future to see how strong it is.

The S&P closed at 3809 – advancing 8 pts as it awaits not only the stimulus news but the start of earnings season.  The S&P has remained in a very tight range over the past week as it ‘Bidens’ it’s time.  While earnings are expected to be better in a yr over yr comparison – my sense is that much of this is already priced in, so be careful. Unless these companies handily beat the expectations (which I assume 80% will) AND make very rosy forecasts about the future – I would not be surprised to see this rally fade and pullback a bit… I do not expect it to ‘correct’ by any big margin at all… unless earnings really disappoint… but I would not be surprised to see a pullback anywhere between 5 – 7 % – in fact, I think it needs to do that in order to advance from here. So stick to the plan, create a well balance and defined portfolio… trim and rebalance where necessary, call your advisor and focus forward… 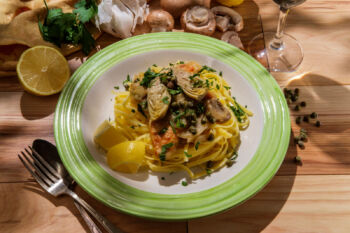 Here is a dish that incorporates the great tastes of Artichokes and Pancetta… this is a classic Italian dish.

In a sauté pan, heat the oil and add the onion and pancetta. Cook over medium heat until the onion is soft and the pancetta is cooked maybe 10 minutes. Now add the garlic and cook another minute or two.

Next add the artichokes, some white wine and a squeeze of fresh lemon juice – bring to a boil.

Reduce the heat to low and cook until the artichokes are tender – maybe 10 minutes. Season with s&p. Toss in the chopped parsley and mix.

Now cook the linguine until al dente – like 8 mins or so… drain – always reserving a mugful of the pasta water. Toss the linguine into the lg sauté pan and mix well. Keeping the heat on low. If the pasta absorbs all of the liquid – add in some of the reserved water to remoisten. Toss – add in a handful of cheese – toss again and serve immediately in warmed bowls. Have extra cheese on the table for your guests. Serve with your favorite chilled white wine.