AMZN Denies any Bitcoin Rumor Leaving Some to Ask What’s Next? – Try the Veal Cutlet Capricioso 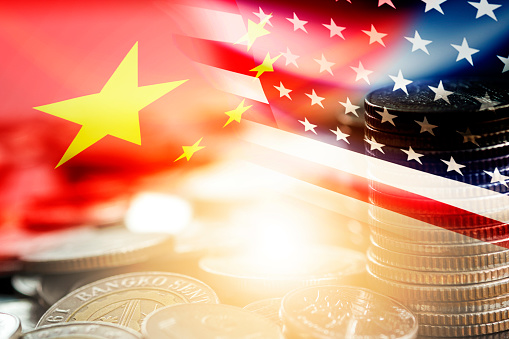 And so the worries from yesterday morning faded from darkness to light…the China crackdown which had cast a pall over global markets yesterday morning ended up being a non-event for US markets (although it is trying hard again today to push stocks lower – more in a minute)…..Stocks rallied after an initial push lower all finding support at about the same time…10:30 ish….and then the slow and steady climb began…..by the end of the day – the Dow added 83 pts, the S&P up 10, the Nasdaq added 4 pts while the Russell and Transports added 7 and 16 pts respectively.

It is a big week for earnings, and we are getting some big names reporting…. a flurry of giant technology companies that will surely prove that the pandemic did little to hurt their bottom lines, in fact, what we are expecting is to see that the pandemic in fact helped their bottom lines, much like we have seen so far this season.
Yesterday’s darling was TSLA – which we had to wait all day for…as they announced after the bell – and what did Lonnie do?  He reported an astonishing number for the quarter…. some $11 billion on the top line and a net profit of $1 billion after all was said and done…. earnings per share came in at $1.45 vs. the expected 0.97 cts…. A beat of 50% over the estimates as they beat on every possible metric you can imagine…. In addition, he reported a $23 million ‘impairment’ related to the value of his bitcoins which his accountant filed it under ‘Restructuring and Other Incidentals’ …. Ok – I added the word incidentals – just adds to the drama of it all. (Recall that bitcoin plunged from $60k to $30k per coin in the quarter)

The headline tells us the details

“Tesla reports MORE than $1 billion in net income during Q2, up TENFOLD from a year ago”

Apparently, they sidestepped the global chip shortage by substituting ‘alternative chips’ and developing their own software for the cars…. not sure what alternative really means but whatever…. he also noted that the California plant served US customers while the China plant now serves as the main manufacturing and export hub for the rest of the world…. demand in Europe is very strong.  The stock rose by 1% in the after-hours session after having been up < 1% in the regular session. Expect to hear more about his all day today….and expect to that to dovetail into the conversation about the other tech companies due out this week not because they are like TSLA but because they are tech companies. GOOG, MSFT & AAPL due out today after the bell, with FB and AMZN later in the week.

The rising cases of the Delta variant did little to stop the push higher but is being cited as a ‘possible headwind’ in the weeks ahead – which makes zero sense to me… ‘in the weeks ahead’….it will be an issue, but today it is not?  In addition, asset managers and investors are waiting patiently for word from the FED on Wednesday……
Eco data yesterday revealed that Existing Home sales plunged by 6.6% vs. the expected rise of 3.5% while the Dallas Fed Survey also came in a bit weaker….It seems that home buyers just want new….they are not interested in buying someone else’s mess…that needs to be renovated and updated to live in today’s world….New homes come with all the bells and whistles….and you can finance the whole shebang….surely this decline will prompt the FED to maintain its course and continue to support the overheated housing market citing the ‘weakness’ in existing sales….

This morning the China syndrome is adding to the global pressure yet again…. Stocks in Hong Kong and China took another beating overnight – falling 4.2% and 3.5% respectively…leaving both those indexes down 8.5% and 7% in two days….as the regulatory heat gets turned up.  European markets are low this morning all down about 0.75% across the board.  The Asian weakness, the spread of the Delta variant and earnings are all the rage…..In addition, the Europeans are also waiting on what Jay Powell has to say, because then they expect that soon after – the ECB (European Central Bank) will come out with their own statement….and the fear is that if the FED starts to taper and change policy, the ECB will not be far behind…Recall that ECB President Christine Lagarde told us that the ECB will not make a move until the FED does….so get ready….

US futures are lower again this morning in what feels like a ‘do over’ from yesterday…it is the China action and the rumor that US funds are liquidating ‘Asian assets’ as talk of the US is considering restricting investments in both China and Hong Kong and that is causing this latest round of selling.  Look China is now cracking down on Tech, education, real estate, healthcare and even food delivery services in an attempt to tighten its grip on Big Tech –  and the onslaught that began only months ago will continue to get worse…and then toss in the whole ‘Taiwan’ issue and the recent comments by the foreign minister about how relations between DC and Beijing are at a stalemate and have never been worse in years only adds to the hotbed of angst…..

Bitcoin which rallied hard over the weekend – rising nearly $8k dollars on rumors of Amazon getting into the Bitcoin game – sent it briefly up and thru $40k – as the shorts ran for cover and investors tried to take advantage of the rumor is now trading back at $37k after Amazon came out and denied the rumor that they are considering doing anything with Bitcoin….…so will we see Bitcoin trade back down to $30k

Recall the rumor started because Amazon has a ‘help wanted’ ad out there looking for a ‘Digital Currency and Blockchain Product Specialist’ – so clearly there is something going on…maybe it will be an ‘Amazon Coin’ something that directly challenges Bitcoin for control of the market – and would be a development that disrupts the Bitcoin story…. …..  Why is that so absurd?  Hasn’t Amazon taken control of our lives?   Ethereum which also got caught up in the excitement is also down about 2% at $2200.

The 10 yr. treasury yield fell yesterday and ended the day at 1.25% – which is interesting since so many analysts on the street are expecting 10 yr. yields to be closer to 1.8% by year end…which is a substantial move higher from here…. the 30 yr. ended at 1.90%.  Oil is holding around $72/barrel.

The S&P closed at 4,422 – closing at the day’s high…. Now since we have broken up and thru what was trendline resistance at 4406 – the new trendline suggests 4470 but you can also draw one and argue for trendline resistance at 4550…. In any event…it is what it is and so much of the next move will be determined by the FED.  Jay Powell has made it very clear that they are going to talk about it and he is sure to make that clear in the notes tomorrow…..but what he may not do is define a time frame for it to begin…and that will be what the markets are looking for…..so if he doesn’t define it, does that mean it’s not happening anytime soon or does it just mean that the is not going to announce it until the August Jackson Hole boondoggle?

In any event – we are entering a seasonally volatile time for the markets…..the virus variants remain risk factors for the markets especially as we come into the fall….market corrections range from 5% to 20%  – I am thinking maybe we get a 7 – 10% correction….but so much will depend upon what Jay Powell says….So – stick to the plan…remember – investing is dynamic…keep some cash ready to deploy, but don’t be so quick on the trigger just yet…

You begin with pounded veal cutlets.  rinse under cold water and pat dry with paper towel.  dredge the cutlet in flour, then dip in egg wash (scrambled eggs before you cook them) …. then cover in the homemade Italian style breadcrumbs* and set aside.

When completed – heat up olive oil in a baking dish under the broiler… (. being careful to watch as the oil will ignite if it gets too hot before you begin cooking.)   Dip one side of the breaded veal cutlet in the hot oil and flip to the other side and broil – 3 to 4 mins.  While broiling prepare the Capriccioso salad for the finishing touch.

You can use whatever works for you – arugula, spinach, romaine etc.  chopped red onion, diced tomatoes, and quartered pieces of bocconcini (small mozzarella balls).  season with s&p, oregano, and fresh lemon juice – refrigerate.

Flip the cutlet and broil the other side. When done remove from oven and place on center of warmed plate.  Remove salad from fridge – drizzle with olive oil and Champagne vinegar and toss.  Using tongs – “dress the cutlet” with the Capriccioso salad and serve.   Outstanding.