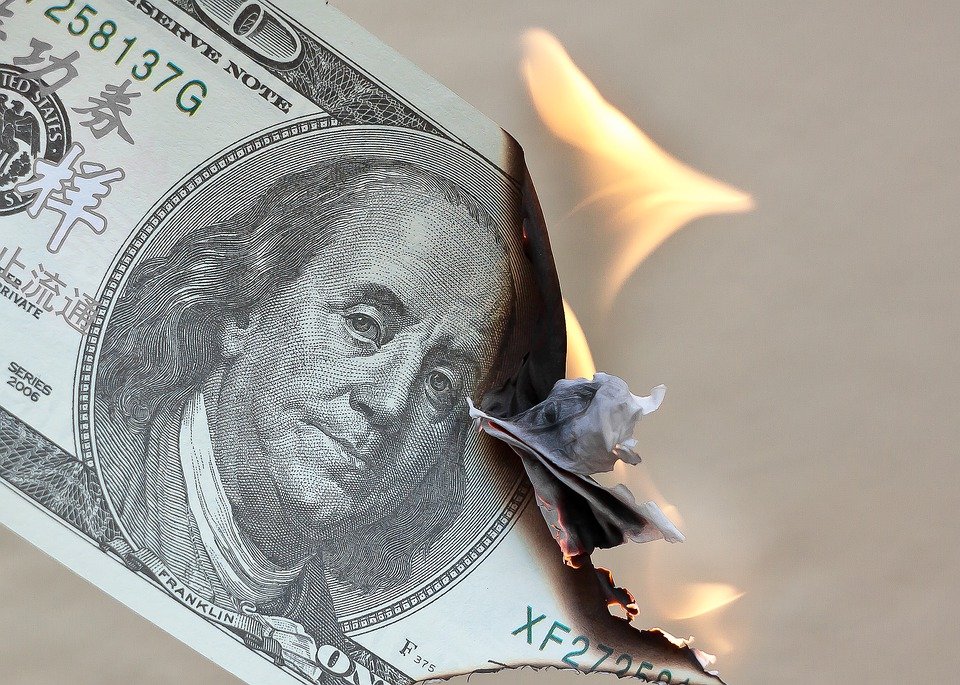 CPI came out at 8:30 on Friday morning and reveals that Inflation is running at a 40 yr. high…. rising 6.8% in November – which is also an issue – since many others point out that it is much higher than what the gov’t is reporting. Bill Ackman – CEO at Pershing Square with a net worth of $3+ billion, pointed out in tweet over the weekend that top line CPI is 10.1% vs. the 6.8% we were told.  How does he prove that?  Well, below is his tweet –

“The largest owners of nationwide single-family rentals are reporting 17% y/y increases.  OER (Owners Equivalent Rent) is 30% of the Core CPI and 24% of reported (topline) CPI.  Using the more empirical measure in the calculation increases today’s (Friday’s) Core CPI from 4.9% to 9% and (topline) CPI from 6.8% to 10.1%”

Remember – that metric is not included in the CPI ‘official estimate’.

Now – as I pointed out in my note on Friday – the whisper number had a 7 handle on it….and when they reported 6.8% it was seen as a WIN!  Investors got a chance to digest it and consider that while it was HOT, it wasn’t as HOT as the whisper number suggested, no matter that inflation is now running at a 40 yr. high – so guess what?  It was a relief……!  And stocks zoomed higher
(Omicron not even a part of the story anymore) …. the Dow ended the day +216 pts, the S&P’s up 45 pts, the Nasdaq tacked on 115 pts, the Russell fell 8 pts while the Transports gained 78 pts.
Here is what we heard – ‘It was a bit of relief’ and ‘Investors were surprised that it wasn’t hotter’ or ‘this number was expected so no surprise there’ etc.….

Do you see what’s going on?  They have conditioned the algo’s and investors to welcome the news…somehow telling us that prices are being driven by strong consumer demand which suggests a strong economy, so that’s good……We should have expected this to happen, we should be excited that prices are moving up and people are paying elevated prices……which is a far cry from what they had been telling us….that ‘inflation is transitory’ or ‘slow down, nothing to see here, move on’ or ‘it’s all about the supply chain, once that opens up, inflation will plummet’….Yeah – how’s that working for you?

Two weeks ago, Jay made it official – he was no longer using the word transitory because – as he put it – too many people don’t understand the word – they thought it meant 5 or 6 months…when in reality it just means that it will go away ‘at some point in the future’ (which is apparently NOT 5 or 6 months)….which is apparently what Jay meant all along….he never defined it by weeks or months…he just kept telling us it was transitory…and now that he thinks none of us understand the word – he is dropping from the narrative and now saying that inflation will most likely be here longer than we expected…..Hmmm…do you think it has anything to do with the length of time that they stimulated the system with massive amounts of liquidity? Do you think that just maybe they pushed too hard for too long?  Do you think they overshot?

Now we are faced with exactly what he said would NOT happen…and that is a doubling up of the pace of the taper – going from $15 bil/month to $30 bil/month – most likely formerly announced this Wednesday after the FOMC meeting…. and the reality that he might be forced to raise interest rates during the tapering process – which is something he said ‘would not happen’…. It’s a throwback to Georgey Bush Senior when he was running for President and told the country at the 1988 GOP convention – “Read my lips – No new taxes” …. But then in 1990 – when both the house and senate were controlled by the Democrats with a Republican President – they forced him into a corner, fought him every step of the way until he conceded and agreed to a compromise which raised several existing taxes as part of that 1990 budget agreement –  which then spelled the end of his presidency…which won’t happen to Jay…because he is not president…but a spike in interest rates to combat out of control inflation could spell the end of the current setup in November 2022 (think mid-term elections).  Just sayin’.

The focus on Friday was all about the CPI and the speculation about what the PPI will reveal tomorrow…….PPI is the Producer Price Index – and details the cost of all the inputs that go into manufacturing all of the products that come out the other end – and that number has been rising as well…in fact – tomorrow’s report is expected to be +0.5% m/m, Ex food and energy of +0.4% m/m, while y/y gains are expected to be +9.2% on the top line while ex food and energy is expected to be +7.2%…. The topline whisper number does have a 10 handle on it – but let’s see how they manipulate the report.  And again, investors do not appear to be concerned….as they take stocks higher.  Now while stocks did advance last week, we are still below this year’s all time high of 4750 ish…. but could test that today ahead of tomorrow’s report if they can control the narrative….

Look, the FED is set to lock down for the two-day meeting beginning tomorrow – but do not expect to hear anything from anyone on the FOMC today (think quiet period).  But that does not preclude us from hearing from other FED members that are not part of that decision making process….so the question is – will we hear from anyone today?  If we do, it is sure to be St Louis’s Jimmy Bullard – If not, then not.

US futures this morning is UP…. but are off their overnight highs…Dow futures are +85 pts, S&P’s +15, the Nasdaq is up 66 pts, while the Russell is ahead by 10 pts.  There is no eco data out today…so the chatter will be about Friday’s CPI, tomorrow’s PPI, and Wednesday’s FOMC announcement – about inflation, tapering and interest rates.  Know that this is a big week for global central bank announcements…. Expect to hear from the FED, the BoJ (Bank of Japan), BoE (Bank of England) and the ECB (European Central Bank) – all are due to make policy decisions this week – so expect this to be at the top of the agenda….

I was on The Larry Kudlow Radio Show on Saturday morning with Hightower’s Stephanie Link – and we tackled this very subject.  Click here to listen

What I found to be of keen interest is Larry’s assessment that interest rates could rise as soon as next month – that’s right – January…. which is NOT what the market is prepared for at all….and if that does happen – then make sure to strap yourself in……Take a moment to listen…. Curious what you think….

This morning European markets are all up as they prepare for a big week out of global banks….as there is now a global growing focus on super high inflation around the world and how central banks are prepared to handle it. After this week – expect the flow of eco data to slow into the final two weeks of the year and expect so many money managers to sit tight – no one is risking performance in the final 14 trading days…At 6:30 am – European markets are up about 0.5% – 1% across the board.

The 10 yr. treasury yield is now at 1.47%….and this suggests that the bond market does not believe that rates are going up anytime soon….and to that I say – just wait until the FED is no longer the buyer of last resort…. Where will the natural buyers stand?  Will they defend the 1.47% yield rate?  My money says – not…. When the FED backs away, natural buyers will move lower – leaving a void in demand and a void in support…. bond prices will fall, and yields will rise……. The pace at which they rise is what investors need to pay attention to…. And if a January rate increase IS on the table – they will just ignite the re-pricing….

Oil is down 20 cts this morning…. trading at $71.45/barrel…. sitting just below trendline resistance at $72.95…. There is no specific oil data out, so I suspect it churns right in line…with an upward bias…. The economy is strong, and demand is alive and well.   Remember it did kiss trendline resistance twice at $72.95 last week – 3rd time is always a charm….so sit tight.

The S&P closed at 4712 and if futures hold this morning, we can expect to see the S&P open at about 4725…. leaving it just 25 points away from the 2021 highs….  Tomorrow’s report will drive the next move…..if the data is stronger than expected – I would expect the market to back off – unless of course they can convince us that stronger inflation is good.  Which they will work hard to do.

Stay the course, build yourself in some downside protection.  Breadth does remain a bit questionable…with more stocks below their 200 dma vs. above…. just sayin’.

So we are moving to the deserts now for Christmas  – today’s recipe come from one of my Twitter followers that gave me his Nonna’s Christmas cookie recipe –  Look for the picture on my Twitter feed.

Now – Baking is a science, so ingredients and measurements make perfect sense….

Rough chop the nuts in a food processor – do not pulverize them.  You might be better off chopping with a knife.

Mix all the ingredients in a large mixing bowl, until it is all mixed and the flour is absorbed, and the mixture is sticky.  Apply a small amount to oil to your hands to help you handle the dough. Make 5 small mounds and place on a baking sheet lined with parchment paper.

Place in the oven and bake for 25 mins or until the outside is toasted.  Do not let it burn.  When you take them out of the oven – brush them with a bit more honey while they are still hot…. – then allow it to completely cool before you cut them in pieces.  You can keep in the fridge or even freeze them for the holiday.
Enjoy.