The sullen mood on Tuesday turned into a celebration on Wednesday. The algos went into overdrive creating a frenzy across the sectors – Energy was on fire – rumor had it that Trump is preparing to announce support for the industry – if for no other reason than national security. The sector surged by 7% which brings its total rise for the month to a whopping 33%! Oil surging nearly 40% and XOM rising 5.4% after the CEO came out and announced that the “dividend” is safe! Not cutting it, not eliminating it, but KEEPING it. It’s sacrosanct! And the algos ate it up. Tech took the supporting role, basking in the sunlight as earnings steal the show, GOOG (+8.7%), FB (+6%), TSLA (+4%) all reporting stunning results, feeding the beast as other names in the sector joined in the fun – AMZN (+2.5%), MSFT (+ 4.5%), AAPL (+3.8%) etc. The Gilead (GILD +5.6%) story is back and that is even more significant when we talk about the virus.

Now recall how their drug remdesivir was getting all kinds of press early on causing the stock to rally some 26% since February 21st and recall how there has been some back and forth on this. Did it work? Did it not work? Etc. Remember last week when China released results of a trial using this drug – they dismissed it as a “non-event.” It didn’t work! And that sent the stock and the market lower as the excitement faded – so it was back to square one.

Gilead immediately disputed the results from China, essentially saying they “messed it up” (I think they actually described it using more colorful language), didn’t conduct it properly, didn’t have enough participants, didn’t test it under the proper conditions, etc. Even Dr. Fauci came out and disputed the results telling us to be patient because the famed University of Chicago was conducting their own test. Yesterday – we got some preliminary results and it smacks directly in the face of the results produced out of China. Remdesivir is proving to be a drug that has positive results, shortening recovery time and improving the quality of life for patients. BOOOOMMMMM – the stock surged – taking the biotech index – XBI a bit higher, while adding fuel to the fire that sent the broader market higher.

But the event that sealed the deal was the 2 pm ZOOM press conference featuring none other than Fed Chair “Papa” Jay Powell. It was appropriate considering yesterday’s economic data was atrocious. GDP -4.8% (exp was for -4%) Personal Consumption -7.6% (exp was for -3.4%) and Pending Home Sales at -20.9% (exp was for -14.3% month/month). This on top of the other weaker than expected economic reports of late. We get another look at Initial Jobless Claims – which is expected to show another 3.5 million Americans out of work.

In this press conference – which will surely go down in history as a key conference – Powell said that the virus brought the economy to an “abrupt halt.” Since it’s uncertain how long the slowdown would last – he and the FOMC (Federal Open Market Committee) will keep interest rates AT zero – forever- or until the nation was back on track – whichever comes first! (Think housing). He went onto say:

“Economic activity will likely drop at an unprecedented rate in the second quarter, it may well be the case that the economy will need more support from all of us, if the recovery is to be a robust one.”

As expected he also reiterated the fact that he has plenty of tools in the toolshed and that the FED will use all of those tools as appropriate to support the economy as the virus is “sure to weigh on the economy in the days and months ahead!” (DO YOU THINK???)

That sent the market up another 1% before it settled down into the closing bell. All very exciting.

Now overnight the party continued in Asia – Japan +2.1%, Hong Kong (closed), China +1.18% and ASX +2.39% as investors watched and analyzed the Gilead Sciences trial results and digested the latest FED announcement. Economic data out of China was mixed – the official survey out of China says that manufacturing expanded in April while a private unofficial survey says – Not so fast – manufacturing slowed in April – and so it continues.

In Europe – the mood is a bit sour. The 19 member Eurozone countries reported a record PLUNGE (-3.8%) in 1Q output – (Were you expecting something else?) – reflecting the impact that the shutdown created as the continent went dark and France has now entered a “technical recession” reporting a drop of 5.8% in 1Q GDP (can you imagine what the Italians are going to report?) This only further supports what we expect to hear out of the ECB (European Central Bank) today. It is sure to be another “do whatever it takes” moment!

US futures continue to march higher as the algo’s are not going to “fight the FED” or the ECB or the BOJ or the RBA or the PBoC or any central bank that is prepared to unleash a wave of stimulus to battle the economic effects of the virus. Earnings after the bell yesterday – FB, TSLA, MSFT helping to push stocks higher. Dow futures are up 100 pts, the S&P +15 pts, the Nasdaq +118 and the Russell is flat – after having outperformed over the past couple of weeks.

Economic data today includes Personal Income of -1.5%, Personal Spending -5%, Initial Jobless Claims of 3.5 million, Continuing Claims of 20 million and the Chicago PMI of 37.7 (this is a read on what is happening in the Chicago area economy).

Earnings will continue to roll off the press – this morning we will hear from more than 50 companies that are ready to pull back the curtain: HGV, OSTK, SIX, LAZ, CG, MMC, LKQ, WORX, BAX, EIX, TAP, COOP, NLSN, AAL, PH, GT and the list goes on and on…

After blowing through 2850 – the S&P traded up and through 2900 yesterday closing at 2939 well on its way to attempt to challenge resistance at 3005. With futures up this morning, we can expect it to tease us as it makes its move. Will we get tired or will the latest FED announcement provide enough fuel to get us there? We are about 2% away from kissing that level – and with more policy support from both the government and the FED it would not be a surprise to see us go there sooner rather than later. 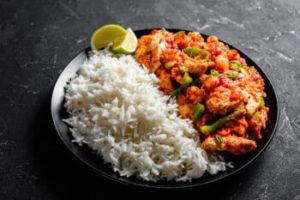 This is actually a great dish – introduced to me by a neighbor in Tarrytown, NY over 30 years ago who as a teenager was forced to flee Iran with his family during the 1979 Revolution with nothing more than the clothes on their backs.

It’s simple to make and is always a fan favorite.

Begin by adding a bit of olive to the pot and adding the ground turkey – season with s&p and brown nicely. Once done – remove and set aside. In the same pot, add a bit more oil, sliced garlic and the sliced onion (one big yellow onion will do it) – saute until it soft and translucent – maybe 10 mins or so. Add back the turkey and mix well. Season again with s&p. Now add the crushed tomatoes and &frac12; can of water to the mix – bring to a boil and then turn the heat down to low.

Cut the green beans in half and add to the pot – stirring to mix all together. Season with a shot of both, cinnamon and nutmeg – go easy – taste it – do not over season it – just enough to give you a hint “that there is something there.” Cover and simmer for 20 mins.

While this is happening – make a pot of white rice – when ready – place a scoop or two of the rice on the plate and top with the turkey stew. It’s a simple dish – you use one pot and it’s good for you.