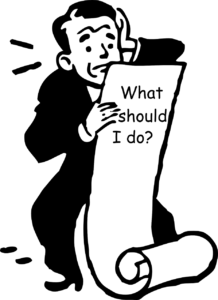 Mamma Mia!  First it’s “legendary investor”  Stanley Druckenmiller, then it’s Dr. Fauci and then it was Fed Chair Jay Powell followed up by David Tepper of Appaloosa Management who all chose to make (negative) comments  (I am surprised we didn’t hear from Billy Ackman again as he is always willing to chime in) – causing the algo’s to go into a frenzy sending all the indexes lower and creating a tone that could not be more negative….

Stocks which were higher in the pre-market began to struggle at 9:10 am as Chair Powell’s comments began to hit the tape – investors wondering – What would he say? Will rates go negative? Has he run out of tools to fight this disaster? Futures began to back off only to go negative  before the bell rang – causing the markets to open lower before attempting to rally as investors/traders took in his comments.  But then the algo’s jumped in to create the havoc that they do….tripping over each other as they all run for the door at the same time – causing the indexes to collapse swiftly…..as the day wore on, the markets got weaker – thanks to two more billionaires that chose to ‘talk their book’ – much like Billy (Ackman) did back in early March and even Warren (Buffet) did two weeks ago…..By the end of the day stocks were nursing their wounds – as the Dow gave up 516 pts or 2.1%, the S&P lost 50 pts or 1.7%, the Nasdaq giving up 140 pts or 1.5% and the Russell – the biggest loser – gave up 42 pts or 3.32%!

Now it started on Tuesday with ‘Legendary Investor’ Stanley’s presentation to the Economic Club of NY  – where he said that “the risk/reward for equities is maybe as bad as I’ve seen it in my career”.  He went onto use other negative adjectives to make his point but the media didn’t really pick up on it then.  Yes – there was some rumbling but the fallout didn’t happen until yesterday.    (note that the media refers to him as ‘legendary’ much like they refer to Warren Buffet as ‘the master’ – it’s like FOOD – it’s all in the presentation)

Then on Wednesday we got Dr. Fauci who appeared before Congress warning that a pre-mature opening would risk the possible resurgence of infections and deaths….not a certainty but a possibility…..Now some will point to South Korea and China as examples on that very concern  – but I would say – is it really a resurgence?  Yes, an uptick in cases is referred to ‘an increase’ but ‘resurgence’ – that is a different word with a different connotation, no?  I mean did South Korea or China once again close their borders and force their economies into a coma?  Have we heard of thousands of new cases and hundreds of new deaths?  We have not and they did not.  Does the market expect a slight rise in new cases – Yes, but does the market expect a complete second round of shutdowns – not so much.  But remember – there is money in creating fear…

And then yesterday at 9 am – Fed Chair Jay Powell took to Zoom and spoke at the Peterson Institute about the current state of the economy and the outlook going forward….and while it was ‘not pretty’ it was not the disaster that so many made it out to be.  Now the WSJ leads the charge with this morning’s headline:

And guess what?  He is RIGHT – it is uncertain and it has been uncertain for months now – we know that.  This is nothing new… he also said that we ‘may need more stimulus to support the economic recovery’ – guess what?  We knew that too. The most important thing to remember is that this ‘recession’ if that’s what we’re calling it – was manufactured and forced upon the country and the world.  This is not your mother’s typical recession by any stretch – but we knew that too.  He went onto say that

“There is a growing sense that the recovery may come more slowly than we would like and that may mean that it’s necessary for us to do more.” –  … and we knew that too…

This a kick in the pants for Congress and the WH to spend more – which they are doing – I mean Nancy Pelosi and the Democrats laid out new plans on Wednesday to spend more money – $3 Trillion more in fact….and the WH is well aware that they will need to do more if the country can’t get back to work anytime soon – another argument that is falling along party lines as well…..  Now these comments are cautious for sure – but are they new?  If anyone at all has been paying attention – then this outlook should not be a surprise – all you have to do is LOOK AROUND you… Jay Powell did not say anything that is unknown…

And by the way – white collar jobs have not been hampered at all – in fact it is amazing how much more productive people are. I’ve had plenty of conversations over the past 8 weeks with people that are working remotely and using Zoom, Skype and Facetime to get work done – Networking zoom meetings have replaced face to face lunches and dinners while the comments I keep hearing are “I’ve never been busier or more productive..”  No wasted commute times, no fighting for a taxi, no waiting for the train, plane or automobile… People are all over the place – hunkered down in the mountains, on the coast and in their homes or apartments yet business has not stopped for them and some would say – it has only improved… Now yes – that is the white collar sector of the economy – the blue collar sector is still reeling but starting to wake up…

Next toss in a couple of billionaires that are well known in the industry and manage vast amounts of investor wealth in addition to their own…and BOOM – you’ve got just another reason for the algo’s to take advantage of the hysteria created by the headlines… First it was Stanley Druckenmiller and then it was Davey Tepper – who both said the market is ‘overvalued’ adding more negative adjectives to stoke the flames… And then yesterday we got Powell and Tepper all accentuating the negatives – most of which are not new news items.  But investors/traders and algo’s all react to the headlines… but it is the algo’s that cause the speed of the move (lower or higher) that sets the tone… Now maybe today the media will feature other ‘billionaire’ asset managers that can and will dispute the likes of Stanley and Davey – so let’s see.  In fact – CNBC has already had legendary investor Billy Miller of Miller Value Partners – that disagrees with both Davey and Stanley – so should the algo’s go all in today and BUY everything that they SOLD yesterday?  We will soon find out… futures which were lower again overnight are now flat while the Nasdaq is in positive territory.

Overnight – stocks in Asia fell – following on the heels of the US selloff and more analysis on Fed Chair Jay Powell’s comments…..essentially the take away is that the current stimulus measures are NOT enough from any of the central banks – and that Jay’s comments have ‘dampened risk appetite’… and this then brings up the whole resurgence theme and US/China relations theme and anything that accentuates the negative storyline….Stocks in Asia ended the day lower.  Japan – 1.7%, Hong Kong – 1.4%, China – 1.08% and ASX -1.7%.

US futures are now falling… with Dow futures lower by 200 pts, the S&P’s giving up 20 pts, the Nasdaq falling 62 pts and the Russell off by 24 pts..  And not to be outdone – our friends at Goldman Sachs can’t help themselves…as they now chime in – amplifying the negative tone as they ‘revised’ their outlook to ‘Gloomy” from ‘Cloudy’  for the US labor market….saying that unemployment will hit 25% vs. their initial 15% estimate….hey guys, guess what – others already beat you too it – that has been the call for a while now – did you just get the memo?  GS analysts David Mericle and Ronnie Walker actually put this in a note to clients – “more workers will lose their jobs and a larger share of them will be classified as unemployed”

Stunning observation…but it is GS… they went onto say that they expect year end unemployment to be closer to 10% because they expect people will return to work!  I mean – You can’t make this stuff up!!!

Eco data today includes the next round of Initial Jobless Claims – exp of an increase of another 2.5 million more who lost their jobs – classifying them as unemployed.

The S&P closed at 2820 – on its way to test support at 2720… a level that I have identified over and over as a possibility.  Look – the market is just waiting to see how this unfolds…after nearly 7 weeks of an advance in anticipation of re-opening – the S&P was knocking on the door of resistance at 3000… But there was always a risk that the news would turn negative – almost as if it was planned…I mean where were Druckenmiller and Tepper last week -as the markets surged?  Were they getting short – preparing for their appearances where they could reveal their negativity and get ‘more bang for their buck’?  I mean – it’s just a question and a legitimate one at that… If the re-opening does not produce a resurgence and the markets rally – will they change their tune or will they cover their shorts first and go long before telling anyone – much like Billy Ackman did in March.

We are still in between the trendlines… 2730/3000 – and will most likely stay there until we see what happens next… And again – if we begin to open and see a resurgence – then watch as we collapse, if not then we should and will see the sun shine and the markets surge and challenge resistance at 3000. 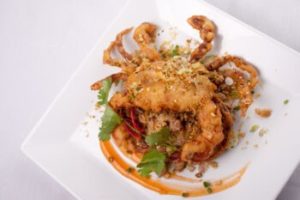 The old adage says that you eat soft shell crabs during any month that does not have an “R” in it…Thus – May – August is always a good guide.  There are many ways to prepare them and many different sauces to serve them with.  Today’s recipe is simple and always a winner.

Soft Shell Crabs – for this you will need:

The crabs (have the fish guy clean and trim for you),whole milk, flour, s&p, butter, garlic, white wine.  (you can add some heat by adding in cayenne or hot pepper flakes)

Start by rinsing and soaking he crabs in whole milk for about 30 mins.  Then remove and let drain.  Next – season with s&p and then dredge in flour – shake off any excess and set aside.

In a large nonstick pan – heat up the butter and a splash of olive oil so that the butter does not burn.  When hot – add the crabs and brown on both sides until you form a nice goldeny crust.  Remove and set on individual plates on a bed of fresh spinach or arugula.

Next – add the sliced garlic – and let it brown nicely…do not burn… next add in about 3/4 cup of dry white wine – deglaze the pan and allow the wine to reduce by about 1/2.  Add a bit more butter and allow it to blend nicely.   Spoon the sauce over the crabs and serve immediately.