The Vaccine Race is On…Try the Shepherds Salad

S&P, Nasdaq, and Russell all end higher while the Dow ends lower in a continuing struggle over what’s next… as stocks show signs of exhaustion – NFLX ended the day lower – down 6.5% – as investors punished it vs. the whole sector – although I must say that the pressure on NFLX did keep the others in check as the Nasdaq only added 0.28%… The overall gains came from a move into the beaten-up value names at the expense of some of the growth names… and that makes perfect sense… especially if investors remain concerned over the future of the economy, earnings and the election.

Surging virus infections – or maybe not – as the CDC has admitted to mis-categorizing some of the results mixing both virus tests and antibody tests together. Toss in the errors made by the Orlando Health System and you get even more errors that appear to suggest a larger surge… both which are clear mistakes, but which has caused the raw numbers to appear to spike when in reality – antibody tests do not suggest current infection – it suggests a prior infection that has been resolved… but this has caused anxiety levels to soar as parts of the country consider lockdown mode again… while other parts continue to fight…

Dr. Fauci continues to plead for the younger set to pay attention and to be careful as that demographic is being held responsible for latest uptick in infections… Masks – appear to be working to help stop the spread – and businesses around the country are taking control and demanding a mask when you enter a store… And again over the weekend – we find Florida in the news… Democratic Rep Donna Shalala is freaking out – saying : “the residents here are terrified and I’m terrified…” Look,  I live in Southern Florida along the east coast – not far from her district in Miami/Dade counties and I do not see the panic in the streets that she or the media is projecting… Now that does not mean I am saying the virus doesn’t exist – I am only saying that I don’t see any ‘terrified’ people walking the streets nor do I see panic across the state… What I am saying is that what the media and Donna Shalala would have you believe and what I and others see are two very different things… but we can debate that all day…

Vaccine or Vaccines… what are we to expect? The race is on – we have a handful of biotechs and large pharma that are working hard to develop and test a vaccine. Will we get one before year end or not? Names to continue to consider – AZN, MDRN, REGN, NOVX, PF, JNJ… and remember – AZN is due to report phase 1 trial results this morning… what will we learn from that? A positive result has the ability to light the market on fire, while a negative result will certainly cast a pall over the market.

Politics – what are the odds as Biden now holds a strong double-digit lead over Trump in the polls? And who is being kept as the big secret? Here are the combinations – you can attach you own percentages to the results… My guesses are as follows… and they remain fluid based on the daily headline…

And the second spot? VP of the US – who are the Democrats honing in on? What is the big secret – It is now mid-July – the election is only 3 ½ months away… Is it Susan Rice? Is it Kamala Harris? Is it Val Deming or is it Tammy Duckworth? Or is it someone else that no one is paying attention to… Either way – when the announcement is made – it will create some initial volatility as investors and the algo’s weigh that decision… Is she center moderate? Is she far left? Can she reach across the aisle and bring the two sides together?

Then earnings and macro data.

This week is going the be the start of the guts of earnings… it’s bookended by two big Dow components – IBM today and AXP on Friday… in between we will hear from the likes of IBKR, HAL, ACC. CCK, PLD, KO, LMT, TXN, PCAR, SYF, PM, UAL, HCA NDAQ, KEY, APH, TMO, MSFT, TSLA, CSX, APD, DOW, TRV, LUV and more… how will these companies perform and will they offer any guidance at all…

This morning, we wake up to learn that Disney is slashing advertising spending on Facebook and Instagram… all for the same reasons – hate speech, voter suppression and loads of misinformation and they note – ‘It’s complicated” and remember – DIS was FB’s largest advertiser for the first half of 2020… so watch for weakness in the social media space and more importantly – watch for the reaction from Zucky and Sandberg…

US futures are slightly lower… but have rallied back a bit from being even lower overnight. Dow futures are -36, S&P’s are off 5, the Nasdaq is down 3 pts and the Russell is – 5 pts. Rotation talk is all the rage – but if we see loads of money coming out of the tech sector then we can surely expect the broader market to re-price but if investors/ asset managers are just trimming and re-allocating (as they should) then it’s nothing to get worked up about… but again – so much is dependent upon the combination of events over the next 3 months. Earnings will kick in this week and so the focus will turn to a range of individual reports… But do not discount today’s AZN vaccine results and the early line is that they will be positive.

European stocks are mixed… In fact, the EU failed to come to an agreement over the size and composition of an additional stimulus program over the weekend – so that conversation continues today… and as I mentioned on Friday – it is the ‘frugal four’ or more specifically the Netherlands that seems to be holding this up… In the UK – a British pharmaceutical company – Synairgen – is claiming to have a new virus treatment that reduces the number of patients in ICU units across the country. As of 6:30 am – the FTSE -0.59%, CAC 40 – 0.23%, DAX + 0.24%, EUROSTOXX  flat, SPAIN -0.25% and ITALY is -0.16%.

This morning oil is trading down 33 cts at $40.26 – there is nothing new to discuss – it’s just more about falling demand due to a surge in virus cases – we know that is not true… but it does help to create a story so they can trade it… We remain in the middle of the $35/$45 range.

The SPX closed at 3224. The focus today will be the AZN results and earnings… If the trial results by AstraZeneca are positive, then expect a broader push to the markets and if not – then expect a bit of a sell off – but early indications are that the news will be positive and the markets are cautiously awaiting. I believe that we are in the 3175/3250 range. 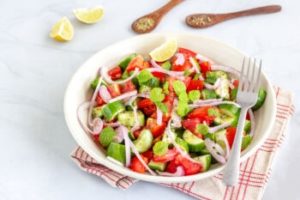 This is easy to make and works well with any summer dish.

For this you need – Cherry tomatoes (sliced in half), cucumbers, red onions, avocado,  feta cheese, a splash of olive oil and s&p.

Cut the cucumbers in half and then in half again. Now slice into small bite size pieces.  Mix the sliced tomatoes, cucumber and diced red onion. Add in the sliced avocado.  Season with s&p and a splash of olive oil and some fresh lemon juice. Now add in the crumbled feta and place in the fridge.  Remove 10 mins before you want to eat it.