Buy the Rumor, Sell the News – Try the Grilled Pizza

So AstraZeneca reports positive vaccine results from their trial – Great, right? Yes, but it sent that stock (AZN) plunging! Yes, I said plunging… the stock lost 4% on the news… and you ask me – How come? Because the stock had surged more than 21% since July 15th… that was 6 days ago… as investors reacted ahead of the actual news… it was a classic ‘Buy the Rumor, Sell the News’ play… they bought the stock ahead of the news (thus the rumor) and then sold it when the rumor proved to be true (thus the news)… capisce?

And the selloff doesn’t speak to the validity of the vaccine results by any stretch… all it does is reward the trader types that bought the stock for a trade… ahead of what too were betting was going to be a good result…yesterday’s move sent the stock back to $58.68 in what looks like a need to fill the gap ($53.60 – $56.30) created on July 15th when those rumors began… What is also appearing to be happening is a question mark from investors… even when we get the vaccine – Will people line up to get it? Who will be first? Will you wait to see what reactions might happen in a larger vaccine population size? I mean, I guess that could be true… and so that is the new concern for any of the virus candidates…

And then the news that a British bio-tech jumped into the fray with an announcement of their own adding fuel to the bio-tech sector… with the XBI rising 1.6%… sounds good, right? Well hold on, because it gets better – the Nasdaq went bonkers… WFH (Work From Home) stocks surging, again… and the WFH ETF rising $2.14 or 4.16%… Twilio – TWLO rose 10%, CrowdStrike – CRWD rose  5.2%, Zoom – ZM rose 8.9%, Plantronics – PLT – rose 1.1%, Amazon – AMZN rose  8%, Apple – AAPL surged by 2.1% and the list goes on… Even Facebook ended the day higher on a day when the news was not so kind to them… DIS pulls out of advertising on both FB and Instagram… (not good for Zucky and Sandberg)… the stock took it on the chin initially – falling 2.6% on the opening as the media opined on what this meant for FB and the ‘boycott FB movement’. It found a bottom early on and not only took back the 2.6% loss but then added 1.8% by the end of the day… as anything TECH – moved up. In fact, it was a ‘rising tide lifts all boats’ kind of day for TECH.

As the day wore on and the markets tried to discern the news and put it all together – we started to see the Nasdaq react… tech once again began to move ahead, and the WFH stocks were leading the parade higher… by the end of the day – the Dow added 9 pts or 0.03% – nothing dramatic, the S&P surged ahead by 27 pts or 0.84%, the Nasdaq blew up and thru two century marks…10,600 and then 10,700 before landing at 10,767 or +264 pts or 2.5%, while the Russell small and mid-caps came under pressure… as money moved out of this group and into anything tech…

We can thank the explosion of passive investing and the ETF crowd… everyone just gets allocated into these passive investments and go along for the ride… and it’s all good when the tide is rising… but again, just wait until the tide turns and everyone wants out at the same time… I mean it’s laughable. The XLK – S&P tech ETF is the ETF that ‘tracks the performance of the Tech Sector Index – it holds both large cap and mid-cap names’

OK sports fans… just two names – MSFT and AAPL – make up 44% of the index – 44%! Software and computer names make up 63% of the index… and when everyone  just ‘goes in’ because it gives them easy exposure – remember that that exposure cuts both ways… and we know that advances come in a stair step pattern while declines take the elevator and go straight down… Just an eye opener… so that no one is confused. Do we need to discuss the action from March 2020 or from December 2018? This is where ‘risk management’ comes to play… because this latest advance has clearly unbalanced your portfolio… So – pay attention to what you own, talk to your advisor – long term investing remains dynamic, not static.

This morning, US futures are once again surging… Dow futures + 160 pts, S&P’s are +25 pts, the Nasdaq is surging by 102 pts and the Russell is adding 21 pts. IBM reported after the bell and ‘beat the expectation’ and improved gross margins in 5 of their business units… the stock is quoted up $7 at $133/$133.50. In addition, congressional democrats are meeting with the White House to discuss another corona virus stimulus bill… this would be the 5th aid bill.

Earnings today include: KO, LMT, TXN, PM, COF, CMA… and on the economic front we will hear from the Chicago Fed… and the condition of the economy is that part of the country.

Overnight we find out that the Europeans have reached a deal… $750 billion package aimed at trying to stop the bleed of this unprecedented economic calamity… deepening the EU’s integration. In addition, they also agreed on a multi-year EU budget of more than 1 trillion Euros through 2027… European Council President Charlie Michel celebrates saying that:

“We did it.  Europe is strong and Europe is united. We have reached a deal on the recovery package and the European budget.  These were of course difficult negotiations in very difficult times for all Europeans.”

Now the deal still needs to be approved by the individual parliaments of the member states – which could present a problem but most likely not… Now while the EU economies have re-opened – many parts of it remain in a coma – think tourism and hospitality. Remember – there is still a travel ban so the billions of Euros that usually get pumped into those economies from both Asian and American tourists won’t be there – only exacerbating an already difficult situation.

Next up – we are starting to hear from Joey Biden and the DNC’s platform for the election… today’s headline – “The Caring Economy” is a $775 billion spending plan to increase child care and elder care – financed by none other than increasing taxes on real estate investors (incomes greater than $400,000) and improved tax compliance on high-income earners… (that piece undefined – ‘high income’). Now this is the 3rd leg of the Biden economic plan which calls for universal pre-school for anyone older than 3 and the elimination of the waiting list for home and community services under Medi-caid as it offers an $8k tax credit to help pay for childcare, caregivers and early childhood educators. OK great – but who is your running mate? At this point that news is what is on the top of investors’ minds… and will surely drive the action once announced. Look – Biden has made it clear – Expect higher taxes – period. Sectors to watch – include Real Estate, Financials for sure… Energy, healthcare and technology next.

This morning oil is trading UP… $1.03 at $41.84/barrel… today – the concerns over decreasing demand have been replaced by talk of surging demand as the world awakens… this conversation being started by none other than Goldman Sachs…who is now looking for oil to be in the mid $50’s by year end… last month they said this:

“When we turned constructive on the oil outlook last month, we argued that after the initial relief rally, the second stage of the oil market recovery — the cyclical tightening — would be gradual as the inventory normalization takes time and requires patience”…

And today they re-iterate that stance. In addition, we have Fawad Razaqzada from ThinkMarkets telling us that:

“With major economies opening – demand should pick up for oil and even more so if a vaccine becomes available soon”. Brilliant – is this something that they just realized? I have been screaming this for months now – as oil made its way higher… We remain in the middle of the $35/$45 range and I don’t expect it to break out until there is more clarity on the election, the re-opening, the virus and the vaccine.

The SPX closed at 3251 and is now positive on the year… (+0.65%) … This morning, it appears that it wants to try and fill the gap it created back in February as well. That gap was the collapse from 3337 to 3257… and if this morning’s action is any indication – we can expect the S&P to open at 3275-ish… clearly beginning to fill that gap… The sense is it wants to challenge and test the February highs of 3380! 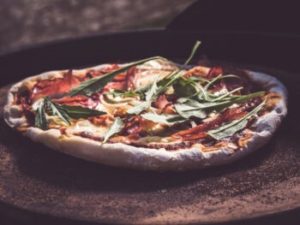 Pizza on the Grill

It’s fun, everyone can join in and create what you want.  If you have never tried it – may I ask –Why not?  Once you cook it up on the grill – you will find that you get a completely different texture – it comes out lighter, crispier and crunchy… delish!

When you are doing pizza on the grill, there are so many things you make it with… the only important key is – whatever you decide to use – make sure you have it ready to go… so set up an outdoor table with your ingredients and get ready to rumble… You need a wooden pizza peel, the dough, and toppings of your choice…

Today, we will use Prosciutto di Parma, caramelized onions, fresh cherry tomatoes (some crushed others sliced in half) tossed with fresh garden basil, olive oil, s&p, and shredded mozzarella (store bought would work but if you have an Italian deli that makes it fresh – go for it).

Start with a either a store bought or homemade dough… always let it come to room temperature before you even try to roll it out. If you buy a store-bought pizza dough, remove it from the package – flour it up and let it sit out on a plate – covered in saran wrap until it expands and is ready to go. Usually takes about 30 mins or so to come to room temp.

Light the grill – heat it up really hot – use your grill brush to clean it and then turn the heat to med… If you have a brush – quickly oil the grate… (do not use a spray to oil the grill grates while the grill is on – Hello!)

Next – flour the counter and roll it out… flour the pizza board and place the dough on it. Transfer to the grill… Once it is on the grill – Do not move it around. Using tongs – check it out once it starts to bubble… The bottom should be nice and crispy with nice grill marks. Remove and place back on the pizza board – Cooked side up. Now, whatever you are using to dress the pizza – but for today’s presentation we will add the tomatoes, caramelized onions, prosciutto and shredded mozz… return to the grill… once the cheese begins to melt – it should be done. Check it out with the tongs and using the pizza board – remove from the grill.  If you want, you can now add fresh chopped Arugula. Using a pizza knife – cut and serve.