Shake the Branches – Try the Minestrone 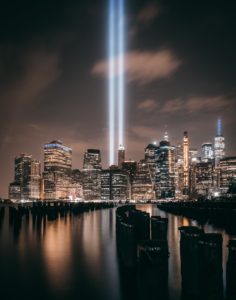 Never Forget… Today our thoughts and prayers remind us of that tragic day – a day that feels like yesterday for so many of us and day that none of us (born prior to the turn of the century) will ever forget. Born out of the ashes of that tragic day is a stronger America, a more patriotic America and a more caring America. For those of us that experienced what it was like in NY, DC and Shanksville, PA – my wish is that you are OK. And for all of those fallen and their families – my wish is that you are at peace (if that’s possible). Never forget – God Bless America!

Wait!  What did I say about Tech being the best performing sector on Wednesday???? Rewind – Energy was the WORST sector with Tech close behind… on Thursday! As the day started – and stocks attempted to continue moving higher – they hit a wall – and like I also said yesterday…

“All 3 indexes – the S&P, Nasdaq and the Dow all tested trendline support on Tuesday and held… but don’t get so complacent just yet… my sense is that we will test it again and then again… usually its 3 times before we can bet that it holds… the trader types will be in line trying to sell some of their purchases from yesterday (Wednesday) – as they skim pennies off the top… If the buyers walk away for now – watch how panicky the sellers get… the algo’s will see a void in demand and go into ‘panic sell mode’ again causing yet another re-pricing that shakes the branches again.”

Panic sell mode, Shake the branches… is that what I said?  Yes – and guess what? That is exactly what happened… Look – the surge higher on Wednesday was suspect to begin with – after the beating the markets took in the prior 4 sessions (Did I say Dead Cat Bounce?)

Word that Senate Republicans led by Mitchy McConnell were pushing a ‘lite’ version while the Democrats – led by Nancy and Chucky – wanted a ‘fuller’ version – and while the bill passed with a vote 53/47 – alas it was not enough… while it looks like a majority (it is) it was not enough of a majority (by Senate rules) to pass… the Republicans needed at least 60 votes to pass – which means that they needed the assistance of SOME Democrats to pass the any stimulus bill… but that was not about to happen… Nancy (and Chucky) stood their ground – refusing to reconsider this ‘liter’ version… leaving Americans in need – still in need – unable to move ahead after the forced shutdown of the US economy… Now, the idea is that if they continue to stall any further stimulus that this will hurt the GOP (and by default Trump) in the upcoming election… Hmmm… it appears to be a game of chicken… and the worst thing about it is that our elected leaders are NOT suffering, they still have a paycheck – (which maybe we should withhold as well), they still have healthcare – and not the healthcare that they are pushing on us, they have food on their tables and sheets on their beds… Here’s a thought – How about they all stop being so selfish and do what’s right…

It was the usual story – Tech (XLK) – 2.26%. which led the move lower for 4 days, led the move higher on Wednesday… and then once the market began to stall yesterday – guess who got hit again?  TECH… as they still remain by far the best performer… Do you need any more detail?

Energy (XLE) -3.6% – also suffered more than it should of – but the trader types are good at whipping it around – creating unnecessary angst… I mean last month when oil was surging it was all about surging demand as the world woke up… and then suddenly it isn’t… whatever… it is what it is… I do not believe that demand for energy is going away any time soon… and don’t forget – OPEC+ meets next week – and if this is still the story then expect them to reconsider cutting production to stop the bleed… either way – Energy names are a ‘value play’ not a ‘growth play’… so as long as you allocate some percentage of your portfolio to ‘value’ names – Energy should play a central role… because last time I checked – the need for energy is not going away… unless of course you are California… apparently they are ok with banning fossil fuels to power the state… good luck with that… as the rolling blackouts continue… did you see the tweet by LA’s Mayor  (@MayorofLA) at 3 pm every day? That’s when he warns Californians to turn off their AC’s (use a fan), shut off the lights, turn off their computers and don’t go into your fridge as they try to manage demand for electricity in the height of the day. Windmills and solar panels can only do so much for the 41 million Americans living in that state. I’m all about climate change and global warming – but rolling blackouts in America? Really?

Utilities, Industrials, Financials, Consumer Discretionary & Staples, Healthcare, Retail, Communications, Work from Home etc… all playing follow the leader… In any event – it is what it is… we have been talking about – we are now in the fall – a typically volatile time for the markets… for a number of reasons… and this year with all of the chaos created by the pandemic coupled with the upcoming election, loss of jobs, earnings season again in early October and the ongoing release of the macro data points, etc… we can expect more volatility in the days ahead… so pick your spots – do your homework and identify both buy and sell opportunities that will keep you on track and keep your portfolio in balance.

This morning – US futures are pointing UP… Is this another Dead Cat Bounce? Early indications suggest that the markets remain confused… Currently futures suggest that the Dow will rise by 200 pts, the S&P +13 pts, the Nasdaq would advance by 85 pts and the Russell is +13 pts. Look – the swift correction that we saw earlier in the week has managed to wake everyone up to the stretched valuations… and while some of the speculation has been shaken from the trees – do not expect this to be over just yet… Like I said yesterday – we tested trendline support on 3 indexes on Tuesday and bounced on Wednesday… we tested again yesterday and bounced again… It needs to test 1 more time before you can be more confident that it will hold… (still no guarantees – but history does support this view) – but remember – the end of September is coming – and we have Federal Budget Negotiations happening as well… and that always has the ability to throw a monkey wrench into the picture… so sit tight… at this time – patience is a virtue.

European markets are churning… the UK in positive territory while the rest of the ‘zone’ is lower… Trouble brewing between the UK and the EU… as EU (European Union) leaders urged the UK to forget any plan that will cause them to reneg on the current BREXIT withdrawal agreement (BWA) …UK PM Bojo – telling them to shove it… as he vows to push ahead… Additionally – the UK economy did grow at a 6.6% rate – in line with expectations… as they make a slow recovery… the FTSE is +0.25%, CAC 40 -0.09%, DAX -0.13%, EUROSTOXX -0.07%, SPAIN -0.67% and ITALY -0.14%.

This morning the S&P is now at 3339… We are well within the normal trading band… valuations were stretched and some may still be stretched and those will be re-priced as well… Again, I offer a word of caution as we move into the fall – I wouldn’t necessarily go chasing names here – September/October are volatile months… sit tight, do your homework and be patient.

On a side note – a bunch of Big Business leaders have penned a letter to NYC Mayor Billy (DiBlasio)-Wilheim and by default Gov Andy Cuomo – demanding that he do something to address the filth, the chaos, the lack of respect for its citizens in one of America’s greatest cities… otherwise be prepared for the continued mass exodus… What else do they both need to see before they address its downfall? 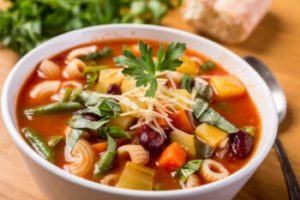 A lighter version of the traditional soup…

So, this is a great dish – easy to make, not heavy, gluten free, always helpful when you are trying to diet. – Fills you up without feeling stuffed.

Now take the plum tomatoes – cut in half and take the core (seeds) out. Dice into bite size pieces also – add to the pot. Now add the broth – add enough that you have covered everything in the pot by about an inch or so. Season with s&p – cover and reduce heat to simmer. Allow to cook for a couple of hours. Keep your eyes on it. Add more broth if needed.

Now – decide – are you using rice or pasta? If you want rice – do not use more than 1 cup – otherwise it grows and sucks up all the soup, if you are using pasta – only use about ½ box of ditalini – same reason – it sucks up the soup. (You can always add more broth or even water if it sucks it up.)

Add the spinach now and the rice or pasta. If using rice – it will need to cook for another 20 mins or so… if using pasta – it will be done in 8 mins or so.

Remove from heat – add the chopped basil, taste for seasoning and let it cool a bit.

Serve in bowls with a drizzle of olive oil and fresh grated cheese.