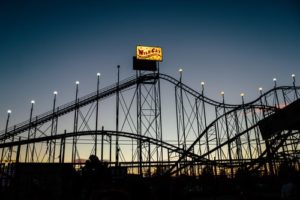 And the wild ride continued for a second week as tech stocks roil the market… sending the Nasdaq down 7.2% over the past 10 days… with the S&P not far behind giving up 4.8% and the Dow down 4%… the temper tantrum happening in tech is clearly because of building nervousness surrounding both seasonal factors, geo-political issues and the fact that TECH is such a ‘crowded’ trade has been the root of the most recent bout of volatility… in fact the VIX (Volatility Index) shot up 75% since September 1st  – in direct response to the selloff we witnessed beginning in September… (it has since given back 34% as the markets attempt to settle down -suggesting that maybe the worst is over for now…..(something I do not subscribe to at all…) and is sitting right on its short term trendline at $25.5-ish… Now VIX futures are suggesting more volatility in the next 2 months… and then the expectation is for the market to settle in post the election… another idea I do not subscribe to – because investors have to ‘brace themselves for election weeks vs. election day’. If there is no clear winner on November 3rd (which right now feels very possible) that means it will be contested for sure by both sides… and a contested election only produces even more uncertainty and uncertainty usually causes investors to shoot first and ask questions later… resulting in stocks selling off as investors raise some cash until there is more clarity…

By the end of the day and the week – the Dow added 131 pts, the S&P added 2 pts, and the Nasdaq lost 66 pts. Industrials (XLI), Homebuilders (XHB), Basic Materials (IYM) and Financials (XLF) all ended in positive territory while Retail (XRT) and Tech (XLK) took a hit.

Flash back to August 2000 – as we headed into the Bush/Gore Presidential election – an election that many millennials may not remember with any clarity… the market gave up nearly 14% between mid – August and mid-October as seasonal factors and election jitters caused investors to raise cash… It then rallied 10% between mid-October and election day as the market ‘assumed’ an outcome… only to give that all back and then some (Markets lost 13%) by December 12th, 2000 – when the Supreme Court rendered their decision… Leaving the country is a sort of ‘purgatory’ for 6 weeks post the election… the question this year is – Could we be in purgatory for longer than 6 weeks – if there are a bunch of contested states leaving neither side with a clear majority? And if so – what will that do to the investing psyche? Sit tight – all this means is that there is sure to be some ‘bumps’ in the road ahead… which once again suggests that if you are a long term investor – talk to your advisor, build a bit of a more defensive portfolio and stick to the plan… time is on your side…but if you are more short term oriented –then maybe you need to consider how much exposure you have to stocks at all and if you’re a day trader – then you are constantly moving and shaking – you want there to be even more volatility  which creates more opportunity…

In the end – we all play in the same sandbox – so we must learn how to co-exist in a complex world… and the long term investor needs to understand how to eliminate the daily noise – which only seems to get louder and louder… especially at this time of year – which is usually the rockiest for the markets… and this year is no different… besides the election – which is by far the elephant in the room – we are still dealing with the pandemic and what that is going to mean as we move into winter; Will we get a vaccine and if we do – how many people will actually take it vs. not and how will each side tell the story? Next – Trade relations between US/China, fiscal stimulus policy, Central bank policy, macro data reports, looming inflation, looming recession, and the next round of earnings reports which start in 4 weeks….and what forward guidance will look like… So, as expected – there is lots to consider no matter who you are… your job is to make sure you are in the right lane.

Overnight – Asian stocks managed to rally – Japan has elected a new Prime Minister – Yoshihide Suga will succeed Shinzo Abe – and the expectation is for ‘business as usual’… no change is expected in the current course of ‘Abenomics’ for now. In addition, there is lots of individual corporate news swirling around but no macro data events to fuel the action. Tomorrow China will reveal Industrial Production and retail sales data. On Thursday the BoJ (Bank of Japan) will release their latest policy directives… by the end of the day – Japan +0.65%, Hong Kong + 0.56%, China + 0.51% and the ASX +0.68%.

In Europe stocks are not as convinced… with a mix of action across the continent… none of which is causing any outsized moves in either direction. AstraZeneca announced that they have resumed Phase 3 trials after halting them last week – which was just one of the issues that rocked the markets… and this comes as the virus continues to re-emerge around the world – not just here in the US… leaving many scientists to call this trend ‘disturbing’. Eurozone Industrial Production did grow by 4.1% but is slowing down causing continued concern over their rebound. The BoE (Bank of England) will also report their latest policy decision on Thursday as well.  As of 7 am – the FTSE is -0.18%, CAC 40 +0.14%, DAX -0.03%, EUROSTOXX -0.02%, SPAIN +0.06% and ITALY -0.14%.

In the ongoing drama over TikTok – ByteDance (Chinese owner) has rejected MSFT’s bid to buy the US division of TikTok and instead has chosen Oracle as a ‘US Technology Partner’ – allowing Oracle to take a significant stake in the company… this is still unclear how this solves the problem – so expect lots of chatter on this today and in the days ahead… Does this partnership resolve the data sharing issue that is at the root of the problem? Do we really believe that it does? Look – at the very least – be sure to watch ‘The Social Dilemma’ on NFLX… it’s disturbing to see what silicon valley has done to the world, but it also highlights how we allowed it to happen…in any event – It is a must see… And since we have allowed all of our data to be collected by these behemoths – and they use our data to make their money – then my thinking is – eliminate any tech lobbying firm out there and TAX them hard… We’re sure to have a budget surplus once this is done….and think about it – WE are actually the ones paying for it…since it is OUR data that they are using….so let them pay the gov’t on our behalf… I don’t know – it makes sense to me… Thoughts?

Oil remains under pressure… more demand concerns – driven by the virus – continue to drive the action… new supply from Libya and a couple of impending hurricanes stirring the latest concerns. Brent crude is down 5 cts… at $37.27 – just barely below trendline support… but not collapsing by any stretch… OPEC+ will meet this week on the 17th – and this morning they just cut 2020 demand forecast and trimmed the 2021 forecast… so stay tuned for any new news concerning production cuts or not.  Until then – it feels like we found a bottom right here…

This morning the S&P is now at 3340… and with futures up strong – we could see a race back to 3400… before the closing bell rings… Remember – We are well within the normal trading band… valuations that were stretched have been re-priced… and today’s rally is sure to be just more of the snapback from the beating some names have taken over the past 2 weeks… If you are a long-term investor do not chase any names – sit tight…you’re invested so you are participating…September/October are volatile months… sit tight, do your homework and be patient.

San Marzano – where is it?  Well there are a couple of places in Italy with that name – but the San Marzano – that grows the greatest tomatoes is in the south of Italy – in Campania (the countryside) in a place called:  San Marzano sul Sarno – in the province of Salerno (anchoring one end of the Amalfi Coast) – the other end anchored by Sorrento.  This area is known for its volcanic soil (Mt. Vesuvius) and temperate climate which are both believed to contribute to their amazing flavor.

This recipe is simple – for this you will need:

Begin by massaging the steaks with olive oil, and s&p. Simple – now set aside.

Next – in a med saucepan – heat up some olive oil, add the sliced/crushed garlic and the diced onion.  Sauté until soft and golden and the onion begins to melt.  Now add the San Marzano’s – crushing by hand as you put them in the pot.  Next add in the torn basil leaves.  Bring to a boil and then turn to simmer.  Stir occasionally until the sauce thickens a bit. Taste and season with S&P.  Set aside.

Heat the grill.  Clean the grate with a grill brush – but get it nice and hot so that the steak sizzles when you place it on the grill.  Then turn heat to medium – close the top – but stay close.  You should grill to your liking – maybe 4 mins/side (depending on thickness) should give you a med rare steak. So go from there.

Once done – remove from the grill.  Using a small ladle – spread some of the tomato mix on the plate – place the steak on top and then add a dollop on top. Serve with a large mixed salad in a Balsamic/Olive oil dressing.  Enjoy a nice red wine.