I made it clear in yesterday’s note… the focus was once again the Covid Monday Trade! More good news out of the biotech world, and that was enough to set US markets on fire even in the face of various lockdowns and new restrictions on Americans… The rotation into cyclical value names continues and news that the Trump administration is now working with the Biden transition team (for what should be an orderly transition) helped to fire up the markets. Then at about 3 pm –  Joey announced that he will nominate former FED Chair Janet Yellen to be the new Treasury Secretary and that news only stocked the fire… Recall that it was Janet who suggested that the FED be allowed to BUY STOCKS during the height of the great financial crisis! The Dow surging by more than 1.1%, the Russell ahead by 1.85% while the S&P and Nasdaq played a supporting role up 0.56%n and 0.22% respectively.

You see the Manufacturing, Services and Composite PMI’s (Purchasing Manager’s Index) were ALL better than expected – and that is bullish, but it is also a sign that the inflation monster may be getting ready to rear its UGLY head (and when it does, it is sure to be very UGLY) … You see, The Manufacturing Purchasing Managers Index – is a report on the state of business in the Union (the Union here being the USA) – and it is a number that is closely watched by everyone… Including the algo’s. The monthly questionnaire is used to identify M/M changes in 10 segments.

Now notice the bold typeface… because that is the key to this issue. Are companies paying more for products and services? Because if they are – guess what? Those increases will be passed onto you – the consumer… are you following me? So if the company passes on higher costs to the consumer, that means that the consumer is paying more for the same product month over month. And the definition of inflation is: The general increase in prices and the fall in the purchasing value of money – and for some people in the gov’t – who already think that inflation is non-existent – all I can say is – have you gone food shopping lately?

Anyway – if inflation begins to boil over then my bet is that any control mechanism will malfunction (meaning that the FED will be unable to control it…) – my sense is that as prices begin to rise, they will rise quickly and then the FED will have to raise rates in FULL percentage point moves… None of this ¼ of 1% stuff… and when that happens… well, do I really need to tell you what’s next? Just think of all the money that every central bank around the world has contributed to try and stabilize the global economy… it has been UNPRECEDENTED and at some point it will be time to ‘pay the piper’. And now you want to know why Bitcoin is piercing $19,000? Is Bitcoin the new canary in the coal mine?

Do I need to remind any of the baby boomers (or teach any of the millennials or Gen Zer’s) what it was like the last time inflation spun out of control? It was the early 80’s, we had just come out of the Carter Administration – the economy was a MESS… a complete MESS.  Unemployment was 10%, INFLATION WAS 14.76% and interest rates were… 20%! Risk free savings… just go to the bank and give the man your money and you were guaranteed to earn 20% – sleep at night, no risk! Now, I’m not being dramatic here at all, everything I just told you was true in 1980… and History DOES have a way of repeating itself… Look – rates have been at unrealistic low levels – zero or negative – for a decade now… inflating a range of assets… but once that music stops playing – it STOPS PLAYING… Capisce?

Right now, you put all your money into the market because you can’t earn any money on savings… well if suddenly you can earn 6%, 8%, 10% (or better yet 20%) on your money in the bank with no worries – mmmm – You tell me what’s next! And don’t think it can’t happen – my sense is that when it starts it will happen fast – which is why I think it is illogical for the FED or anyone else to suggest that rates will remain low through December 2022 (yes, they say it, and yes it soothes the markets at the moment – but in my opinion – there is no way that rates will be at this level in December 2022 – Anyone care to take the other side of that bet?) It’s too long of a bet, so much can happen that will change the plot of the story… (and we can start with the new administration and the policies that are being floated – that’s not a negative, it is just a statement of fact) Now that does not mean that you change your strategy right now – it just means – long term investing is NOT static, it is dynamic and you need to make sure that you’re your advisor is as dynamic as the markets. Look, I’m a BOOMER, I’ve been through a couple of the cycles. Don’t hate the gray hair or the white beard…

Overnight – markets around the world got to react to the Janet Yellen news… and it is significant news… She is considered fairly dovish… she was a great FED chair during a very difficult time in the history of the country and the world… the idea that she is now going to break this glass ceiling and become the first woman Treasury Secretary after being the first woman FED chair is significant and exciting for her and for the country. She is a great selection – and it would be very difficult to see how the Senate would NOT confirm her in this role. And so markets are surging…

US futures are on fire… the Dow up 302 pts, the S&P’s are up 28 pts, the Nasdaq is up 40 pts and the Russell is up 28 pts… Today it is about the ‘smooth transition’ and the newly named cabinet picks for the incoming administration. The sense is that Yellen is market friendly, she is a known commodity, she is a good communicator, and it appears as if Biden has signaled that he is focused more on the economy vs. aggressive regulatory policy – and the market likes that. And yes, while the virus and the vaccine remain on the stovetop, the focus today is on the developing cabinet. Expect to also hear more about what is going on in Georgia… in terms of that state’s Senate runoff.

And this morning we are learning that 87 yr old, CA Democratic Senator Diane Feinstein is stepping down from her leadership role on the Senate Judiciary committee ‘after facing blowback from the progressives’ for not being more aggressive during the ACB (Amy Coney Barrett) Supreme Court Confirmation Hearings – More aggressive? She could have screamed and yelled all she wanted to, the fact is that the GOP was in control so the outcome was known… I guess the ‘progressives’ didn’t understand the rules. And that is sure to be news… or at least it should be – let’s see which channel picks up the story – because it foretells what we can expect from the far left within the party… They were unhappy with her and so they forced her out… OK – so who is next? How will Joey handle the dissension within the ranks?  Because you know it is coming… They have made it very clear that they intend on hi-jacking the party. Which is why the Georgia race is so important – it’s about checks and balances – that’s all… It keeps everyone honest… (if that’s possible).

In Asia – investors there are celebrating… Japan which was closed for a holiday on Monday played catch-up and soared by 2.5% while Hong Kong was up 0.39%, China was actually a bit lower – 0.61% and the ASX +1.26%.  It was more of the same… the virus, the vaccine and now the news that the US transition has begun… and the Yellen news? Investors are loving it!

Eco data today includes: Housing Price Index of 0.8% and a lot of CoreLogic housing data, not usually market movers. We will also hear from the Richmond Fed… exp of 20.

And Oil!!! Oh, boy – it is on a run… up another 50 cts/barrel or +1.2% piercing up and through $43 to trade at $43.56/barrel… it is more of the same… the progress on the vaccine, the logistics and distribution plan  and the excitement that that is bringing, the Biden Transition now under way, the excitement about Joey’s recent cabinet picks, and the fact that ‘mobility data’ is suggesting that airplanes and cruise ships and freight transports are on their way back baby… all adding to the excitement.  We are approaching the August highs of $45… leaving us smack in the middle of the $40/$50 range… a range that feels like normal… (if there is such a thing).

The S&P closed at 3577 – up 20 pts… after testing as high as 3589… just 11 pts shy of the next century mark of 3600… A level that we will pierce as the opening bell rings at the NYSE… 3645 is the early November high and it is very possible that we challenge it and attempt to push up and through. Now – December can be a volatile month… but with the WH fight all but over, the vaccine only weeks away from being available, news of a Biden cabinet coming together and the upcoming FED meeting where no change is expected all on the horizon – we will mostly likely see the famed ‘Santa Claus Rally’ into the end of the year… I can’t wait to ‘ring the bell on 2020’ – time to move on! 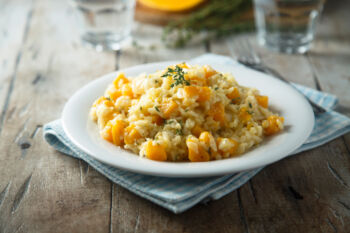 Start the Thanksgiving meal with Pumpkin Risotto… it is a hearty dish, and quite filling – so just serve up a taste for your guests to enjoy.

Heat oil and a dollop of butter in a large pot over medium-low heat.  Add shallot and cook, until shallot is softened, about 7 minutes – (remember to stir).  Add rice and cook, stirring constantly, until rice is translucent, about 8 minutes.

Now add wine and cook until wine is mostly absorbed, then add 1 ladle of broth and stir, until liquid is mostly absorbed, when almost completely absorbed – repeat the process again… now add pumpkin and stir to combine. Add remaining broth one ladle at a time until fully absorbed before you add more… (capisce?) do this until rice is tender yet still slightly firm to the bite…in fact you may not use all the broth. Depends on how much rice you used…

When complete – fold in about ¼ c of heavy cream… (You can always taste and add more if you like) another tblsp of butter, season with pepper to taste (do not add salt – the cheese should be salty enough). Divide risotto among warmed bowls sprinkle with parsley and serve.   Now to make a real impact – shave some cheese over the top then sprinkle with the parsley… Serve immediately