Stocks Surge – What Does it Mean? – Try the Rib-Eye

Stocks surged on Monday… as the countdown continued… which tells us what? A Biden win? A Trump win? I mean – covid19 cases around the world are surging, while a handful of European countries are in various stages of lockdown, earnings continue to ‘beat’, no stimulus out of DC, US cities are boarding up storefronts in preparation of expected chaos, yesterday’s economic data could not have been stronger and the polls are getting tighter in the key races across the country as early voting surges to never before seen numbers (more than 90 million ballots cast so far). Social media platforms NOT helping at all – in fact I would say that social media platforms have been at the root of all the noise and chaos… Anyone care to opine on that? I mean – think about it… and ask – What have we done?

Last minute campaigning also could not have been more divisive and different between the GOP and the DNC… yet – the markets surged (and are surging again this morning) as the presidential election season comes to a head… leaving many to think it will be contested (myself included because Donny has already made it clear that he has a cadre of lawyers ready to challenge tonight’s outcome and while the Dems haven’t explicitly said it – you know that have the same amount of lawyers ready to go as well).

But the markets decisive action yesterday and this morning suggest a different outcome. While many are now saying it will be decisive – what does that mean? Half the analysts saying it will be a Blue Wave, while the other half suggest that it will be a Red Wave – I still believe it will be a close race thus it will be contested before we get a ‘winner’, I do not believe it will be a landslide on either side. I mean look – everyone wants it to be definitive and definitive for some means that they want to see the congress controlled by one party… this way – the country would get more clarity on a  range of issues – more stimulus, taxes, healthcare, regulation, never mind the supreme court and immigration. In the end – that is the way it may go… but we aren’t gonna know that tonight. And today just after midnight – Dixville Notch, NH cast all of their 5 votes – and the winner was? Biden by a landslide (he got all 5). So, are these 5 people indicative of the country? We are about to find out.

In any event – as noted above – the latest economic data could not have been better… manufacturing is expanding at a fast clip… The ISM reported that US manufacturing rose to 59.3 – well ahead of the expected 56. ISM employment also surged to 53.2 up from 49.6. Today’s eco data includes: Factory Orders exp of +1%, Durable Goods exp of +1.9%.

And earnings… yes, they continue to beat on both the top and bottom lines… so it’s difficult to say that the broader economy is having difficulty… but when you drill down to the micro economy you hear a different story… small businesses slaughtered, travel and leisure hammered, energy getting hit over the head because of covid lockdowns, falling demand/rising supplies.

And expect today to be all about expectations… and speculation… and exit polls. Watch as the media tries to find correlations between this election and prior elections of the 20th century. Everyone opining on what the outcome will be… and that will be the way it is for the next 24 hours… and maybe even a month or so – as the contest drags on. In any event – until and unless the economy continues to improve it would be against all odds for a Biden administration to pass higher taxes across the board if he intends on locking down the country again. Good luck with that…

US futures are UP big… and global markets are all ahead fairly substantially… Dow futures are +447 pts, the S&P’s are ahead by 46 pts, the Nasdaq is adding on 96 pts and the Russell is adding 30pts. As expected – some of the talking heads are giving the lead to Biden while the others are giving Trump the win… while the Senate remains in play… in the end – investors and algo’s will react the way they react – we can all predict what should happen or what will happen, but in the end – it will be what it will be. And by the way – we will get through this as well and hopefully will be able to heal – because if nothing else – this election has torn families and friendships apart… and that is inexcusable. This is America… What have we done to ourselves?

Asian markets all ended substantially higher… the RBA (Reserve Bank of Australia) cut their cash rate target to 0.1% leaving it just a hair above going negative. A place that they assure us they will not go. There was no other economic news across the region – so the focus is on what we will do. Japan +1.4%, Hong Kong + 1.94%, China + 1.24% and the ASX +1.94%.

European markets are surging as well… the media over there predicting that Biden is in the lead and will pull this out… 52% vs. 42%. There are no economic data points to report and while earnings continue – no one is really paying attention… UK clients of mine are telling me that they don’t believe the polls and that they expect Trump to win… in fact what they are saying is that ‘people don’t tell the truth to pollsters… especially in such a divisive, contested election.’  As of 7 am – the FTSE + 1.64%, CAC 40 + 1.8%, DAX + 1.6%, EUROSTOXX +1.6%, SPAIN + 1.5% and ITALY + 1.9%.

If today is a big landslide in either direction, then the argument should be over… but my guess is it won’t… I only hope that the country does not slide into civil unrest – because the chaos is possible from either side. Both the far left and far right have the ability to cause chaos… I hope that is not the case. In any event – talk of the next stimulus package will come to the top again and depending on who wins will determine the size and extent of that program… The GOP with a $2 handle package while the DEMS will surely have a $3 handle package…

The S&P closed at 3310 yesterday after trading as high as 3330… a level I was surprised to see as I thought we would have hit resistance at 3307… trendline resistance… but we blasted right through it as it appeared to be a bit of a technical bounce coupled with an election outcome… and this morning – a bounce higher is in the cards. If nothing changes – the S&P will open at about 3350 putting 3400 in the line of sight… 3400 also represents the next trendline resistance level. Strap in – anything can happen… stick to the plan and stay the course. 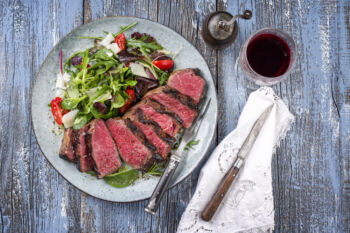 Season your rib-eye with S&P and massage with a touch of olive oil… allow to rest at room temp for 15 or 20 mins.

Place on a warmed plate and cover with fresh arugula, chopped red onion (optional) and slices of the Grana Padano. Serve immediately with a house Chianti. There is no dressing on the arugula – this dish is about simplicity.