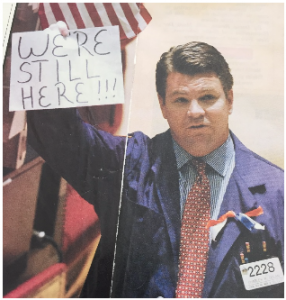 The picture above was taken on the New York Stock Exchange floor on September 17, 2001. I had the week of the 11th off and had just celebrated my oldest son’s first birthday on the 6th.

On the morning of the 11th, I started the day with my normal ritual of grabbing a coffee at the local Dunkin’ Donuts which was located in a gas station. The service station had a TV for customers to watch as their vehicles were being repaired. I glanced upward to see a reporter explain how a small plane had hit one of the World Trade Center towers. Like many, I couldn’t believe how on a picture perfect day someone could have made this mistake. On the way back to my home I called my wife and asked her to turn on the TV and that’s when the second plane hit. We had planned to get a sitter that day and play some bad golf but obviously those plans changed. We continued to watch in horror for the next few hours as the other events of that day unfolded.

My older brother John and I spent close to twenty-five years working on the floor together as Specialists (market makers). John was in on the 11 th , as was the rest of our firm. I tried in vain to reach anyone and kept praying they were out of harm’s way. Not knowing what was happening was difficult but paled in comparison to what I assumed all of my colleagues were experiencing. John arrived home later that day. John and I live in west Jersey, near Morristown, and John’s trip took him through Staten Island where he assisted our office manager in getting home and hitched the rest of the way. Covered in dust, he was picked up near the Verrazano Bridge by a complete stranger who drove him all the way to our town. A trip which on that day was most likely an hour long. That’s what people did that day! John offered to pay for his ride, but the driver refused, so he stuffed $100 into the glove compartment.

The next week proved to be almost too much to bear as we began to understand the loss that had taken place. In particular, I recall learning the firm of Harvey, Young, Yurman had a meeting at Windows of the World that morning and most of the firm had perished.

Robert (Bobby) Sutcliffe used to stand directly across from me on the floor and knowing he would not be there when we returned was heart wrenching. As the week of the 11th came to a close sadness began to be replaced with anger and resolve to show the world that we could take a hell of a punch but rise to our feet and fight back.

I used to commute with John and two other brokers. During the weekend of the 15th, we made a plan to take a 4:30am train on Monday the 17th from Gladstone, New Jersey. We assumed we would have to take a ferry, due to the loss of the Path system, and wanted to leave enough time for complications. We packed bags believing we would have to stay somewhere in the city for the next few days and made our way to the station. When we arrived in Hoboken it was still somewhat dark, just enough light to glance across the Hudson and see an eerie glow from the gaping void which formerly housed the Trade Center. As the ferry pulled away from the pier there was utter silence. Watery eyes glanced across the dark river in disbelief and a fear of what was a normal day would never be experienced again. The ferry slowly circled lower Manhattan and dropped us off by the Seaport where terminal workers handed American flags to all the emotionally drained passengers. I must say in hindsight that NY Waterways did an amazing job in providing transportation during a very difficult time.

We winded our way through the lower east side and various security checkpoints guarded by heavily armed military personnel. We came around a corner onto Broad Street where we glanced up to see the facade of the Exchange draped with a huge American flag. The next 9 or so hours proved to be some of the most memorable hours of my life.

The floor of the NYSE has often been described as one of the greatest melting pots in business. This community has always been comprised of strong personalities who don’t shy away from confrontation. In order to survive you had to be tough, quick minded and most of all have a great sense of integrity. It also helped to have a sense of humor because all of the stories you’ve heard are true!

My partners and I made it to the floor around eight o’clock or so. The visitors gallery was already inundated with the press who wanted to document this important opening and witness the carnage which was about to take place with respect the market’s reaction to the attacks. I was approached by Lou Dobbs who asked, “so what do you think?”; I said, “two weeks ago I had a friend who would stand where your standing now– we need to ring this bell for him and let these bastards know they can’t take us down.”; It was at this moment I felt compelled to write the sign held in the picture above. I wanted to send a message to the cowards who had to use innocent life to make their statement. I wish I could have been as eloquent as Mike Moran, a firefighter who at a benefit concert in Madison Square Garden said, “Osama Bin Laden you can kiss my Royal Irish Ass!!”; but don’t think my boss, John Lyden, would have been happy with that move. The world needed to know that we were back in business. It was a small role the floor community could play in the healing process of the country. First Responders rang the opening bell in what was the most anticipated and watched opening in the NYSE’s history. The day was filled with emotion but perhaps most difficult for me was to see some of the wives of our colleagues from Harvey, Young Yurman who were attempting to keep that business running. The outpouring of support for their effort was incredible to witness. The opening process was orderly and fluid and cooperation between brokers was amazing. We worked our way through the day and offered each other solemn handshakes as the closing bell rang. “One day at a time and we will get through this together.”

I am truly blessed to have been part of the NYSE. It was the most amazing group of people I have ever had the privilege of knowing. Their strength, integrity and perseverance have been unmatched in all of my life’s experiences. It was an honor to be part of that fraternity and I will always look back on my days there as a highlight of my life. To all who were lost and your families God Bless you, and to all who were there with me, I thank you for your friendship and will never forget your effort that day in helping Freedom Ring!